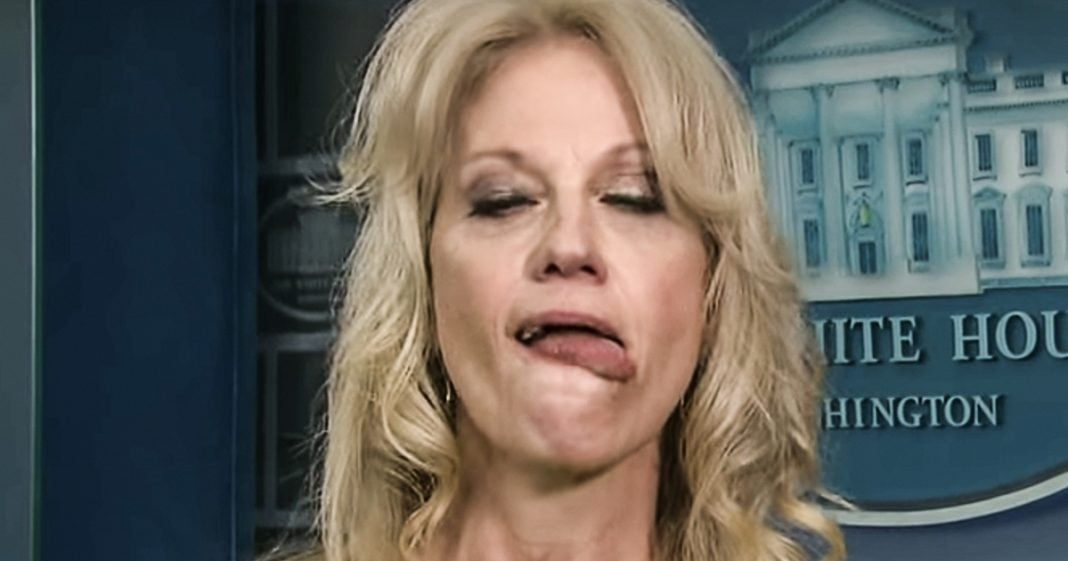 Kellyanne Conway proved that she isn’t the brightest bulb in the Trump administration this past weekend when she took the time to praise a tweet by the Vice President that was actually from a Mike Pence fan account. Twitter users were quick to mock Kellyanne’s lapse in judgement and inability to distinguish between parody and reality. Ring of Fire’s Farron Cousins explains why this story is more important than it appears.

It’s been pretty obvious to most of us for quite some time now that Kellyanne Conway isn’t exactly the brightest bulb in the Donald Trump White House. But recently she proved just how stupid she can be when she actually tweeted out a compliment to a Mike Pence fan account on Twitter thinking it was the actual Mike Pence. Here’s what happened.

This fake account was talking about a potential Supreme Court nominee that Trump may put forward. They were attacking Washington Post’s Chris Cillizza or, excuse me, CNN’s Chris Cillizza because I guess he had mentioned this woman’s appearance. That pissed off the Mike Pence fan account on Twitter, saying, “Oh, you’ve reduced her to her looks,” and it was a big, long thing. Kellyanne Conway responds with this: “@VP calls out sexism and shows what it means to be pro-woman.”

The only problem, again, is that this was a self-identified fan account on Twitter that Kellyanne Conway somehow thought was actually Vice-President Mike Pence. I mean, it’s not like this was somebody pretending to be Mike Pence. Yes, they had a little picture of him as their avatar, but on their Twitter bio, it clearly says “Fan account,” not to mention the fact that they don’t have the little blue verified check mark next to their name like Mike Pence has for all of his accounts. Kellyanne Conway didn’t take a couple of seconds to even look for that before she tweeted out how much she loves this man and how pro-woman he truly is.

See, this isn’t just a funny story about Kellyanne Conway. This is a serious warning for everyone in this country. Kellyanne Conway, with the exception of maybe Mike Pence himself, has been one of the longest serving people in the Trump administration. Considering they’ve only been around for 18 months and yet she’s still been there longer than most other people, that’s really saying something. But it’s also saying something about the woman who has the ear of the president. She wasn’t even smart enough or maybe just not careful enough to know who she was tweeting at. If she can’t take the time to get something like that right, how can we ever believe anything she says because we know she doesn’t take the time to double check? She doesn’t take the time to verify. She doesn’t take the time to get all the facts. She just blurts out whatever comes into her stupid head at the moment and that’s what the public is left with.

This is more important than I think some people realize. This wasn’t just Kellyanne Conway slipping up. This was proof that this woman doesn’t know what she’s doing. She has no business being in this administration if she’s not willing to take the extra three seconds to make sure she’s talking to the correct person. That is a problem. It is a problem for the federal government, it’s a problem for the country, and it’s a problem for for any media outlet that wants to put Kellyanne Conway on TV. This woman has no credibility, she has no fact checking abilities, and she doesn’t even care if she’s right or wrong or talking to the correct person. This is why she is so dangerous and this is why all of the people who out there say they love Kellyanne Conway are also so dangerous.