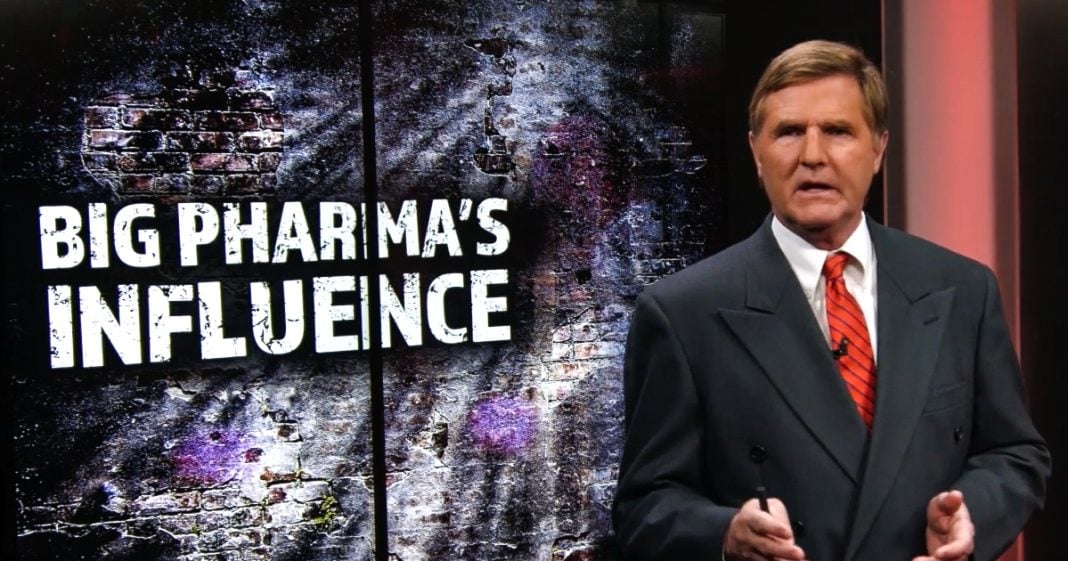 With the exception of CBS, every major media outlet in the United States shares at least one board member with at least one pharmaceutical company. To put that into perspective: These board members wake up, go to a meeting at Merck or Pfizer, then they have their driver take them over to a meeting with NBC to decide what kind of programming that network is going to air. America’s Lawyer Mike Papantonio discusses the connection between Big Pharma and Mainstream Media outlets.

With the exception of CBS, every major media outlet in the United States shares at least one board member with at least one pharmaceutical company. To put that into perspective: These board members wake up, go to a meeting at Merck or Pfizer, then they have their driver take them over to a meeting with NBC to decide what kind of programming that network is going to air.

And for those board members who aren’t pulling double duty with a Media conglomerate and a Big Drug Company, they still understand that they can’t be mean to Big Pharma because they pay the bills. Drug companies spend about $5 billion a year on advertising with these media outlets.

So when you have a case against Pfizer, Merck, Eli Lilly, or any of the other major pharmaceutical companies, do you think those board members are going to let you get on the air and tell your story? Or are you naïve enough to believe that they really don’t interfere with day to day operations?

It can take anywhere from 3 days to a full week before the media reports on a drug or medical device recall, if they report on it at all. In the case of Invokana, it took 32 days before media outlets reported about an FDA warning about the product creating too much acid in the bloodstream. The FDA began warning about the dangers of Cook IVC filters as early as the year 2010, and it only took about 5 years before the media started paying attention. And it’s worth pointing out in these instances that it was only through non-corporate, independent media outlets that these stories were told at all.

And you can replace “IVC” or “Invokana” with any other drug or product and the story is always the same: Stryker Hip Impants, C8, Vioxx, RoundUp, Xarelto, Essure, Talcum Powder. The corporate media doesn’t care about these stories because they either share board members with these companies, or because they want those companies to keep throwing ad dollars their way.

These gigantic media corporations are not going to do anything to threaten their relationships with their biggest advertisers, and one way or another they are always going to express the ideological views of their owners.

Fortunately, an increasing number of Americans are starting to wake up and realize that the mainstream media should not be trusted. In recent years, we have seen the alternative media experience rapid growth. The mainstream media has been losing credibility at a staggering rate, and Americans are starting to look elsewhere for the truth about what is really going on.

Do you think that anyone in the mainstream news would actually tell you that we are facing a horrific derivatives bubble that could destroy the entire US financial system and send us back into a massive recession all because of Wall Street greed? Do you think that anyone in the mainstream media would actually tell you the truth about the voracious greed of Goldman Sachs? Do you think they want to talk about the fact that DuPont’s deadly toxins can be found in the bloodstream almost every living creature on this earth? Those stories are too complicated for the dumbed down corporate media.

The corporate media can’t handle complex stories anymore. They don’t understand the link between crony capitalism and the revolving door between the FDA and drug industry, so they wouldn’t talk about it even if they were allowed to. They aren’t capable of connecting the dots that we have to connect in trials every day. They simply don’t understand it, so they don’t talk about it.

But the media is only one side of the story here. Big Pharma knows that if they want to continue manipulating the public, the have to start with our elected officials in Washington, D.C.

According to Open Secrets, Big Pharma spent more than $58 million dollars on politicians in 2016, the most amount they’ve spent on direct contributions in the last quarter century. And when it comes to lobbying, few industries spend more than Big Pharma – last year, the industry spent a staggering $244 million dollars to influence our elected leaders in Washington, D.C.

And it looks like things are about to get much worse. You see, Big Pharma understands that their ridiculous price markups, their price gouging, that it draws negative attention from the American public. And no matter how much they spend on advertising or buying our politicians, which they do every single day, they can’t keep public anger down.

So according to a new report by ProPublica, drug companies are offering huge money to scientists, people I call biostitutes. They’re professors or academic willing to author studies showing that these drug markups, this price gouging is necessary and that’s it’s good for Americans. That’s really the story that they’re going to get these biostitutes to tell all over the country.

Big Pharma has managed to manipulate our media; they’ve manipulated our politicians and now they want to corrupt the scientific community. But what were going to see after we see this story created that, ‘price gouging is just fine,” we’re going to see the stories emerge in Universities, and then corporate media is going to take those stories, and they’re going to plaster it all over the air, trying to convince you that; 6000%, 10000%, 15000% markup for a drug is just ok with the American public. That’s gonna be what they do in the next six months.