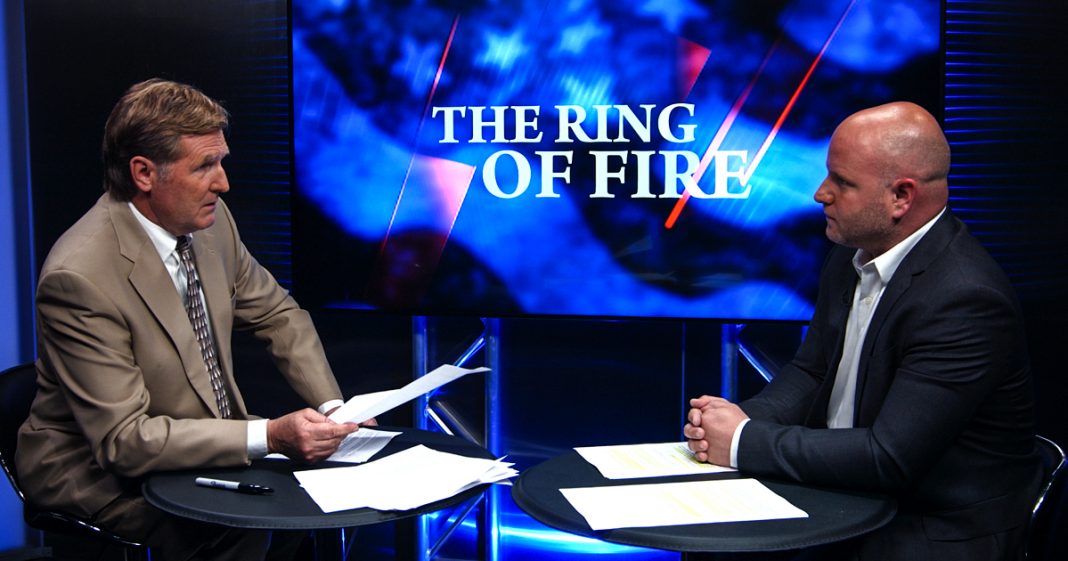 There’s been a ton of coverage of US domestic policy recently, and what the US is doing overseas is being largely ignored. But let’s not forget that we’re still actively bombing around the globe and defense contractors are making a killing. Ring of Fire’s Mike Papantonio and Farron Cousins discuss this.

Mike Papantonio: There’s been a ton of coverage US domestic policy recently. And what the US is doing overseas, is being largely ignored. But let’s not forget, we’re still actively bombing around the globe, and defense contractors are making more money than they have made in generations. So, this story that’s developing right now, as I’m looking at this story, I’m thinking about how sometimes you watch MSNBC, we’ve talked about this, you’ll watch CNN, you’ll watch one of the other shows, and you’ll see a Boeing missile advertisement, and we’ve talked about this before. I think this really makes an important point. You’ll see a Boeing missile advertised on MSNBC. Now, you have to ask yourself, and I gonna go buy a Boeing missile? No, of course not. But it’s on MSNBC because Phil Griffin, who runs MSNBC, likes the advertising dollars, and he’s willing to chum up a war at the drop of a hat. One war they’ve been chumming up, I really do believe, you can argue with me, I know you don’t totally buy into what I’m selling you, I think there’s a direct connection here, this dissent between Russia and the US.

It started off as a political … you had Hillary lose and Podesta was shown to be the idiot that we’ve always said Podesta is. And the next thing that happens is the arms industry gets involved in the discussion and says, “Yeah, they’re pretty bad. We maybe need another Cold War.” And then you have Democrats out there that buy into it like lemmings, “Russia’s bad. Russia’s bad. They hacked our election.” That’s not where the weapons industry really cared. They didn’t care about hacking elections. The weapons industry wanted to sell more weapons. And if you have a good old-fashioned Cold War, baby, you see a lot of weapons. What’s your take on this increase in international killing by the weapons industry?

Farron Cousins: 17 years straight now, we’ve been bombing all around the world, ever since the first year of the Bush administration, basically, bombing everywhere. This is not a Democrat thing, this is not a Republican thing. This is the way the United States is-type thing. We are spending, what is this, just in 2017, $750 billion to the Pentagon, which then handed $350 billion of that-

Mike Papantonio: To the weapons industry.

Farron Cousins: To the weapons industry. You’re talking GE, Raytheon, Boeing, all the usual suspect, because they need wars. And yeah, they would love a way in Russia, which would be one of the dumbest things we could ever, ever do.

Mike Papantonio: China or Russia, the would love a war in either place.

Farron Cousins: Right. But, since they can’t get that, thank God, they’re more than happy to just keep bombing the Middle East, because as a whole, the US doesn’t necessarily care about that. They can’t point to where Yemen is on a map. They don’t know, as Gary Johnson, the Libertarian, they don’t know what Aleppo is. So, sure.

Farron Cousins: If we just bomb somebody or we’re launching these airstrikes, it obviously means it’s because there was a bad guy over there and we probably got him. That’s all they know. They don’t understand war is an industry. War, fighting, death, those are profits for these companies that, as you point out, you do see-

Mike Papantonio: War is one of the biggest industries in the country, in America. It has been for a long time.

Mike Papantonio: So, if you figure you give $750 billion to the Pentagon … by the way, during a time when the Pentagon said, “I don’t think we really need that much money.” Do you remember that? “We don’t really need that much money. Keep your money.” Well, the weapons industry came in and said, “No, give us $350 billion, and by golly, a good old-fashioned Cold War with Russia would be just perfect.”

Now, what bothered me … and I liked it, because you know I haven’t really gone into a lot of detail on this discussion, but what is your reaction to people who should know better? You’re a millennial, okay. Millennials are pretty well-informed, I think. They find all the information on social media. They could see it. They could see it, this whole Russia thing, we’ve got Russia’s bad, we gotta start a war with Russia, we gotta start a potential war with China because, well, gee, the trade deficit. But who is it that’s behind that? The money always leads to the weapons industry. Why is it that the rank and file Democrat got sucked into this thing that was started really as a hoax. Did the Russians hack? Of course they did. I don’t have any question that they did. Do we go to start a new Cold War because of that? Because Hillary lost? No. But you have them in droves out there that really don’t even … it’s like they don’t understand how they have drank this Kool-Aid. What is your take on it? I wanna know whether I’m too far off on that analysis. Because it makes me crazy that these people who think they’re well-informed, it’s right before their eyes and they don’t even see what happened.

Farron Cousins: There’s a lot of progressives out there that understand that Donald Trump may or may not have been in contact with Russia. At this point, it actually is looking like they were in contact with the Seychelles and the United Arab Emirates. But no, don’t talk about that. That’s the Russia thing. And there is evidence that they were able to get into the voting systems in the US, but as of right now, we still don’t have firm evidence that anything was changed.

Mike Papantonio: So who benefits?

Farron Cousins: The defense industry. But here’s the other thing too, though, when they talk about what about all those ads they bought on Facebook and the memes they posted? Look, if that swung an election, then we deserved it to swing an election because we’re idiots.

Farron Cousins: Right. So look, I think on that front, that is absolutely stupid. If you think you’re going to prove collusion with Russia, even if it happened, and you have all the documents saying it happened, that’s still virtually impossible to even prove it happened.

Mike Papantonio: But that’s the heart of this story, don’t you see?

Mike Papantonio: Because the weapons industry took off on that stupidity, and now they literally have been trying to start a war with Russia so they could sell more weapons. And you know, these cats out there that think they’re so informed and they’re so insightful and they understand what’s happening, it’s almost like they’ve never read a Howard Zinn book. They’ve never read Chalmers Johnson about empire building and the arms industry. To me, it’s one of the biggest disappointments that I’ve had as I’ve watched this politically since it started unfolding. And we still get emails from these numb-nuts.

Farron Cousins: Well, look, $350 billion to private defense contractors last year, we could have given a hell of a lot of people health insurance.