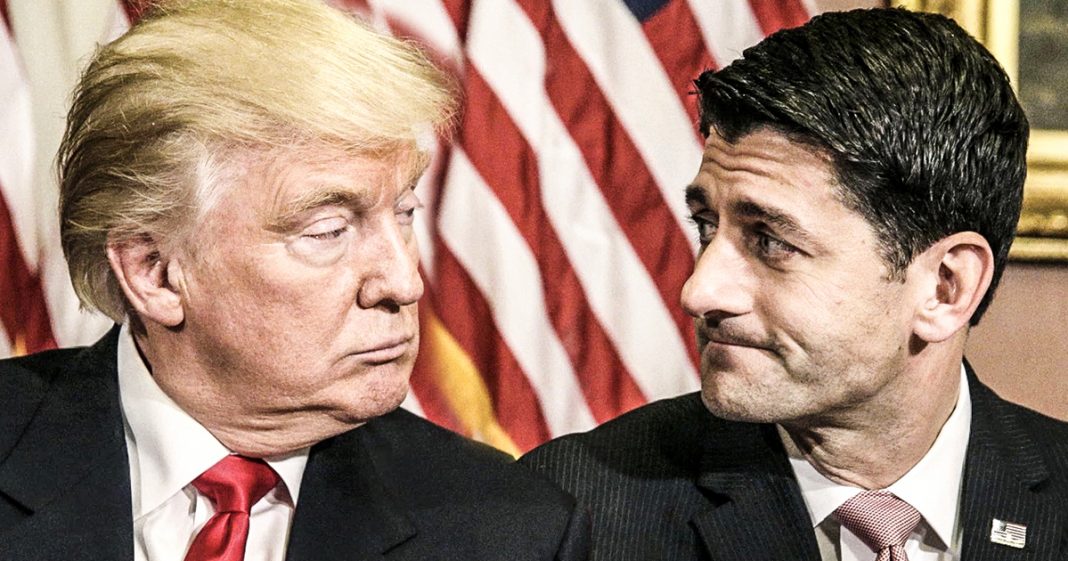 According to economists, our economy is on track for another recession in about 18 months. The reason? The massive tax cuts, soaring deficits, and trade wars enacted by the Republicans in charge of this country. They are the ones to blame for what’s happening with our incredibly fragile economy that they keep promising us is in better shape than ever. Things are about to come crashing down, and when it happens, you can thank Donald Trump and Paul Ryan. Ring of Fire’s Farron Cousins discusses this.

It’s always fun to hear Donald Trump talk about, or even Tweet about, the fact that the United States economy is doing better than ever. And sure, we’re actually in the middle of one of the longest recovery periods that we’ve ever had for the US economy, at least in modern history. And 99% of that is due to the policies of Barack Obama. He is the one who put us on this track and so far we’re still on it at the moment. But over half of economists recently surveyed in a major economic poll said that everything is about to come crashing down. Within the next 18 months we can certainly expect a recession, according to the majority of economists in the United States. And an even greater majority of those economists, they don’t say that it’s going to happen by the end of next year, they say it’ll happen probably by the middle of 2020.

So at best, what are we looking at here? 24 months before a massive recession, even though things look like they’re going phenomenal right now? So the big question is, what’s going to happen? Why are things suddenly going to go down? Well as a recent USA Today article pointed out, every time the economy is in a recovery period and you get towards the end of that recovery where things look like they’re sustainable, that’s when it’s actually the most susceptible to outside forces destroying it. It happened, as they point out, in 1990-1991 with rising oil prices. It happened in 2001 with the dot.com bubble bursting and it happened in 2007 with the housing bubble bursting. And they’re also all predicting another bubble bursting in the next 12 months at least.

Here are the bubbles that they are predicting are about to burst. First and foremost, the Fed is about to raise interest rates. They do that in order to help kind of slow down recovery. I know it seems counter-productive, but that’s what they do. It keeps confidence high, it slows things down to keep the progression going instead of going too fast and crashing. However, it usually has the effect of helping to send us into a recession. Second thing they point at are the trade wars that Donald Trump has started. We’ve already lost more than a thousand jobs in the last month and a half because of his trade wars, and that number is going to continue climbing. Companies are shipping production overseas, where other businesses are threatening to have to shut down because they can’t afford to operate anymore. And with countries like Canada and China and the EU imposing new sanctions, or tariffs, excuse me, on us within the last week, things are about to get much, much worse.

We also have rising energy prices today, just like we did in 1990-91 and there’s no real explanation for it. Oil production is at an all time high, and yet prices continue to go up thereby not only blowing up the economy, but also blowing up a pretty decent Republican talking point that they’ve been hammering on us for years. The bottom line is this: economists agree this economy is about to come crashing down. Why? Because we built our economy on unsustainable things. They also point to the fact that the deficit is rising at an exponential rate and that Republican tax cuts have done nothing to help average consumers. And now they want to give them another tax cut for the corporations while giving nothing to consumers. Things are going to come crashing down, there is no doubt about that among economists. And when they do, I want everybody to remember one thing. It’s because, 100%, of the policies put in place by Donald Trump and Paul Ryan.

The only benefit that Paul Ryan has is that he won’t be in office anymore when everything comes crashing down. But that doesn’t mean that he doesn’t deserve your thanks for destroying the US economy by rigging it so that it only works for the wealthy and continues to screw over consumers. Whether he’s in office or not by the time this recession hits, Paul Ryan and Donald Trump are the ones to blame for what’s about to happen.