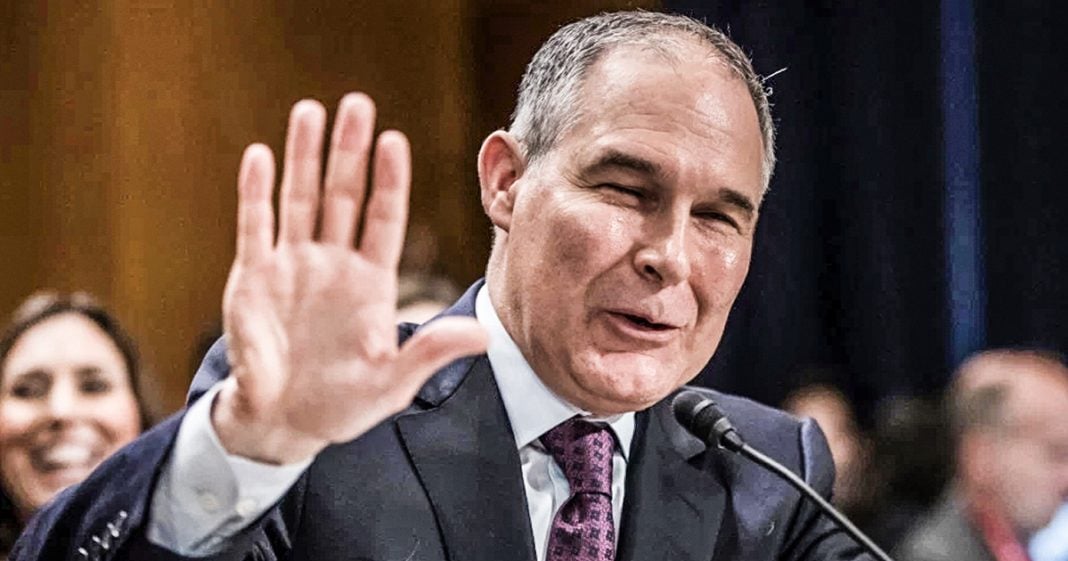 EPA Administrator Scott Pruitt has committed multiple felonies according to a whistleblower who worked for Pruitt at the EPA. Pruitt allegedly kept a secret calendar in order to hide the fact that he was meeting with officials from industries he is supposed to regulate, as well as to hide meetings with lobbyists from these industries. Pruitt’s activities have gone from comical to criminal, and the man should be prosecuted immediately. Ring of Fire’s Farron Cousins discusses this.

According to a new report, a whistleblower, a former employee with the environmental protection agency who worked for Scott Pruitt, Mr. Pruitt has routinely been committing felonies while in his role as administrator of the EPA. Specifically, the felonies that Scott Pruitt is committing are violations of the Federal Records Act, and he’s doing that by actually having his staffers create a second dummy calendar for the public and then a private calendar that actually has the real meetings that he is going to attend, and those meetings include gatherings with lobbyists from fossil fuel companies, they include meeting with executives from fossil fuel and chemical companies, and meeting with the lawyers for these industries and the lobbyists. These are meetings that Scott Pruitt, according to the whistleblower here, kept off of the official books, which Scott Pruitt’s schedule, his calendar of events, is posted on the EPA website, but he didn’t post these. He hid them on a private calendar, directed his staff to scrub anything that could be deemed controversial from that public calendar, and yet still went to the meetings. He didn’t want any bad publicity from this.

Well, guess what? As Ted Lieu tweeted out the day that this story broke, concealing or falsifying federal records is a felony. Scott Pruitt’s behavior has gone from the comically incompetent in terms of looking for a used Trump mattress, and hand lotion, and gloves, and all kinds of crap, to dangerously criminal, because this is criminal behavior. CNN did some digging. They found that Scott Pruitt’s travel records actually corroborate the whistleblower’s story. While they can’t pinpoint that he actually was at a specific meeting with some of the people, they can verify that he was in the same place at the same time and it did not match what was on his public calendar.

They did also find, and I have to mention this because it’s humorous, they did find that a couple of the meetings that were scrubbed from the official calendar were pretty innocuous. For example, one meeting he attended, which was not on his public calendar but was on his private one, was a lunch with Kellyanne Conway. I have to fully admit here, I don’t blame Scott Pruitt for that. Now, if I had to have a meal with Kellyanne Conway, I sure as hell would not want anyone in the world to know about it. So, I’m going to give you a pass on that because I’m sure that was a horrible, horrifying experience for you there, Mr. Pruitt. But that aside, you are obviously a criminal and you need to be put in jail.

That’s the point we’re at, folks. Scott Pruitt does not need to be serving as the protector of the environment for the United States. He needs to be in a jail cell surrounded by fellow criminals because that is what he is. He is breaking the law left and right, and nobody is doing a damn thing about it. Nobody. Where are the Republicans on this? Where are the drain the swamp dumb asses in this country? Donald Trump picked the worst person that I have ever seen in my life serving in federal government. Scott Pruitt takes it all. Yet, those idiots out there are still saying, “He’s draining the swamp. He’s draining the swamp.” If you think Trump is draining the swamp, then you’re an absolute idiot who doesn’t know how to read or write because you would obviously know what Scott Pruitt is doing. That’s the only explanation left.

Scott Pruitt needs to be prosecuted for every single one of his federal violations and there are many, not just this one. This man has racked up so many crimes that it is undoubtedly life in prison if he would be convicted on all of them. That’s what we’re looking at here, folks. I want people to understand that. That is the level of criminal incompetence and criminal activity that is taking place actively inside of the Trump administration. Trump doesn’t care, the Republicans in congress don’t care, and Republican supporters of the president don’t seem to care. If they don’t care about this criminal activity, then what other horrifying acts by this administration are they willing to overlook? That’s a question that I hope we never have to answer.