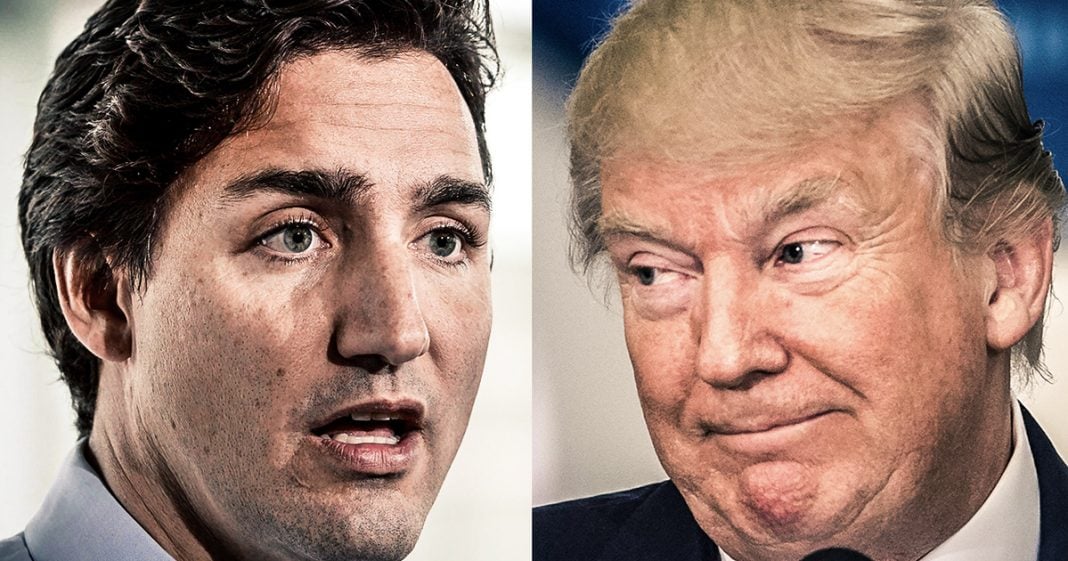 Canada is backing down from Donald Trump’s trade war, and they’ve decided to escalate the situation by imposing massive tariffs on a new array of goods from the United States. Trump is out of his element here – he doesn’t know what he’s doing, he doesn’t even have an end goal, he just knows that he wants to try to bully the rest of the world and it is backfiring on us worse and worse every day. Ring of Fire’s Farron Cousins discusses this.

Canada has announced that they’re going to slap an additional $12.5 billion worth of tariffs on goods coming from the United States into Canada. Now, that was in response to Donald Trump recently slapping more tariffs on Canada thinking that he was going to pressure them and muscle them out of these trade wars, and get them to cave in everything. The tariffs were also not just on Canada, they were also on goods in the European Union.

In addition to all the tariffs that he’s put on China and Canada, just like everybody else has done, decided to issue a massive middle finger to Donald Trump that said, “We’re not going to be bullied. Instead, we’re going to tax all of the crap coming out of your country.” Here are some of the goods that Canada has slapped the tariffs on. In addition to aluminum and steel, they’ve also got whiskey, maple syrup, orange juice, lawn mowers, and ketchup.

Now, here’s the thing. Trump doesn’t know what he’s doing. He thinks that these little trade wars are the same as trying to muscle another business into selling you their company, you know? You squeeze them out of a market here, squeeze them out of one there, increase the prices that they have to pay for things to the point where it’s not profitable for them to operate, so they sell to you. That’s how the business world works, but here in the real world with real people and real world leaders who actually have just as much power as you, Mr. Trump, you can’t do that.

We are going to see more of that, and again, I cannot say this enough, this has been going on for less than a month and a half, and we’ve already seen these very dire consequences of it. Can you imagine how bad things are going to be by the time the mid-terms actually roll around, how many newly unemployed people there are going to be? How many jobs this country will have lost? How much economic activity will have been lost? How many more dips in the stock market we’re going to have? It’s all 100% because of Donald Trump.

Congress tried to step in, the democrats tried to step in and pass legislation that would prevent Donald Trump from imposing these tariffs. Republicans blocked it, didn’t even allow it to come to a vote. So yeah, Donald Trump owns this. Democrats tried to fix this. That is the biggest most important piece of information that every person in this country needs to take with them when they head to the polls this coming November.