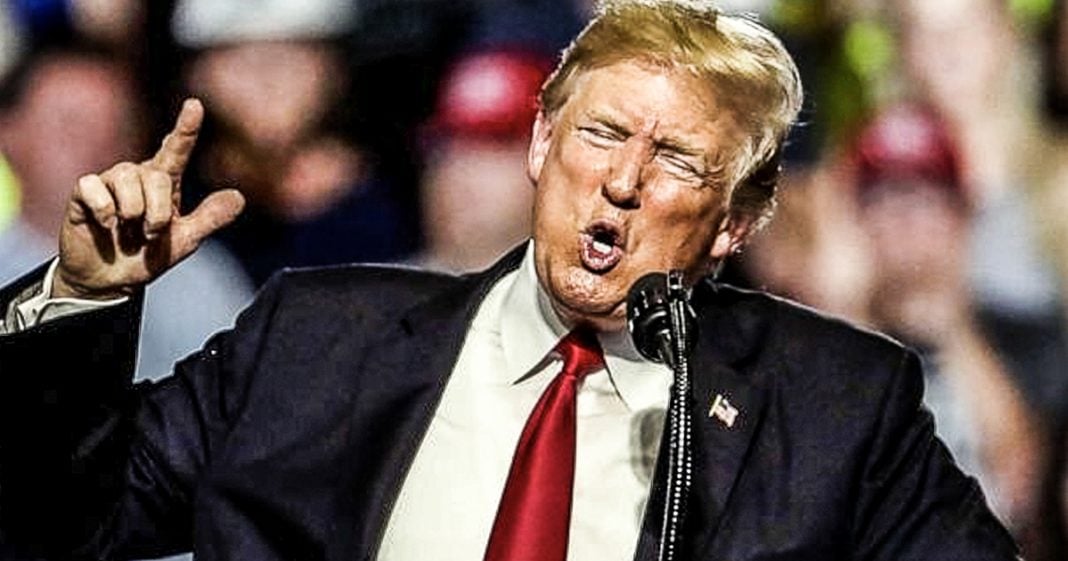 Donald Trump headed to Montana this week where he managed to deliver his most insane and insulting speech to date. He not only attacked Elizabeth Warren using his usual slur, but he also claimed that Maxine Waters was mentally handicapped because she had an IQ in the 60’s. He also mocked the MeToo movement and Jon Tester. But, as Ring of Fire’s Farron Cousins explains, that wasn’t even the worst part of his disgusting rally.

Donald Trump went to Montana on Thursday evening to hold another Klan rally, excuse me, campaign rally, and during this little rally, he managed to do several different things to offend quite a few people here in this country. First and foremost, he said that the Press are really bad people. Just days after we had a newsroom shooting, he decided to attack the Press as really bad people.

More importantly, he also attacked an African-American Congresswoman, Maxine Waters, by telling the crowd that she had an IQ in the low 60s, which would, by definition, make her mentally handicapped. Now, here’s the thing. Donald Trump has never given Maxine Waters an IQ test, and if she has ever taken one, he has never seen it. He’s literally just making this crap up, and those little cultists, because that’s what they are at this point … They’re not political supporters. They are members of the Trump cult and that audience, they went wild.

Trump then moved on, from attacking an African-American woman to attacking Elizabeth Warren, another woman, because it’s easy for Trump to attack women, because he thinks they’re weaker than him, when, in fact, either of those women has more strength inside of them than Trump could ever imagine. Nonetheless, he pokes some fun at Elizabeth Warren by repeatedly calling her Pocahontas, and then somehow managed to go from a racist joke to a sexual assault joke, then he mentioned getting one of those DNA test kits and being gentle with her with it, because we’re in the middle of the Me Too Movement. I don’t know what Donald Trump thinks you have to swab with those little DNA tests, but clearly he was making a reference to some kind of sexual thing with Elizabeth Warren there, after, of course, insulting her heritage.

Again, the crowd loved it, and that’s the scariest part. It’s bad enough that we have such a moron like Donald Trump as the President of the United States out there attacking people like Maxine Waters, making stuff up about her; same thing with Elizabeth Warren, but the crowd … The crowd is the scary part, folks, because those are the psychos that are out there every day. You run into them on the street, and you don’t even know it. You go and you buy stuff from their businesses, and you don’t even know it, but these people hold deeply racist and sexist views about this country and the way the world works. These are disgusting human beings. They are just like Donald Trump, and most of them, if not all of them, are too stupid to realize that they have been indoctrinated into a cult, not a political movement.