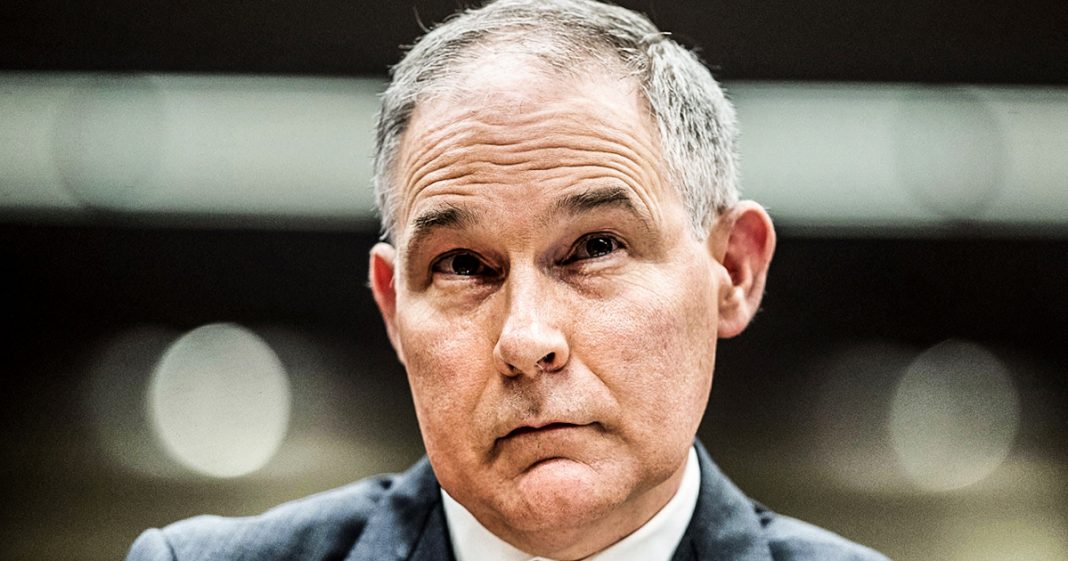 EPA administrator Scott Pruitt has finally resigned after being the subject of nearly two dozen different investigations and ethics scandals. And in his resignation letter, he lavished praise on Donald Trump saying that his election was “God’s providence” and that God had chosen Pruitt to work with Trump. We knew he was corrupt, but now we also know that Pruitt may actually be delusional, as Ring of Fire’s Farron Cousins points out.

Scott Pruitt has finally resigned as the administrator of the EPA after hitting the nearly two dozen scandal mark. As it stood yesterday, July 5th, when he actually resigned, he was actually under 19 different investigations, 19 different investigations for his horrible behavior as the EPA administrator. He’s basically averaging one new investigation per month since he came into office, but here’s the thing. In his little resignation letter that he sent out, it talked less about the scandals and what a shitty person he was, and instead, he spent most of his time just praising Donald Trump. At one point, he wrote the following line in there. This is pretty sick. “I believe you are serving as president today because of God’s providence. I believe that same providence brought me into your service. I praise I have served you, that I have blessed you and enabled you to effectively lead the American people.”

Not only was Scott Pruitt corrupt as hell, but he’s also clearly crazy. If you think that Donald Trump being elected was God’s providence and that same providence from God brought you into Trump’s service, then yeah, there’s something not quite right happening inside of your brain. Trump is president today because we have a backwards political system that allows the Electoral College to ignore the will of the popular vote and basically do whatever the hell they please. That’s why Donald Trump is president. Let’s not forget all of the outside interference from groups including the FBI, outside sources from the Seychelles, the UAE, Russia, whoever the hell it is, but yeah. That wasn’t God’s providence. That was a corrupt-as-hell businessman who wanted to try his hand at being a corrupt-as-hell politician, but nonetheless, Scott Pruitt is out. Today is his last day, and he’s being replaced by a man who actually used to be a former coal lobbyist.

We’re not going to see any policy changes happening at the EPA, and that’s what’s really important here. We’re probably not going to see the same level of scandals. I assure you there’s still going to be some scandals coming out about this Wheeler guy, because he is really, really horrid, but we’re going to see the same “Destroy the environment. To hell with American citizens” attitude that Scott Pruitt brought to the EPA with Wheeler. Wheeler will continue on this legacy, and it’s a legacy that the press completely ignored, because they were too busy talking about the latest scandals of Scott Pruitt rather than the destruction that he was causing to this country. Hopefully, now that there is still a spotlight on the EPA, the media will focus on the horrible policies coming out of the administration, and they won’t be sidetracked by countless scandals.