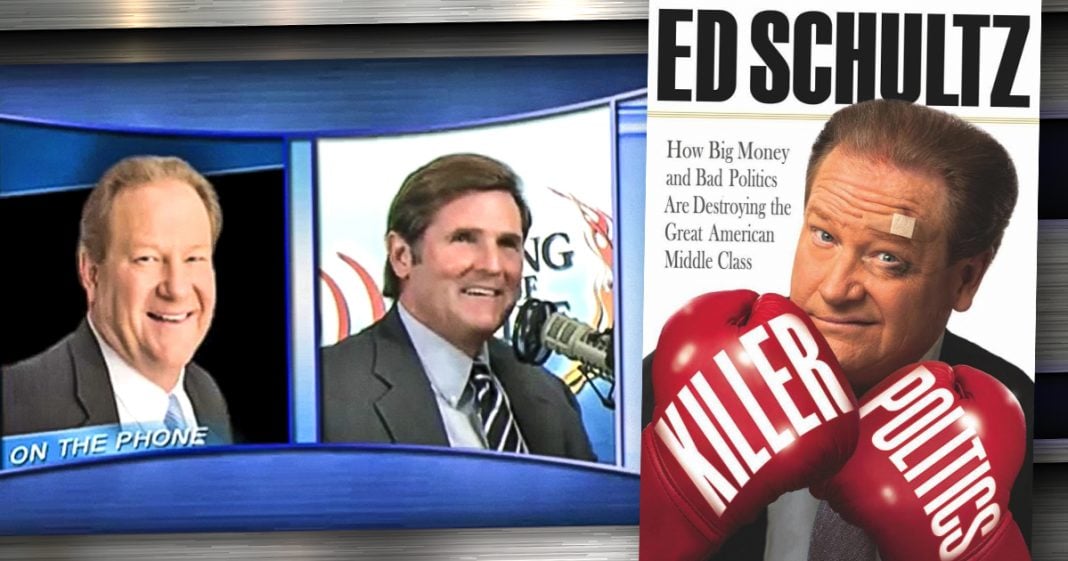 Just a few years ago, it would have been almost impossible to turn on your radio and hear the voice of a progressive talk show host. The conventional wisdom was that only conservatives could survive on the air, and numerous progressive hosts had tried and failed. But when Ed Schultz came on the air, he did something that no other progressive host had done – he got angry. His audience saw that it was ok to be passionate and show emotion, and he became a success because he wasn’t afraid to tell it like it is. Mike Papantonio talks with Ed Schultz, host of MSNBC’s The Ed Show, about uphill battle he faced, as well as some of the current problems with our political system.

Mike Papantonio: Ed, you dedicate your book to the great middle class in America. It’s in that dedication you talk about your love for those people and your respect for those people, and how you admire them. Really, when I look at your history, that’s where you grew up, isn’t it? You started with America’s middle class.

Ed Schultz: Really did. I’m the last of five. My mom was a high school English teacher. My dad was an aeronautical engineer that had a civil engineering job with the government at Norfolk, Virginia, at the air station there. We were just a middle class family in a two-story home. My mom and dad gave everything to the kids their whole life. I’m trying to do what they taught me to do and live my life with some honor and integrity for the next generation, and I thought I’d write about it.

Mike Papantonio: You’re doing all that. As a matter of fact, when I watch you, when I listen to you, when I read your book, what I see, it’s real anger when corporations or government mess with mom and pop part of that middle class. Do you think that anger gives you an edge in the media business? I do. I was just wondering what you thought, whether that anger fits in.

Ed Schultz: Well, if I had come from a different background maybe some of these stories wouldn’t be striking my passion the way they are. I see the hardship on American families. I see the hardship on the American worker, and I see who’s inflicting the pain. It’s us. It’s a very small portion of people who are benefiting from the concentration of wealth, while the rest of us in the middle class are getting squeezed. This is not where we want to take the country.

The corporate greed, and the corporate control, and the corporate influence on our elections, are butchering this country. We can’t have, and I write about this, the filthy rich, the rich, and the poor, the dirt poor, if we don’t have a vibrant middle class that has a chance when it comes to retirement, when it comes to education, when it comes to healthcare, when it comes to owning a home, and owning a car, and being able to provide at just a modest level, we are taking that away from Americans. Sometimes, I think that we don’t even realize we’re doing it. We’ve got to do something, Mike. This country has got to stand up. It’s beyond all political boundaries. I lay a lot of blame on the footsteps of the Republicans, but the Democrats have got their act together too.

Mike Papantonio: Yeah, I want to talk about that in a minute. Let me ask you something. Everybody that describes you, describes you as the pioneer of progressive talk. It’s absolutely true. I remember. I watched you. You launched progressive talk radio, an environment where everybody in the business said that that type of talk radio was impossible. You proved them wrong in a huge way. What did you recognize about what you were going to do? What did you understand that was so different about what you were going to do that Mary Como, Alan Dershowitz, some of these other people that were in the business and just didn’t make it? What did you see different?

Ed Schultz: Well, I think that I’m not a mayor. I’m not a congressional member. I’m not scientist. I’m a radio guy. My roots are in this business from way back in 1978, when I got my first job doing morning sports on KQWB radio in Moorhead, Minnesota. Heck, I don’t think it was all those hockey games I was at in the middle of night chasing the sound bites around and everything else. It’s a skillset. Then, I match it up with what Americans were saying and what they were believing. I just didn’t buy and believe that there wasn’t room for a different political take on the radio dial.

Mike Papantonio: Well, that’s what they see. I think, when I look at it, I see almost this bare knuckle brawn where there’s no Birkenstocks, no poetic pauses. It’s a connection, man. When you’re on that tube and you’re looking in that camera, you are connecting. You came out with a message. The message resonates in everything you say. You’ve tapped into this message that greed’s killing our country, that corrupt system is killing Democracy, whatever it is, it seems to resonate. You feel that in your audience, don’t you?

Mike Papantonio: Within two years, you were, of course, putting in some of your own money, but you were up to, what, 70 stations in about a year.

Ed Schultz: Yeah, we did about 70 the first year. We got up to about 110. I think we’re around 90 right now. We’ve hit a glass ceiling. There’s conservative ownership, and I understand that. It’s a free market at work. If I owned 500 radio stations, Rush Limbaugh wouldn’t be on any of them.

Mike Papantonio: You watched the Sagebrush Rebellion develop, just like did. The Coors family, Richard Mellon Scaife, the Kochs, it was their plan to minimize their tax burden, they want to minimize regulatory participation by government. They wanted the middle class, basically, to react to cultural issues that caused them to vote against their own interest. It was a criminal class. As you talk in your book, there’s no other way to describe it. In my mind, it was a criminal class. I’m wondering, in your mind, do you think that it’s run its course, or is there still something the matter with Kansas out there, where this cultural war is still a big threat?

Ed Schultz: I think this cultural war is going to be going on for a long time. I think we’ve got to brace the next generation for what’s on the horizon, that I think it’s going to take a long time, Mike, to turn around this corporate culture of control. It’s going to take a constant fight and a constant engagement of the people who care about democracy to straighten this thing out. I believe that workers’ rights, production of American goods is really where we’ve got to go, if we’re going to bring it back. I believe that corporations can make more money if they rely on American workers and American infrastructure. I think that we’ve gone through the most selfish generation in the history of the country. We’ve had more people take instead of give back. Somehow, we got to turn that thinking around.

Mike Papantonio: In your book, you talk about the combination. It’s the formula. I call it the black formula that you put in there so well. By the way, honestly, it’s a great book, Ed.

Ed Schultz: Thank you. I appreciate it.

Mike Papantonio: It’s a powerful book. Everybody who has any doubt about what’s going on’ll read this. You talk about there’s a combination of somewhat propaganda, jingoism, rewriting history, and an endless amount of money that’s pretty powerful combination. I’m wondering, can we fight all that? Are you optimistic that we can do anything, that we can even move and transform mainstream media by what we do every day?

Ed Schultz: I do. I really believe that. I believe that you’ve got the next generation coming up that’s living on the iPad, living on the iPhone, living on portability of information. The information highway is there. We just, as advocates, have to make sure that people maintain their curiosity, because there’s plenty of tools out there for them to be empowered, to be informed, and avenues to take action. I really do believe that we can get this country back, and I really believe that the progressive movement is the only movement that can get this country back on track.