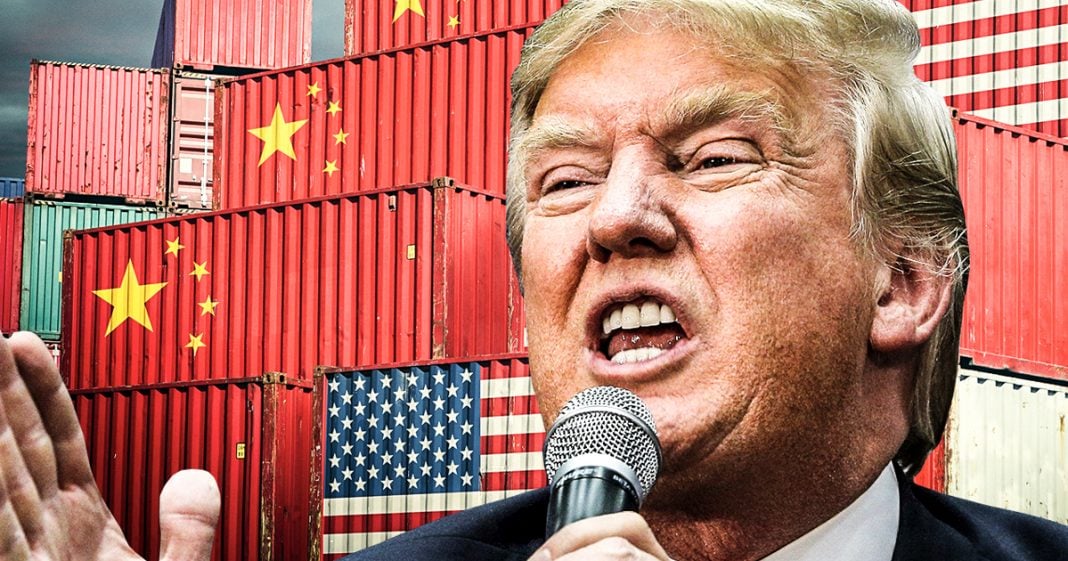 Donald Trump claims that he’s the most patriotic man you could ever imagine, but in reality, he’s all about money. And the fact that his Trump 2020 campaign gear is being made in China and NOT in the United States proves that point. He doesn’t care about American workers or American jobs – he just cares about saving a few dollars whenever he can. Ring of Fire’s Farron Cousins discusses this.

Donald Trump likes to pretend that he is the most patriotic person that you will ever meet in your life. He’s gone as far as actually physically hugging the American flag on stage after giving a speech. He’s actually done that several times. Now, aside from the fact that he doesn’t know the words to the National Anthem or God Bless America, America the Beautiful, anything, really, he likes to say that he cares about American workers, he cares about the American economy, and after all, he just wants to make America great again, which is a phenomenal slogan that he has plastered on hats and shirts and even on American flags.

But here’s the thing. All of those goods that sport that MAGA tagline, they’re not being made here in the United States, and all of the ones for the upcoming Trump 2020 campaign are also not being made in the United States. According to a recent report, Trump’s 2020 reelection gear has been traced back to a factory in China, meaning that even in 2020, after convincing us to buy American, use American labor, America, America, America, Trump is still having his campaign gear manufactured, designed, fabricated in China and then shipped over here to the United States for people with very low IQs to go scoop up at the low, low price of probably $50 per hat.

This is ridiculous at this point, folks. These people out there who wear the MAGA hats, they wear the MAGA shirts, they got the MAGA bumper stickers covered in American flags, as well, all of that crap is being made in China. This man that you think is just the greatest American that America has ever America’d, is getting all his crap from China. And it’s not just the campaign gear. It’s everything that bears this man’s name. It’s all being manufactured overseas. You’re all being duped, and none of you even take the time to look at the little tag that comes on it to see where it’s being manufactured.

Trump doesn’t care about American laborers. Trump doesn’t care about American workers. Trump doesn’t care about the American economy as long as he’s making money. He continues to outsource labor because it’s cheaper for him. He saves money. He doesn’t have to spend as much, even though spending a few extra dollars here in the United States would generate more tax revenue, it would help our schools, our police officers that Donald Trump claims to love, our fire departments. We could invest in an infrastructure, which Trump says desperately needs to happen. And yet he, just like so many other in the 1%, aren’t willing to pay for any of that. They would rather ship all their production overseas, make a few extra dollars, save money, cut corners, not deal with regulations that keep workers from dying on the job, and then come back to the United States with it and sell it to people who don’t know any better.

And that is exactly what the MAGA crowd is, a bunch of people who are being duped by a conman who has turned them into a cult, because they didn’t see it coming. And I guarantee you, as the months go on, we’re going to see more and more people sporting these MAGA hats, MAGA shirts, American flags, and I hope that every one of them takes a few seconds out of their life to look at the tag and realize that all of this crap was made in China.