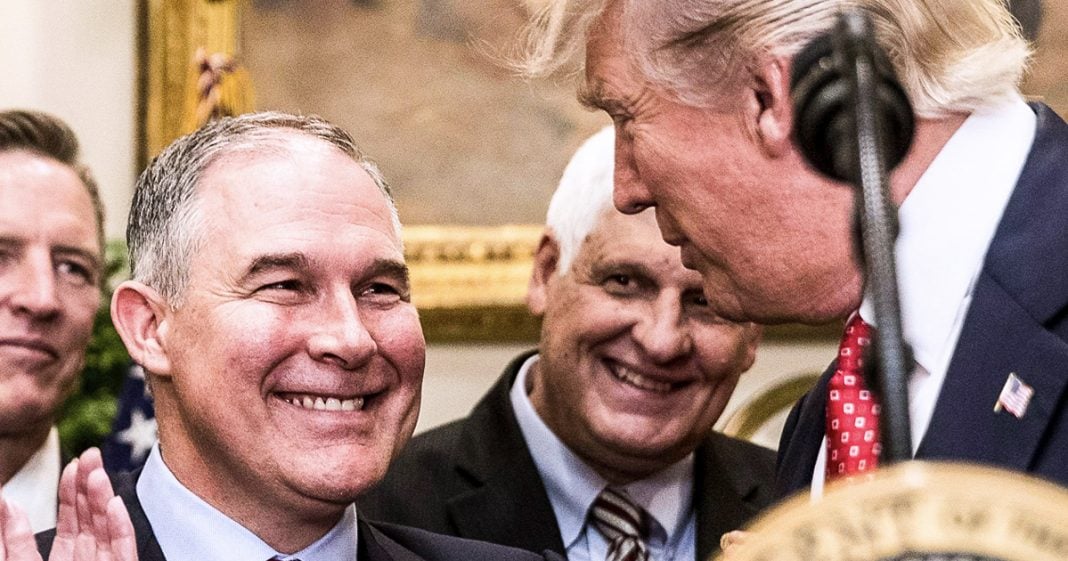 Scott Pruitt, Donald Trump’s most corrupt cabinet member, has actively been trying to sabotage the careers of former staffers who he believes betrayed him while they were working for him. This is a new low, even for the Trump administration, and the lives of countless people are being destroyed by a petty, incompetent, and wholly corrupt official. Ring of Fire’s Farron Cousins discusses this.

EPA Director Scott Pruitt has been, let’s say, having a very rough time ever since he took the job as the head of Donald Trump’s EPA, but Donald Trump continues to stand by him. He told us just a week and a half ago that Scott Pruitt was doing an amazing job, reminiscent of George W. Bush saying Michael Brown with FEMA was doing a heck of a job after Hurricane Katrina, because that’s pretty much what Scott Pruitt’s doing. He’s turned the entire EPA into a massive disaster, and the only reason we know about a lot of this is because former staffers have come forward and told us this. Well now, Scott Pruitt is seeking his revenge, and in true Donald Trump fashion, he is trying to ruin the lives of all of these former staffers who have come forward to expose his massive corruption.

According to recent reports, Scott Pruitt is actively trying to destroy the future careers of the former staffers who outed some of his more corrupt behavior. Here’s how he’s doing it. Not only is he not giving them good recommendations when they apply to new jobs, but he is instructing the rest of his staff to do the same. He is also actively, personally speaking to right-wing think tanks, trade groups, and other people, lobby groups in Washington D.C., badmouthing these former staffers, calling them liars, saying they’re not trustworthy, and, more importantly, telling these organizations not to hire them.

Scott Pruitt is so mad that his corruption was exposed for the world to see that he is trying to ruin the lives of the people who came forward. Honestly, this is a big problem we have in this country with whistleblowers. Anybody willing to come forward and say that a government official or a corrupt CEO was breaking the law, doing this, doing that, they normally do face some kind of retaliation, which typically includes trying to ruin that person’s life and career. That is exactly what Scott Pruitt is doing here, and we shouldn’t have expected anything less from him. After all, he works for Donald Trump. That is his immediate supervisor, and Trump is the same kind of guy who likes to get on Twitter, ruin people’s lives, attack them personally, physically, or I should say, on their physical appearance, on their work ethic, on their IQ, and Scott Pruitt’s just taking this Donald Trump blueprint and applying it to his own staffers who he feels have betrayed him.

The only betrayal that’s gone on here is Scott Pruitt betraying the ideals, and goals, and values of the Environmental Protection Agency. Instead of working on giving us cleaner air, or cleaner water, or cleaner soil, Scott Pruitt is actually trying to make all of those things dirtier, trying to make all Americans just a little bit sicker, the air we breathe just a little bit more polluted, while at the same time sending his staffers out as personal errand boys and girls to buy him used mattresses, to buy him hand lotion, to buy him all kinds of other things that I hope are not related to one another, like the lotion and the mattress, but Scott Pruitt has abused every possible facet of his office.

He should be removed, but he won’t, because the Koch brothers love what he’s doing, and so he’s going to continue retaliating against these people, destroying their lives, and making sure that they are the ones who don’t have a future in Washington D.C. or in American politics when in reality, Pruitt’s the one that should be shunned by every single organization in Washington D.C., kicked out of town, never to be heard from again.