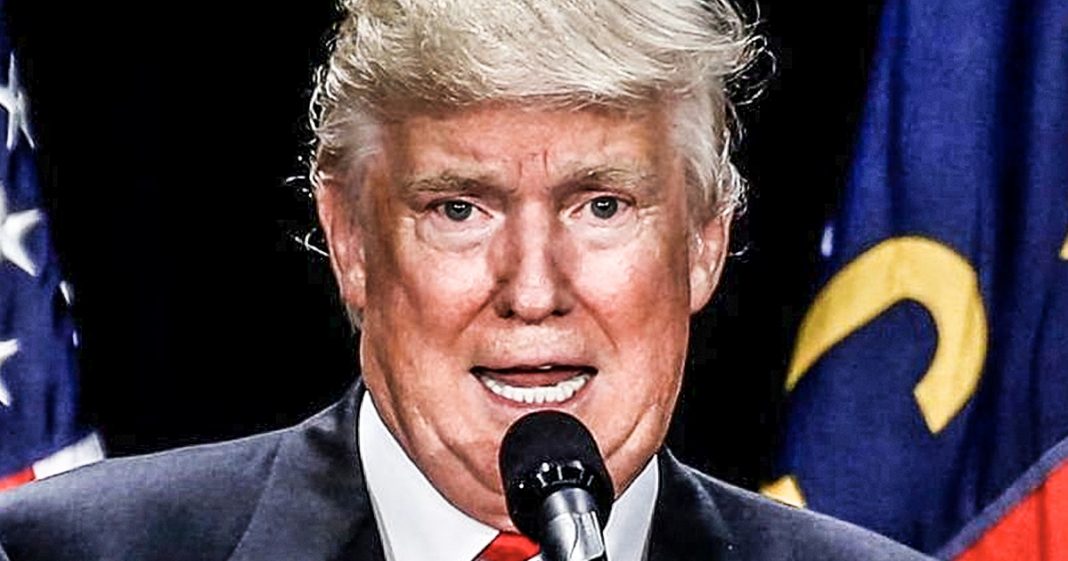 Donald Trump talks a big game about patriotism and loving this country, but his business practices show the exact opposite. The majority of his goods are all made overseas with cheap labor and few regulations, scamming countless Americans out of jobs and avoiding US payroll taxes to help build our country. Trump is a complete fraud, and its time we start hammering these points home. Ring of Fire’s Farron Cousins discusses this.

Donald Trump might actually be one of the most un-American presidents that we have ever had.

Now, the reason that I say that is because we look at Donald Trump’s patriotism. We’ve seen him hugging the American flag onstage after a speech, but when you drill past all of that showy patriotism, we really look at his policies; but more importantly, his business practices. We can see that this man has no more respect for this country than he has for women or immigrants. Because Donald Trump is still having his companies, the corporations that bear his name, that put out products with his name slapped all over it; the production of those goods is still taking place in other countries.

See, right now, Donald Trump is actually making the rounds, bitching about Harley Davidson moving their operation or at least part of their operation overseas because of his tariffs. They want to remain competitive, and the only way for them to do that at this point because of his policies is to ship American jobs overseas. They didn’t want to do it, but they’re being forced to because Donald Trump’s trade wars are strangling them out of competition. But Trump himself is a different case. He didn’t move production overseas. He’s not using overseas labor because of some bad trade policy. He’s doing it because he is a cheap bastard that doesn’t care about what happens on American soil.

Right now, there are 12 different countries where Donald Trump’s goods are made, and not one of them happens to be the United States of America. Now, I know Trump does have businesses here, he does business here, he hires people here in the United States. When it comes to actually making the crap that bears his name, all of that is taking place overseas. Here is just a few of the things that bear Trump’s name that are being made in overseas countries: Shirts, suits, sports coats, eyeglasses, home-goods, furniture, lighting fixture, mirrors, hotel amenities, shampoo, towels, laundry bags. All of those being made overseas in countries like China, Germany, Bangladesh, Indonesia, Vietnam, South Korea, and many more.

Do those sound like the actions of a man that actually gives a damn what’s happening here in the United States? Do they sound like the actions of a true flag-hugging patriot? Do they sound like what a guy would do if he cared about American workers and the American economy? No. They don’t, and there is nothing you can say to try to make it sound like this guy actually cares. His supporters were hoodwinked from day one! I mean, this isn’t new information, these are things that we knew back when he started running for president! Because in one of the very first GOP primary debates, he was called on that, for shipping all of his production overseas. Do you know what he said? He said, “We’re allowed to do it. So I will take advantage of it.” Not, “We’re allowed to do it, so I’ll do it. We’re allowed to do it, so I’ll take advantage of it.”

So he admits he’s taking advantage of the American system here. He’s taking advantage of the American people, but publicly, this guy wants you to think that he is some kind of super patriot that’s here to save the US economy, and that he actually cares about struggling American workers. The only thing this man cares about is his own bank account. If you think anything different, then you have absolutely fallen for the Donald Trump long-con.