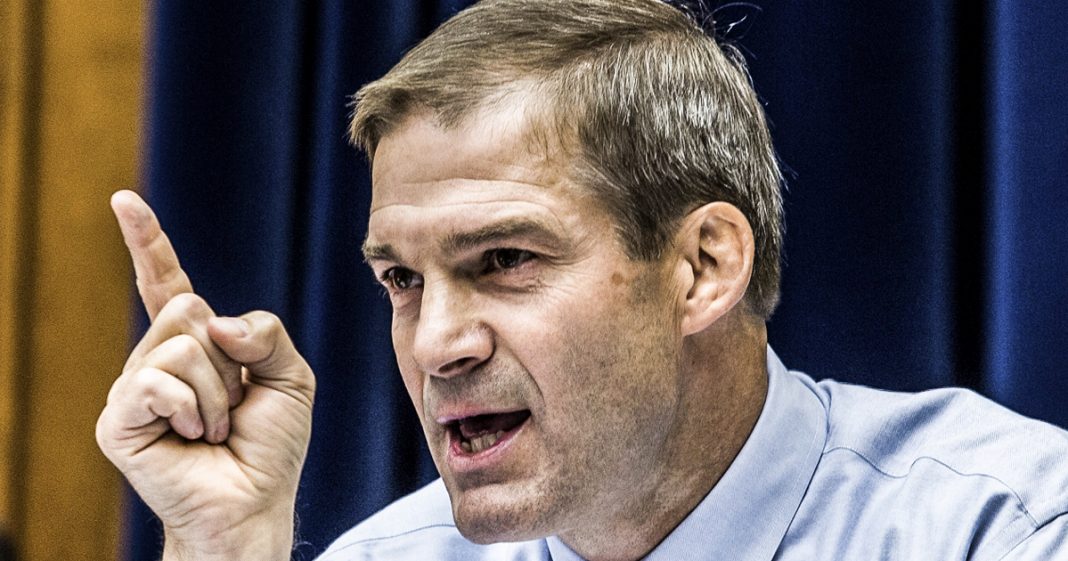 Republican Representative Jim Jordan, a staunch supporter of Donald Trump and one of Fox News’ favorite Republican Congressman, has been implicated in a massive sexual assault coverup that allegedly occurred during his time at Ohio State. Jordan allegedly helped cover up the assault that was taking place at the hands of a doctor to members of the wrestling team that Jordan coached. Ring of Fire’s Farron Cousins discusses this.

Republican Representative Jim Jordan has been one of the most conservative people in Washington DC for about a decade now. He was one of the founders of the House Freedom Caucus, which is basically made up of the Tea Party members and he has been the biggest mouthpiece attacking Special Prosecutor Robert Muller, going after Peter Struck, the FBI agent who was having an affair with another FBI agent and they sent a couple text messages to one another. He is one of Fox News’ favorite congressmen because he’s a staunch defender of the President and he’s trying to take down the alleged Deep State and according to recent reports, he also covered up sexual assault at the Ohio State University for almost a decade. See, Jim Jordan was an assistant wrestling coach at Ohio State University for many, many years and during the time that Jim Jordan was there, a doctor by the name of Richard Straus, a man who actually died in 2005, sexually assaulted, molested many boys at Ohio State who were on the wrestling team.

Dr. Straus was the team physician and as we’ve seen in too many instances recently, he was also showering with the boys. According to their reports, he was touching them inappropriately and according to recent reports, Jim Jordan, the assistant coach, who had a locker right next to Straus’, knew everything about it and helped the university cover it up. Jim Jordan, the rising star among Republican representatives, a man who is actually seen as a possible replacement for Paul Ryan, according to these boys who were molested, helped cover it up. One of them reportedly even went to Jim Jordan to tell him that he was being molested by the team doctor and Jordan did nothing. In fact, one of the kids says that Jim was actually the doctor’s right hand man. That’s how close they were. They say that there’s no way that anybody working in that environment in that university in that area didn’t know what was happening. They had reported it. The school did nothing. Jim Jordan did nothing.

They also said that Jim Jordan one time said that if the doctor tried anything like that with him, he’d kill him and yet, here Jim Jordan is today, after helping allegedly to cover up this molestation for years, serving as one of the most powerful members in Congress, helping to attempt to derail the Robert Muller investigation and now this man just found himself in a whole heap of legal trouble that most likely is going to end his political career, hopefully before the midterms hit and here’s why. Because even though legally, there’s not too much they can do to him, what’s going to happen at this point, which is what’s happened at Penn State, it’s happening at UCLA, it’s happening in the Harvey Weinstein case, is that all of the people who helped cover up the different abuses from the different abusers are being sued in civil court for their non-actions and that’s what’s going to happen to Jim Jordan here. Lawsuits are being filed on a near daily basis against the powerful men, women and institutions who helped cover up sexual assault. Ohio State is no stranger to this.

They understand what’s coming and I hope Jim Jordan understands what’s coming his way too because even though the doctor is now passed away 13 years ago, that doesn’t mean that the abuse goes away. It doesn’t mean that the physical, mental scars that these people had go away. They want accountability. They want justice and they’re coming after Jim Jordan right now with everything they’ve got and I support that 100%. They need to immediately contact a lawyer, file a civil suit against Jim Jordan for this cover up, then let’s go into discovery. Let’s do some depositions. Let’s get our hands on some documents and find out what a disgusting human being and what kind of disgusting behavior Republican Representative Jim Jordan helped cover up.