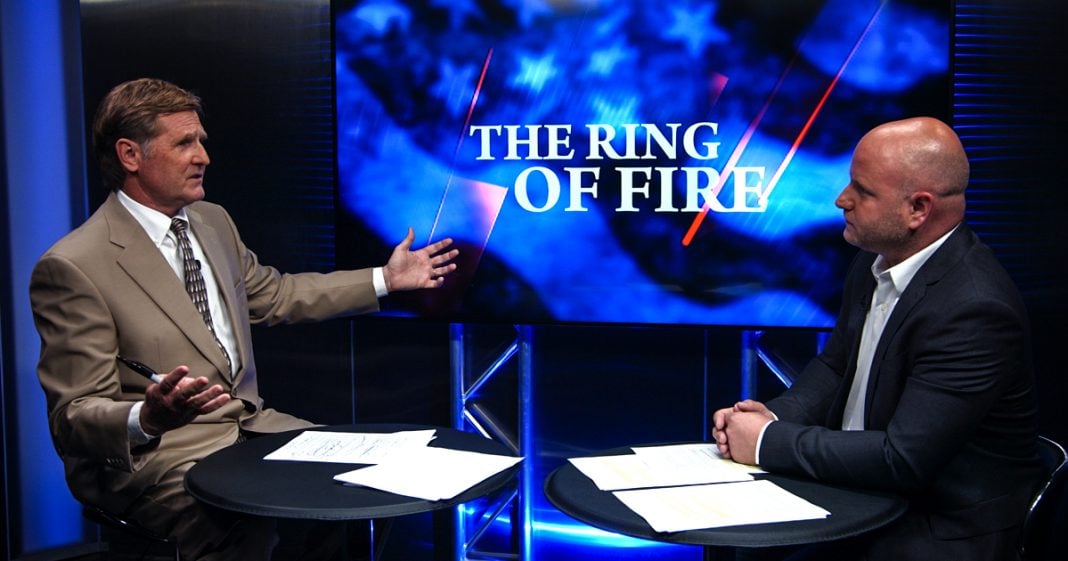 The Supreme Court this week upheld Trump’s travel ban, with the conservative Court majority saying that the ban is here to stay. Ring of Fire’s Mike Papantonio and Farron Cousins discuss this.

Mike Papantonio: The Supreme Court this week upheld Trumps travel ban with the conservative court majority saying that the ban is here to stay and, you know what, it is. Now, let’s back up. We had this discussion when this first happened. Right?

Mike Papantonio: It was like a year and a half ago. I don’t know. It seemed like a long time ago. You and I said, we concluded that this ban was going to be held constitutional. I remember being on the air saying and then people, we got covered up with emails saying how could you say that? Well, the reason we could say that is because we understood how much flexibility a president has with an executive order where you’re talking about national security. It falls within, you know, we’ve talked about this notion of police powers. This is very strong and they never … Nobody seemed to get that. The libs were saying well, this is going to be overturned, it’s just a matter of time. We knew this was going to happen.

Farron Cousins: Yeah. Just to point out to people too, it’s not because we agree on that on the merits and we think it’s good.

Mike Papantonio: No. I don’t agree at all.

Farron Cousins: It is because obviously with this conservative majority on the Supreme Court, there’s no way regardless of what the lower courts do, it was going to make it there and it was going to get upheld. But too, yeah, the power that the president does have while it’s being pushed to the extreme, something like this is unfortunately within his power. Now, that’s just the can he or can he not do this. Let’s talk about the merits of it. If this about national security, we’re banning people from Iran, Libya, Somalia, Syria, and Yemen who have not done a single thing over here to Americans to harm them. If you want to protect American citizens …

Mike Papantonio: How about Saudi Arabia?

Farron Cousins: Exactly. This was not, even though he argued it was, this wasn’t really about national security. Because if it were, if this was about treating human beings with decency, we would be going after Saudi Arabia on every possible front.

Mike Papantonio: Here’s what and I think a lot of people missed what was happening when this came about. The EU was saying to the entire EU, all the European nations, you’re going to have to let in … You’re just going to have to permit this immigration flow. That was part of the deal. As an EU country, you must do this. Greece, Spain, Italy, Belgium, all these countries all of a sudden seeing this huge influx of Syrians. African and Syrian primarily. What he did was he picked up on that. He picked up that that was causing a lot of problems politically for people like Merkel and May and people who are in leadership over in Europe and he said I’m going to use that. I’m going to say that’s not going to happen here.

Well, first of all, the EU’s proclamation that you must take these immigrations had no impact on us anyway.

Mike Papantonio: The UN, maybe. UN negotiation, you say well we’ll take in 10,000, 20,000 Syrians or immigrants that are justified to come into this country. The point being it wasn’t really about national security. It was about a political agenda that again Democrats were out maneuvered on. He knew he was going to win this. Any constitutional lawyer worth their weight would’ve said yeah you’re going to win this. He set the fight up. I don’t want happen in the US what’s happening in Italy and France and Switzerland or Sweden. I don’t want that happening in the US. We’re not part of all that. We’re going to be different. This was what he set up and the other side of it was if you remember you’ve heard the term America first.

Mike Papantonio: We’ve heard it ad nauseam. What is that? America first is again, it’s a brand. Just like Trump’s brand is we’re not going to allow immigration in and that’s really what this was all about. It was all about … It’s part of the immigration narrative. We’ve been sitting here watching. The average person watching all this has not paid attention to how strong the America first brand is becoming. Look at South Carolina last week. Was it this week or last week? Look at South Carolina. The big Trump … You know, the big.

Mike Papantonio: Okay. What was that? That was America first. What’s he done? He’s set up this … He’s set up the … This is all branding, Farron. It’s branding on America first, which is picking up a lot, a lot of steam. It’s almost like the tea baggers who picked up all that steam. This is the same kind of deal. His brand then becomes I’m not May, I’m not Merkel, I’m not these folks that are really messing up on immigration. This was the first shot. This happened during the time that was becoming a big, big issue over in Europe.

Farron Cousins: Right. Part of it is predicated on the fact that his supporters, those average people in that crowd at South Carolina Monday night, they don’t actually know what’s happening in Germany or anywhere else. It relies on this standard of ignorance about foreign policy.

Mike Papantonio: No. I disagree with you. I think they see the articles, they hear it on the news, another bombing, people being raped in Sweden when they try to go to festivals. They see this.

Farron Cousins: Yeah, but that’s not … Those are in the news because they are rare. This is not something that these people are dealing with constantly.

Mike Papantonio: Yeah, I get the point.

Farron Cousins: But, you do. You latch on. These Republicans, they latch on onto any single one issue or instance that they can and that becomes the norm. In their eyes, this thing, a bombing, it’s because well they get bombed all the time because of all the immigrants.

Mike Papantonio: Watch television, watch the series on Fox, watch any of these shows, they’re covered up with these issues about the dangerous Muslim. To say they don’t know, they know it. They know exactly what’s going on. It’s on their TV. It’s on movies. They kind of peripherally they know, they hear the stories that are happening in Europe. They hear the stories about Merkel and May. They don’t put everything together, but they get a sense that Trump is different because he wants to stop it and that’s what this ban was about to begin with.

Farron Cousins: Well, it is and it’s also like Donald Trump and Fox News just did this recently where they bring on a mother who had their child killed by an illegal immigrant here in the US.

Mike Papantonio: You got it. Exactly.

Mike Papantonio: MS-13 is going to kill you.

Farron Cousins: Right. You’re far more likely to be killed by anyone else in this country other than an illegal immigrant, but you highlight the one instance or the two instances or however many …

Mike Papantonio: And that State of the Union Address. My God, everybody in the audience was somehow affected by an immigrant. Family that was affected, they were affected. I’m telling you when he did this, it was all about branding.