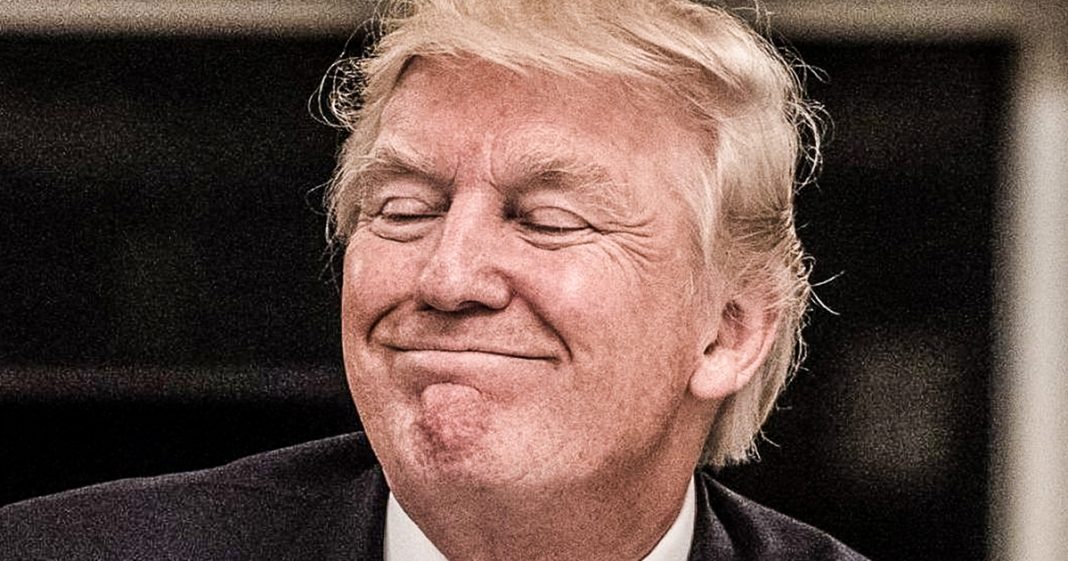 The Trump administration has admitted that satellite images show that North Korea is ramping up their nuclear testing facilities, but they either failed to say this to the President or he refuses to believe it. Trump tweeted out on Tuesday morning that things are going great with North Korea and that it is all because of HIM – Democrats would have had us in a war, he claims. Ring of Fire’s Farron Cousins explains why the President is either suffering from dementia or he’s simply delusional because everyone – including his own administration – knows that Trump’s claims are absolutely not true.

It’s no secret at this point that North Korea is still actually ramping up their nuclear testing facilities. That report came out late last week. The Trump administration has actually acknowledged that, yes, this is true. This is accurate. This is happening. So what did Donald Trump do? Did he say, “Oh. I got swindled in this deal. I’m gonna get you, Kim Jong-un.” Nope. Donald Trump took to Twitter Tuesday morning to say the following.

“Many good conversations with North Korea. It is going well. In the meantime, no rocket launches or nuclear testing in eight months. All of Asia is thrilled. Only the opposition party, which includes the fake news, is complaining. If not for me, we would now be at war with North Korea.”

Okay, several things to unpack from this idiotic tweet. First and foremost, “If not for me, we’d be at war with North Korea.” No, dumbass. If not for you, none of us would have been worried about a nuclear war with North Korea to begin with. You can’t escalate a situation then attempt to de-escalate it and say, “Look. I stopped a war.” No. You almost caused it. We were not on the brink of war with them until you came into office and started tweeting out insults to an unstable leader, but that’s what you did. You don’t want to take credit for that though, do you? You just want to take credit for going and meeting the dude over in China and talking about real estate because that’s what he did.

Second of all, either your administration is not filling you in on what’s happening over in North Korea, or you’re too stupid to understand what it means. I’m going to go with the latter on that because I know that your administration is required to tell you what’s going on. Whether or not you choose to listen is up to you because we know that you don’t always like to have your daily intelligence briefing, and when you do, you like them just filled with pictures. So what about those satellite images of North Korea ramping up its nuclear test facilities?

Donald Trump is absolutely playing his base on this issue, trying to convince them that he did something when he did nothing. There is no agreement. There is nothing officially set in stone at this point. He went over there for a photo op, talked about real estate the entire time, and they didn’t do anything.

Now, like most Americans, I do not want any kind of war or conflict at all in North Korea. I saw a recent thing from Tim Shorrock from The Nation saying that South Koreans are appalled that the America Left isn’t in favor of peace on the Korean Peninsula. That is absolutely 100% false. Under no circumstances whatsoever do I want any U.S. troops, guns, planes, tanks, bombs, bullets, anything to fly on the Korean Peninsula, or really anywhere on this planet. So stop acting like the Left doesn’t want peace.

If Trump was able to actually do what he set out to do or told us he was setting out to do, I would support it. The problem is we have to see past the bullshit and understand that Trump didn’t go over there to negotiate peace. He went over there to negotiate real estate deals. The man said so himself. So if you are saying that that didn’t happen, then you are denying reality. Not a single soul on the Left has talked about not wanting peace in Korea. That’s not true.

But I am sick and tired of some of these people on the Left saying, “Well, Trump deserves credit for this.” He didn’t do anything, and if you think he did, then you are an idiot because all of the evidence, every single piece of it, proves that Trump accomplished nothing with his North Korea summit. They’re still ramping up nuclear facilities and Trump is sitting here congratulating himself, patting himself on the back because he knows when he finally lifts those sanctions, he’s going to get his hands on some pretty juicy real estate.