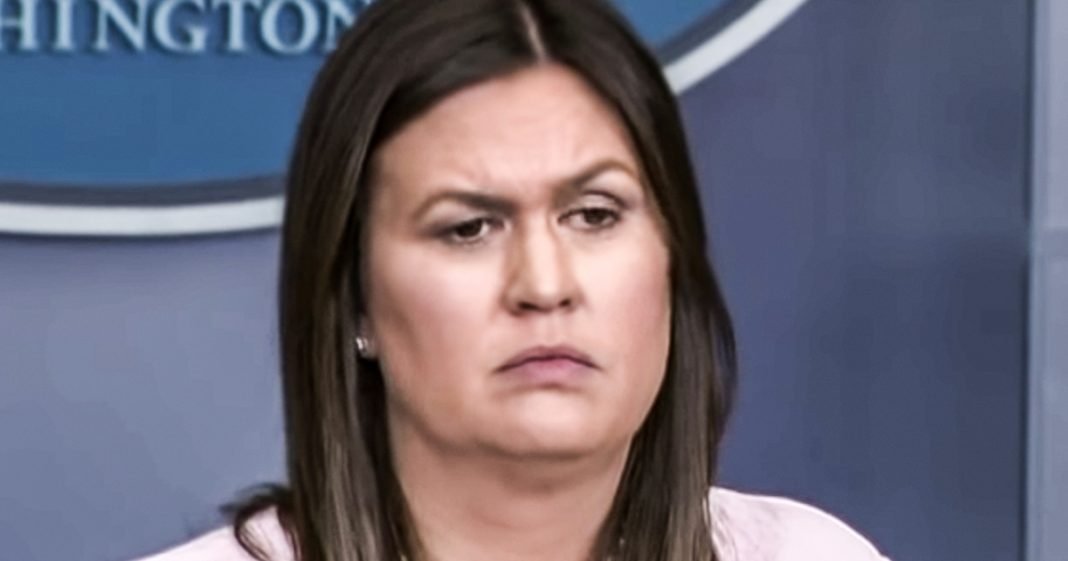 During Monday’s White House press briefing, Sarah Huckabee Sanders was asked about Donald Trump’s lies about pushing Republicans to vote for an immigration bill. The reporter presented both tweets from Trump – the one where he told them how to vote and the one where he said he never pushed them to vote for it – and yet Huckabee Sanders STILL lied by saying that’s not what happened and then proceeded to blame Democrats for it. Ring of Fire’s Farron Cousins discusses this.

In keeping with my theory that there’s literally nothing that the Trump administration will not lie about, Sara Huckabee Sanders, during Monday’s White House press briefing, was actually forced to tell a lie about a lie that Donald Trump had just been busted on two days prior. Take a look.

Then, on Sunday, he wrote on Twitter, “I never pushed the Republicans in the House to vote for the immigration bill, either Goodlatte I or II.”

Why would the president lie about something like that?

Sarah H S:
All right, he didn’t. The president has talked along, we’ve laid out the priorities and the principles that we support that we wanted to see reflected in legislation, but at the same time, the president wasn’t aggressively lobbying members, because he knew that Democrats in the Senate still were unwilling to actually come to the table and focus on solutions rather than playing political games. We could have gotten it through the House, but that doesn’t work if we can’t get it through the Senate, and Democrats have made it abundantly clear that they don’t actually want to fix problems. They just want to talk about this all the way. I guess, for some reason, they think this is a good issue for them, although it isn’t. And frankly, I think it’s outrageous that Democrats have not come to the table and try to help fix this problem.

All right. So, there’s several things to point out here. First and foremost, Matt Nussbaum of Politico is the man who asked that question. He read both the tweets. I mean, it’s right there, Sarah. Trump tweets one thing, says, “Vote for this bill.” Then, a day or two later, tweets out, “I never said the thing that is currently on my Twitter feed,” and verifiable. So, everybody at that point knew the president lied. Nussbaum was 100% correct. And then, when he asked you point blank, “Why did he lie about this,” you say, “He didn’t.”

I mean, you were just confronted with the information. I know you’ve also probably seen it on Twitter and read about it in the news. It’s right there, black and white. The president lied, and the first words that came out of your mouth were, “He didn’t.” You, Sarah, have reached a new low. I mean, presented with the facts right there in front of you, and you still can’t bring yourself to tell the public the truth. That is absolutely beyond disgusting behavior for a human being.

And then, you somehow managed to make it so much worse, because rather than admitting that the man you work for either has dementia and didn’t remember that he tweeted out the original or that he is completely clueless, you decided to go on some weird, incoherent tangent about all of this being the Democrats’ fault. No, that’s not true. Either Sarah, you can’t cover up a lie trying to cover up one lie by then lying a third time. This isn’t lie-ception here, but that’s what you’re trying to make this.