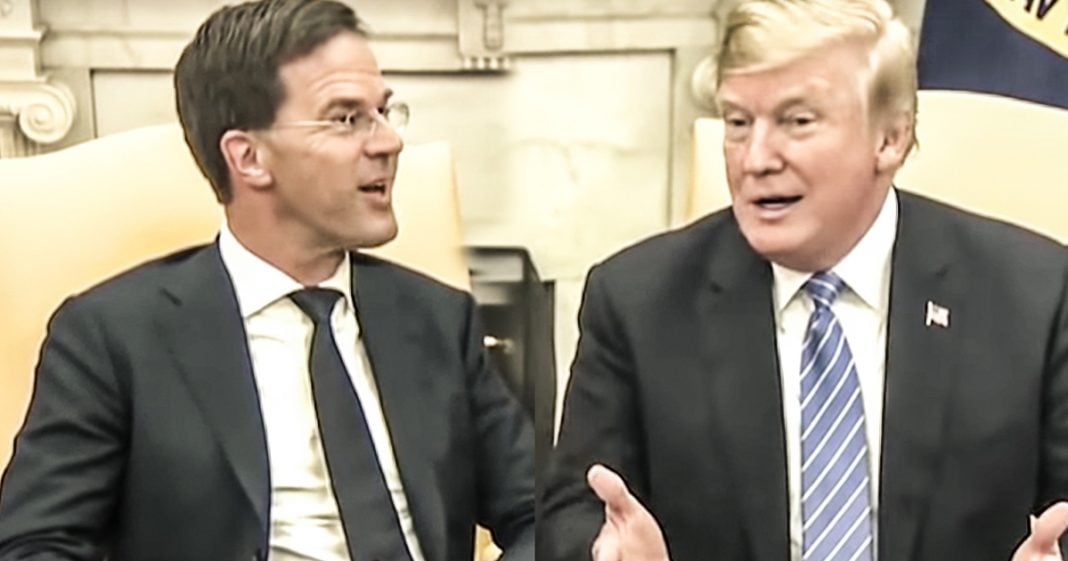 Prime Minister Mark Rutte of the Netherlands visited the White House on Monday, and after what had seemed like a cordial visit at first quickly devolved when Donald Trump began telling Rutte how “positive” tariffs can be for countries. Prime Minister Rutte responded with a very loud “NO!” when Trump made that remark, which shocked the President beyond recognition. Ring of Fire’s Farron Cousins discusses this.

On Monday, Donald Trump welcomed Prime Minister Mark Rutte of the Netherlands to the White House where things actually got off to a very good start. We actually saw media outlets tweeting things out, mostly right-wing media outlets and media outlets from the U.K., tweeting out the fact that, oh, look, the liberals are wrong. There’s no tension between the United States and the European Union. Look at this. He’s meeting with Prime Minister Rutte. Everything is going great and then everything suddenly started not going great, as pretty much everyone could have expected, because Donald Trump during this meeting, during the time when they’re both sitting in their chairs and you have the media all around them, taking the pictures and asking questions, Trump starts to talk about tariffs, right?

He’s put billions upon billions of dollars worth of tariffs on goods coming from the EU into the United States. He started to talk about why this is a good thing. “Tariffs are good,” he said. Immediately upon saying that for his tariffs are actually a positive, Prime Minister Rutte, and my apologies if I’m pronouncing his name incorrectly. But anyway, Prime Minister Rutte shouted, “No!” He interrupted Donald Trump’s horrible little diatribe by shouting, “No!” He then said, “Tariffs are not good,” to which Donald Trump replied, “Just think about those cars that pour in here.” Rutte again interrupted and said, “It’s not positive. We have to work something out.”

See, Donald Trump doesn’t understand what he’s doing with these trade wars. He doesn’t understand the impact that tariffs actually have, both on other countries and here in the United States. So, it was refreshing for him to actually talk to a fellow world leader who does understand that and who wasn’t willing to sit quietly by as Donald Trump spread these lies. But, what’s going to happen now? Because, we know how fragile Donald Trump’s ego is. We know how vindictive and petty and spiteful this man is, and now that we’ve had the prime minister of the Netherlands yell, “No,” to him, I can only imagine what kind of horrible retaliatory actions Trump is going to take against the European Union now.