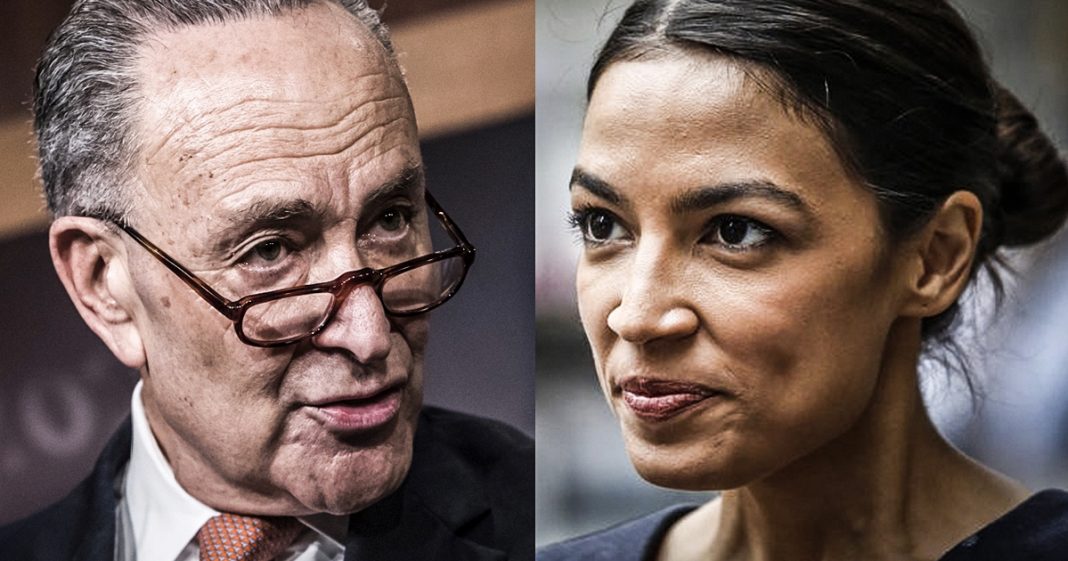 Democrats still don’t know what to make of the amazing primary victory of Alexandria Ocasio-Cortez, and many are still freaking out about the fact that a Democratic Socialist was able to unseat a stalwart of the Democratic establishment. So now these panicked Democrats are warning us that if the Party moves too far to the left, they can kiss the midterm elections goodbye. These corporate Dems need to wake up and see what’s happening in this country, as Ring of Fire’s Farron Cousins explains.

Establishment democrats are still confused about how they should be reacting to last week’s primary victory of Alexandria Ocasio-Cortez over establishment democrat Joesph Crowley, who many believe was next in line to take over after Nancy Pelosi eventually retires.

So in the week since that has happened we have seen these establishment types. Nancy Pelosi saying, “Whoa, whoa, whoa. This is just an outlyer.” I mean, she can win in the Bronks, but she can’t win in the Midwest which is probably good for Ocasio-Cortez seeing as how she’s not running in the Midwest, and she ran in the Bronks and beat an establishment democrat who had been there for more than a decade. I mean, top ranking guy, next in line for the throne of the party and he got primaried by a 28 year old, hardworking democratic socialist, justice democrat because people want change.

This past Sunday Senator Tammy Duckworth, a woman I respect and admire, probably more than most people that are currently in DC. She is right at the top of my list, had to go and say that, “Yeah. This was a victory in the Bronks, but there’s no way she can win in the Midwest,” and then, “If the party moves too far to the left we will lose.” That is what Senator Tammy Duckworth said. And it’s a shocking feeling to lose so much respect and admiration for somebody through one thing that comes out of their mouth, but that is 100% what happened when I heard Senator Duckworth say that.

This is absolutely appalling, and I don’t understand what the democratic elites don’t understand about what’s happening in this country. Stop saying that somebody like Ocasio-Cortez can’t win in the Midwest. Have you looked at the polls, you idiots? Because I’m assuming you haven’t, luckily I have. Most people in this country have, and they know that a majority of people in the United States of America want a medicare for all, or single pair option. They like the idea of universal healthcare. They support, overwhelmingly, debt-free college. The majority support getting money out of politics. And the majority, both left, right, and center, actually support action to mitigate climate change.

Where are the establishment democrats on those issues, huh? Why are they not out there reading polls, knocking on doors like Cortez did in the Bronks? I think she knocked on tens of thousands of door, actually, made tens of thousands of phone … over a hundred thousand phone calls, over a hundred thousand text messages. She went out and she did this grassroots style without taking a dime from corporations, and she beat a lifer, a democratic establishment lifer.

And you people have the audacity to go out there and say, “Oh, this isn’t gonna happen anywhere else. She can’t win in the Midwest.” I think she has a better shot at winning in the Midwest, even though she’s not running there, than anybody else. Why? Because she is relatable in a way that other people, like Pelosi, are not. She, months ago, was waiting tables, working in a coffee shop. She went out there and did the legwork herself. She, like most of us in this country, have been working since the day they were eligible to legally work in the United States.

She’s not a millionaire. She doesn’t know lobbyist. She doesn’t know all the powerful people in this country to get whatever she wants. She saw that there’s a problem with the government. She ran for office. We won, and she did it the way that every politician should. She has a better chance of winning Wisconsin or Nebraska than Nancy Pelosi does, not just because of her willingness to go out there and actually do the work, but because of the fact that she actually is in favor of the things that a majority of people in this country are in favor of, because when you strip party identity away from a policy, the majority of people in this country, Republican and Democrat, actually want these progressive policies put in place. That’s some the establishment needs to understand or else they can kiss the midterms goodbye.