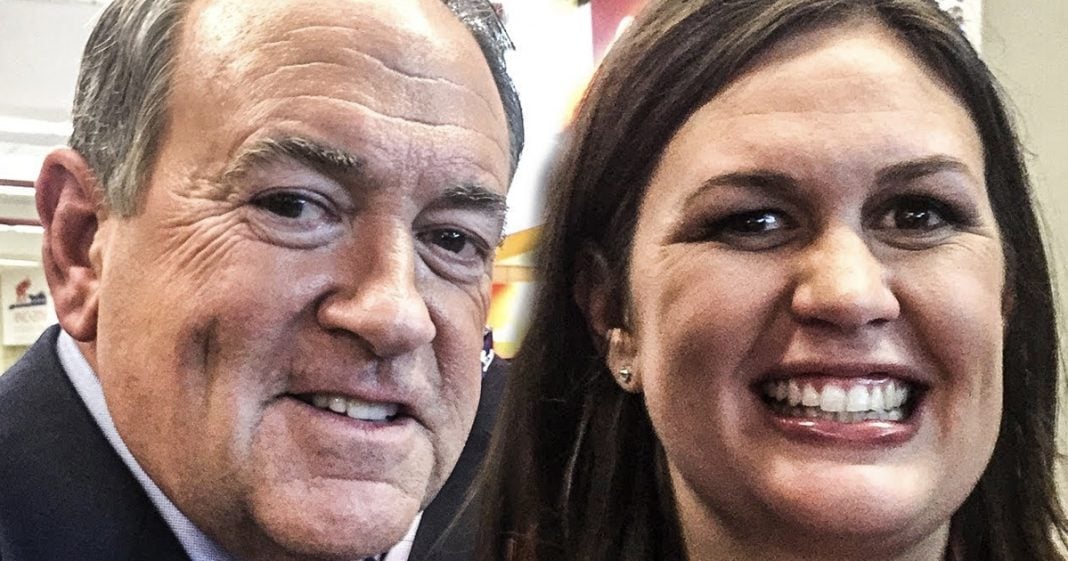 If you’ve ever wondered how Sarah Huckabee Sanders can lie with such impunity and always deny the reality of the world we live in, then all you have to do is take a good look at her father. Mike Huckabee set the standard for the Huckabee family, and his daughter is absolutely following in his footsteps as a horrible human being. Ring of Fire’s Farron Cousins discusses this.

If you’ve ever actually wondered why Sarah Huckabee Sanders is such a horrible human being then I suggest you pay about five seconds of attention to her father. Mike Huckabee, the former governor of Arkansas, when you watch him, when he does interviews, the things he says, you can see that this guy has absolutely no concern for reality or the truth and instead basically just makes up whatever comes to his head.

A great example happened this past weekend when Mike Huckabee went on Fox News and he once again attacked the incivility of the democrats. Then he claimed that Donald Trump has never ever encouraged violence against anybody that disagreed with him, which obviously for anyone who hasn’t seen it, there is a video clip going around. There’s actually a link to it in the article which is linked in this description. Trump has done it repeatedly, more so than anybody else.

Last we checked, including Maxine Waters, nobody on the left has called for any kind of violence whatsoever against republicans or people that they disagree with. You see reality didn’t matter there to Mike Huckabee and that is exactly where Sarah Huckabee Sanders gets it. Her father has been a liar for decades. He’s been in the public eye for decades, first as governor as Arkansas, then as a repeated failed presidential candidate. Remember he tried to hitch his evangelical wagon to the woman who refused to issue marriage licenses to same sex couples because she didn’t want to do her job. Huckabee thought that was going to be great for him, but unfortunately Ted Cruise snuck in and got there before he did.

That’s the kind of person Huckabee’s always been. Jump on the most disgusting, horrible person you can find if you think it’s going to excel your career, and that is what he did. His daughter saw that. His daughter learned from that, and that’s why she is the way she is.

Let’s not forget that Huckabee is clearly been a horrible parent throughout his kids’ entire childhood because his son, while a counselor, I guess, or whatever you call it, at Boy Scout camp murdered a dog with a fellow camp counselor that got them both fired and kicked out of the Boy Scouts.

Unfortunately in that story there’s actually not enough information. We don’t know why they actually killed the dog. We don’t even know how they killed the dog. We just know that the 17 year old David Huckabee, along with his buddy, killed a dog and nobody’s story seemed to match with anybody else’s story about the particular incident.

In case you were wondering, yes, that is 100% psychotic behavior and is typically a warning sign of a very violent and deranged individual. Mike Huckabee didn’t see it like that. He went out and did media interviews when the story resurfaced in ’07-’08 and excused his son’s psychotic behavior trying to write it off as no, no, no. He was being humane by killing the dog. That was a good thing he did. It’s not a presidential issue. It certainly doesn’t have any bearing on how I raised my children. No, but it does.