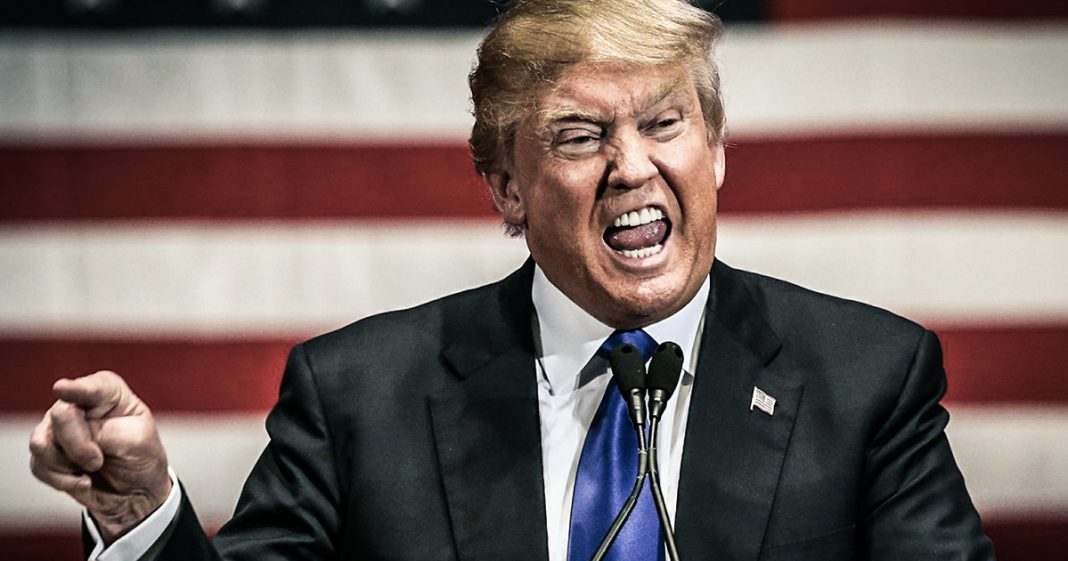 Donald Trump has laid out to his aides what kind of person he’s looking for to replace retiring Supreme Court justice Anthony Kennedy. Among his demands is that the nominee have a “portfolio” of academic writing, but then the President admitted to his aides that he’s not going to read it, he just wants to know that it exists. The President’s low standards are going to screw this country more than we realize, as Ring of Fire’s Farron Cousins explains.

According to those closest to the President of the United States, he is actually going to take his time, do some research, and pick the best person possible to replace retiring Supreme Court Justice Anthony Kennedy. Although these aides also admit that, yeah, that’s not really going to happen. According to a recent article in the Washington Post, the aides who spoke with the Post said that Donald Trump basically has three different tiers that need to be met for his next Supreme Court nominee. And the first one is actually the most troubling.

They said that Donald Trump wants his next Supreme Court nominee to present a portfolio of academic writings so that the President knows that this person understands the law, they know what they’re talking about and he’s not going to be made a fool of if he nominates somebody because he’s going to know that they know what they’re doing. The only problem is that the aides then said Trump has already admitted that he’s not going to read it.

So, basically, Donald Trump wants this person, whoever it may end up being, to submit a portfolio of writing that he’s then going to … oh okay, well I can throw this away now … What’s the point? I mean, somebody could literally hand him just a packet of Marvel Universe fan fiction and he wouldn’t even know it because he’s not going to open it. That’s what his own aides are telling us. Now, of course, that is not the only criteria but that is just the first one. First, you gotta hand Donald Trump a book, it doesn’t matter if you actually wrote it or if you just printed it off of Tumblr, whatever you want to do. You give him a book and you pass tier one.

Tier two, he says that he wants somebody who is not weak. Somebody who’s going to fight back against the political establishment, fight for, I guess, the underdogs. So, does that mean that he’s actually going to pick somebody who’s going to challenge the corporations that are destroying this country? Because that’s what it sounds like to me, but, what it really means is that Donald Trump wants somebody just like him who says to hell with what people think, to hell with the Constitution, I’m just going to write whatever kind of opinion I want because Donald Trump didn’t read that portfolio to realize I’m a complete moron.

Tier number three, and this is the final one. He wants somebody who’s going to interpret the Constitution the way the framers meant it to be, which is actually really bad news for all of the Second Amendment rights people because what the framers wanted the Second Amendment to be, what it was at the time they wrote it. So, you can have a musket that can shoot about one round every three minutes and is only accurate if you’re within about 15 feet of another human being … and for the most part they’re completely non-lethal because of the inaccuracy of them and the less than stellar fire power that they have. So, hey, I’m all for that. Let’s get somebody who’s going to take that Constitution right back to what it was on that day when the framers signed it. Let’s do that ’cause that’s perfect.

Now, of course there’s actually a fourth tier as well. A fourth tier that isn’t necessarily one of Trump’s but it’s something he’s done with all of his other nominees, people he’s put in his cabinet, whatever, and that is this; Trump will be looking also for personal chemistry. Central casting looks and relatable life stories. So, Donald Trump is essentially casting a reality show at this point. You have to get along with him even though this person gets a lifetime appointment and Trump’s probably not going to make it to a second term but you gotta be good friends with him and, more importantly, good God … you gotta be pretty, you gotta look the part, right. You gotta wear that black robe and have people say, wow, I wonder what’s underneath that, right, because that’s what’s important to Donald Trump.

He has made this entire process a complete laughingstock. He is going to destroy the Court for a generation because he wants a pretty, but stupid, person who will sit on that Court and be completely loyal to him. That’s what’s so scary about this. It’s not just that we’re going to get somebody who’s a horrible conservative, but we’re going to get a horrible conservative who’s going to do whatever it takes to make Donald Trump happy.