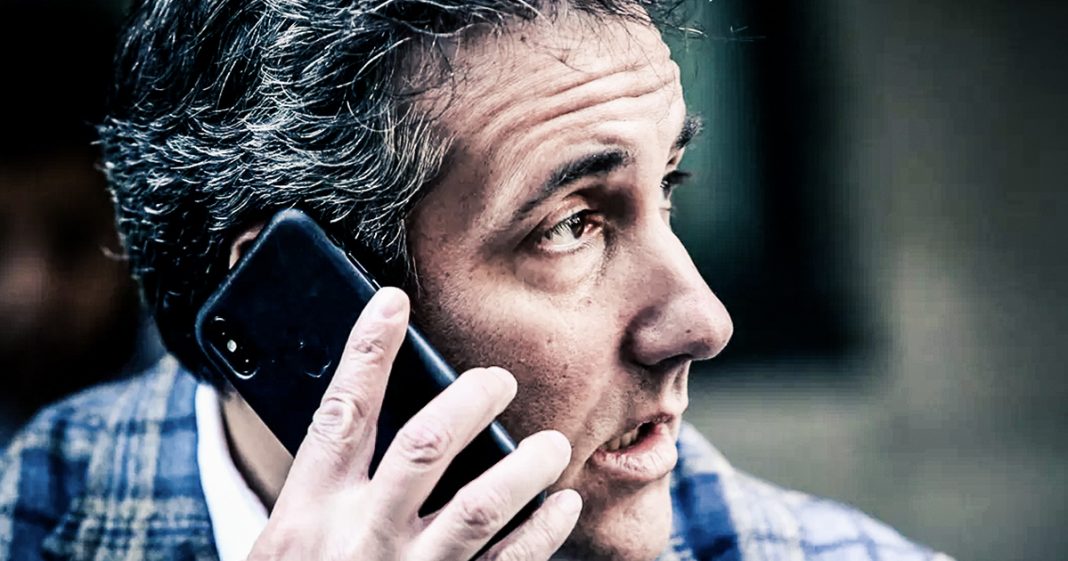 Michael Cohen said during a recent ABC interview that his loyalty was to his family and his country, NOT to Donald Trump. This marks a sharp turn in Cohen’s allegiance, as just a few months ago he made it clear that he was loyal to the President above all else. This could mean that Cohen has decided to flip, or it could be a message to the President to help him out or prepare for the worst. Ring of Fire’s Farron Cousins discusses this.

On Monday morning, George Stephanopoulos with ABC interviewed Michael Cohen, Donald Trump’s former lawyer/fixer/guy who’s under multiple investigations at the moment. And during that interview, Stephanopoulos asked Cohen point blank, “Are you loyal to Donald Trump?”

And Cohen said, “Let me make it perfectly clear: my loyalty is to my wife, my children, and my country, not Donald Trump.” Now that may seem like a small insignificant statement, but right there, that tells us everything we need to know about the status of the Michael Cohen investigations.

It can basically mean one of two things. One, it could confirm the previous reports that we had that said Michael Cohen was ready to flip on Donald Trump and cooperate with investigators in order to both protect his family and hopefully keep himself out of prison for the rest of his life. Those reports were given by a close friend of Michael Cohen, somebody who knows him, spends time with him, and understands what is happening with these investigations. So that’s option one, and that is the most likely.

But, according to that same friend, we also know that Michael Cohen is angry that Donald Trump is not coming to his defense and that he is not footing the bill for Cohen’s legal bills. So, this statement could have also been basically a shot across the bow to warn Donald Trump that if you do not start supporting me, if you do not start helping me, I am going to start working with investigators in order to protect my family.

Now, Trump has said in the past that he’s not worried about Cohen’s loyalty. He’s a loyal guy; he’s not going to flip. But it still begs the question of why would you even worry about somebody flipping unless they had something to flip on you? That’s the point so many people miss in these conversations. Trump has said repeatedly about other people, you know, “They’re not going to flip.”

If you haven’t committed some kind of crime, there’s no way somebody can flip on you. That’s how it works. They can’t just start making stuff up that you did and hand that over to prosecutors and get a reduced sentence. It doesn’t work like that. They have to give information that is verifiable, something that could lead to additional prosecutions.

And if Cohen does have that, then it is his responsibility to turn that over to prosecutors. I mean, this has less to do with loyalty, less to do about protecting your family, and more to do with actually protecting the rule of law here in the United States.

You know, anybody who’s ever been to an airport since 9/11 understands that, you know, you get those little messages coming across the PA system that says, “If you see something, say something.” Well, that’s what’s happening right now with Michael Cohen.

If you saw something, say something. If you know that this man or any other person broke the law, it is your responsibility, as a United States citizen, as a taxpayer, to come forward and hand that information over. He may have been your friend then, or at least you may have thought he was your friend, but you know as well as everybody else does, Cohen, that Donald Trump is not your buddy. He’s not your pal. He’s not the guy that’s going to protect you from anything that is coming your way.

The only way that you can save yourself and help your family and spare them a lifetime of pain from your imprisonment is by turning over to prosecutors every single thing that you have on Donald Trump, even if he came forward and he said, “I’m going to pay your legal bills. I’m going to tweet about you, positive stuff every day,” it’s not going to keep you out of prison.

These are state crimes you’re being investigated for. He can’t pardon those. There’s nothing that man can do to help you. The only person who can help you are the people trying to prosecute you. You work with them, you may just not end up in prison for the rest of your life.