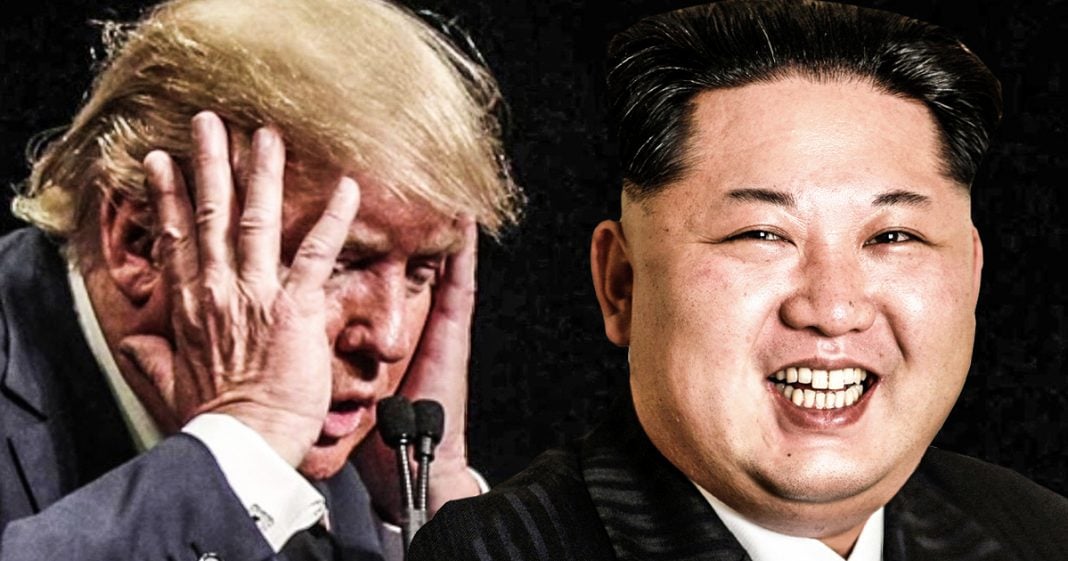 Donald Trump claims that he got North Korea to “de-nuke” as blowing up in his face, as new satellite images show that the country is actually working on UPGRADING their nuclear facilities. So they are literally doing the exact opposite of what Trump claimed he got them to do. This man is not a great negotiator, he’s not even a decent negotiator – he’s a complete fraud. Ring of Fire’s Farron Cousins discusses this.

It’s exceptionally disturbing right now to see some people out there, both left and right, talking about the fact that Donald Trump’s meeting with North Korean leader Kim Jong-un was historical and that he accomplished something no other U.S. president has been able to accomplish, which is North Korea’s denuclearization. Donald Trump did not accomplish a single thing at that meeting other than handing North Korea several of their demands, while literally getting nothing in return.

The reason we can say that he got nothing in return, even though he said they were going to denuclearize, is the fact that satellite images have proven this week that North Korea is actually not tearing down their nuclear facilities, but they are in fact upgrading them. According to new satellite images at at least one nuclear research facility in North Korea, they’re increasing their water cooling tanks. They’re building larger ones. They’re putting new buildings up. They’re working on other activities that indicate their nuclear research is actually expanding and not shrinking, as Donald Trump continues to tell us.

Donald Trump, the very stable genius, great negotiator, has failed miserably on everything having to do with North Korea. Anyone who says otherwise, anyone who tells you that this meeting was good, or productive, or what needed to happen, is an absolute liar. All of the available evidence shows that Trump has accomplished nothing with this meeting. The only thing he accomplished was actually handing Russia what they wanted, which was for the United States and South Korea to stop doing joint military exercises in the area. That had long been on Russia’s wish list, and that’s basically the first thing Donald Trump agreed to stop doing. South Korea wasn’t happy about it. North Korea was, and Russia was.

So far North Korea is not upholding any part of the alleged bargain that they made. Donald Trump got played, and he got played because he’s not a very smart guy. Those out there who are still praising him for this are also not very smart people. If you thought for a second that anything good would come from this, then you haven’t been paying attention to world history for the last 20 years, have you? There have been more than a dozen different occasions since the Clinton administration when U.S. presidents were able to secure an agreement from North Korea that they were absolutely not going to pursue nuclear weapons or nuclear research, and every single time they just didn’t follow through with the agreement.

So, if you thought this was going to be any different, you’re absolutely bonkers. North Korea is not going to give this up. That is the only bargaining chip they have as a country. It’s the only thing that gives them the little appearance of having any kind of power whatsoever. For a country ruled by a brutal dictator who kills his own citizens, you would think that they would want to hold onto power, right? That seems to be how dictators operate.

As it turns out, according to the new satellite images, that is exactly how North Korea is going to operate. They’re not going to denuclearize because of an agreement with Donald Trump because Trump wants to go over there and get his hands on some beachfront real estate. The only thing that’s going to work is a humanitarian effort to not only save the impoverished citizens of North Korea, but to also impose sanctions on the higher-ups. Squeeze the top out without using military force, while aiding the people so that they can protect themselves and educate themselves about what’s actually happening in their country. A ground war and air war, any kind of thing where it involves guns, tanks, or bombs, or drones is not going to work. Agreements are not going to work. Help the people. Sanction the administration.

There are ways to do that. The government just has to figure it out and put it in place if they want to see change in North Korea. Until then, they’re going to continue playing us. I guarantee you, Trump’s going to end up dropping these sanctions eventually, and his companies are going to be the first one to go over there and scoop up all of that real estate.