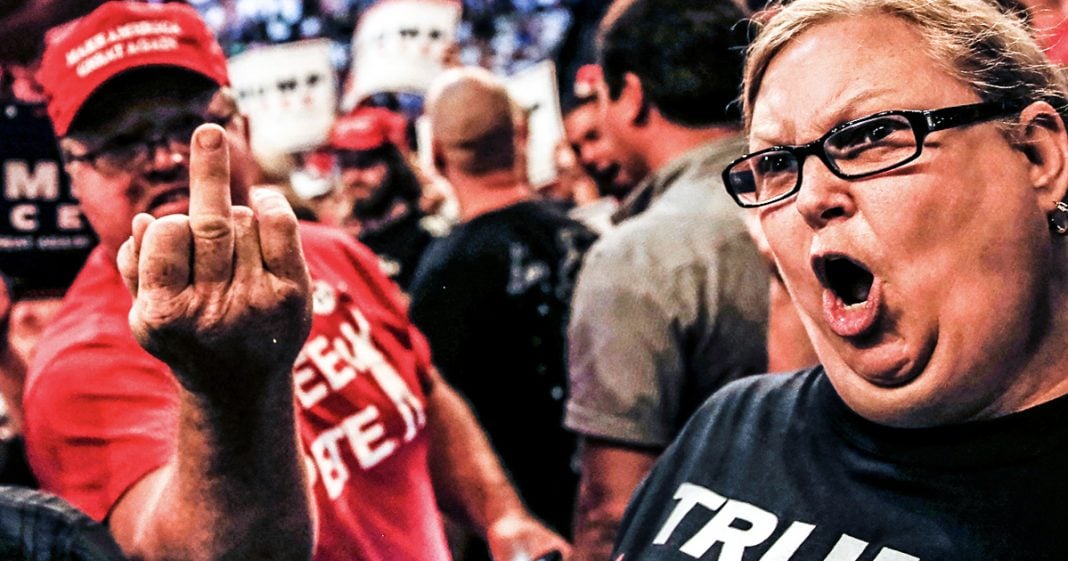 Republicans are working with Donald Trump in DC to scale back programs for the needy and to enact stricter requirements for those seeking federal aid. What Trump voters don’t realize is that THEY are the ones who will be most affected by these new rule changes, and the people they thought were protecting their well-being are screwing them over without a care in the world. Ring of Fire’s Farron Cousins discusses this.

I think one of the funniest things about Republican voters, in general, is that they have absolutely no idea that anytime they go to the ballot box, and they cast their vote for a Republican, they’re voting against their own self-interests and self-preservation. Here’s what I mean. A story came out this past week detailing several initiatives being taken by both the Trump Administration, itself, and the Republicans running Congress. Last week, Republicans in Congress passed a bill that would put work requirements from anyone aged 18 to 59 from receiving food stamps. The Trump Administration, itself, is currently working on regulations to require more work requirement type things in order for people to receive Federal assistance from the Federal Government.

Here’s the thing. These decisions, by Republicans and by the Trump Administration, are going to affect Trump voters more than anyone else in this country. The Atlanta Journal Constitution just did a breakdown of the numbers and, yeah, the way it works down is that most of the people receiving these Federal benefits from the government, food stamps, Medicaid, things like that, they’re actually Republicans. They live in Republican districts. They vote for Republicans. They voted for Donald Trump and helped put him in office. It is the red states that take more Federal assistance than anyone else. They’re the ones who just got screwed over by the people that they continue to tell us are taking care of them, the forgotten majority. They’ve got our own economic interests at heart. Right? It’s that economic anxiety thing you heard about.

No. These Republicans aren’t doing anything that they didn’t already tell us they were going to do. You probably just didn’t think they were going to actually do it. You were just drawn to them because of all the horrible things they said about black and brown people and Muslim people. And that’s why you voted for them under the guise of economic anxiety. Well, guess what? Your economic anxiety may not have been completely real back then, but trust me, it is about to be. And it’s being brought upon you by the Republicans that you put in office. Next time you go to get your new set of food stamps, or get your Medicaid, take your kids to the doctor, and you get declined because of what the Republicans have done to those programs, I guarantee you these people are going to be out there blaming the Democrats for it.

I actually was in the doctor’s office a week ago and I heard an elderly man, who was on Medicare, bitching about a brand new regulation that Obama just put in place. He was at the doctor because he was going to get is referral for his chemotherapy, that Medicare was paying for. But he had to go to the doctor first, because of this new Obama requirement. I didn’t have the heart to tell this man, who has cancer, that Obama’s been out of office for 18 months. But that’s the mentality that these morons have and, yeah, they’re morons. I hate to say that about an elderly man with cancer, but I heard it with my own ears. This is what these idiots believe.

Every bad thing that Republicans do to them, they somehow twist it and blame it on Democrats, even Democrats that aren’t in office anymore. That’s how stupid they are. And that’s what’s going to happen with this. Republicans in D.C. just screwed over their base more than these people will ever realize. And when shit hits the fan, they’re going to continue to blame the Democrats for it, because that’s all they know how to do.