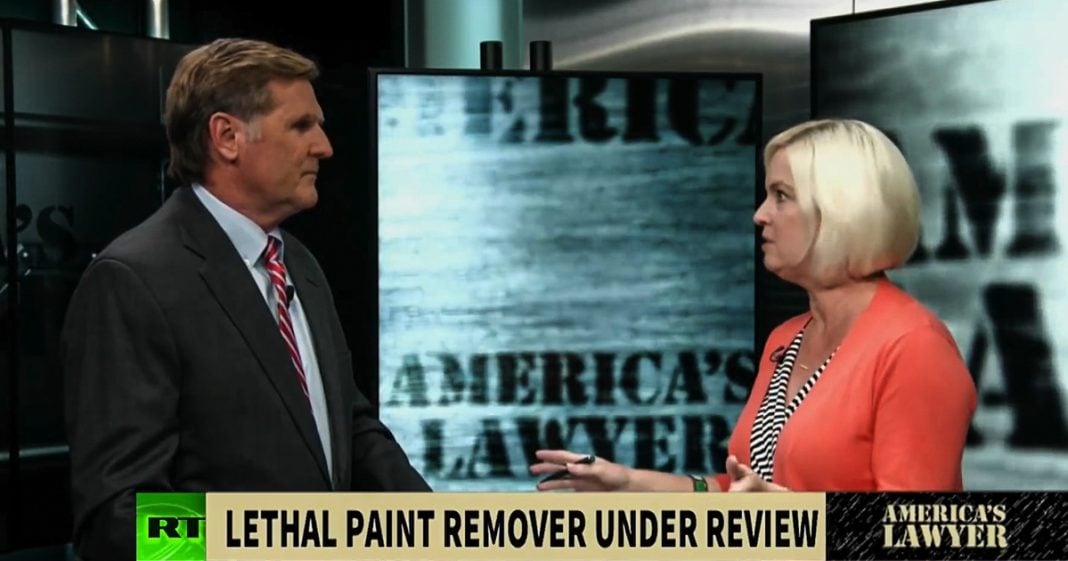 Via America’s Lawyer: Mike Papantonio is joined by Mollye Barrows to highlight a new ban on a chemical found in paint remover after dozens die.

Mike Papantonio: To almost everyone’s surprise, the EPA announced that they’re going to finally be taking action against the painter remover that’s said to have killed a lot of people since the 1980s. The EPA originally proposed banning the chemical during the Obama administration, but that changed. They changed their position after the new administration appointed Scott Pruitt, as you mind imagine.

Joining me to talk about this is Mollye Barrows, legal journalist for the Trial Lawyer Magazine. Mollye, everything you read about Scott Pruitt is this guy is a true freak. I mean, if you were to put all the freaks, the list of freaks in the Trump administration, this guy is going to be top of the freak list. So I have a hard time believe that Scott Pruitt actually has taken a stance that’s actually good for consumers. Help me with this.

Mollye Barrows: As you know, we were just talking. I’d like to think that maybe he had a paying of conscious, but maybe that’s not the right way to word it. But in a nutshell, as you said, as soon as he came into office as administrator of the EPA, he started immediately unregulating and cutting out the heart of many of the rules that the Obama administration passed during the EPA. Including a ban on this particular deadly chemical, methylene chloride, which is commonly found in paint strippers and paint removers. It’s used by a lot of do it yourself-ers as well as trained contractors. So there have been, as you mentioned, a number of deaths linked to this particular chemical since, gosh, even dating back to the 1940s by one independent study.

So Pruitt comes into office, he’s in gutting mode, and says, “I’m going to put a hold on this ban of this chemical for now. I’m going to stop what Obama was trying to do. I’m not going to address it.” But all these Democratic lawmakers, especially on the heels of two more recent deaths, again of just young men using this. One was a trained contractor, another one was trying to open up his own business. They used it and then they die almost immediately. The only risks mentioned on the cans that can be bought at any hardware store are warnings of cancer risks.

Mike Papantonio: Let me just tell you something. If I’m betting, it is the only way I can see Scott Pruitt doing something noble for consumers. I mean, I’m not … Really, I sincerely mean this.

Mollye Barrows: No, I get it.

Mike Papantonio: Is maybe there’s a corporation that’s competing with this company and he has some … That’s the only way I can see that I can make this fit to Scott Pruitt.

Mollye Barrows: One of the things that was interesting to me is that as soon as he refused to uphold this ban, back in December he said, “No bans that are put in place under Obama administration, I’m going moving forward with them.” So immediately all these Democratic lawmakers, especially ones from the home states of where these people had died, were in his ear publicly and the families were in his ear privately. So it was this behind the scenes lobbying campaign that apparently he met with mothers of the two most recent victims. They brought pictures of their sons, the death certificates, and just the over the counter products that they used that killed them. Saying, “Hey, look. My son bought this at Lowe’s and it killed him.” I can’t help but think a weak privileged elitist like Scott Pruitt saw the reality where the rubber meets the road. I thought, “Well, maybe he’s actually got a conscious.” But no.

Mike Papantonio: There’s more to this. Okay. The companies that make this product. First of all, they knew was killing people. They allowed it to happen anyway. We don’t expect much from corporate America, but this has been for decades that these corporations, this corporation has known this product will kill people. Not just immediately but it’s a late defect of cancer and neurological disease. They’ve known it forever. They never really warned. They never fully warned. They mentioned cancer. They never mentioned neurological disease.

Mollye Barrows: You could die suddenly. It can suck the oxygen out of your brain and stop your heart. Oops, we didn’t mention that.

Mike Papantonio: Yeah, which is kind of the corporate way in America right now.

Mollye Barrows: We’ll see if he actually does it. All he said was, “Well, the EPA is indicated that we will uphold this ban.”

Mike Papantonio: He doesn’t mind if the planet burns up from climate change. He’s doing everything he can to stop any advancement on the issue of climate change and so many other things.

Mollye Barrows: Right. We’ll see if he actually does this.

Mike Papantonio: Yeah. The guy is a train wreck. Thank you for joining me.