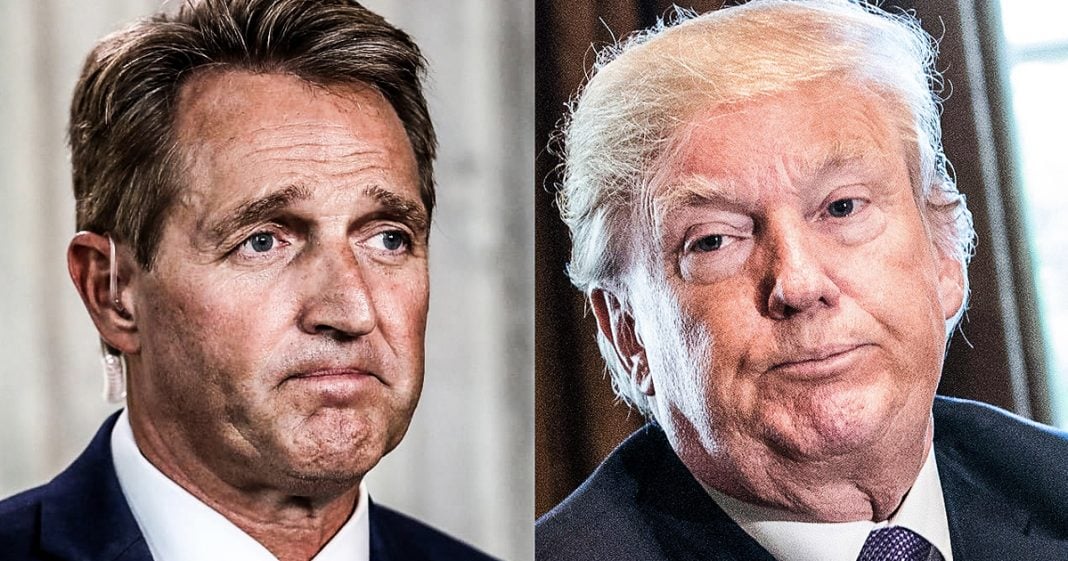 Republican Senator Jeff Flake has been the absolute loudest voice of opposition to Donald Trump on the Republican side, and he’s even found himself the target of Trump’s rage on Twitter more times than we’d care to count. But all of his opposition is a farce, as he announced this week that no matter who Donald Trump picks to replace Anthony Kennedy on the Supreme Court, he’ll support that person. Flake rolled over just as most of us expected him to do. Ring of Fire’s Farron Cousins discusses this.

Republican Senator Jeff Flake has absolutely been the loudest anti-Trump voice among Republicans in Washington DC. This week when it was announced that Anthony Kennedy was retiring from the Supreme Court, Trump was gonna get a second pick, it would seem obvious that a guy like Jeff Flake would stand up and say, “I’m not gonna support this mad man, our president because I’ve been against him every step of the way. Remember public I’m with you.” Well, that’s not at all what happened. In fact, Jeff Flake the Never Trump Republican actually admitted that no matter who Trump puts up he is going to blindly support their nomination and confirmation to the United States Supreme Court. It doesn’t matter who. Jeff Flake actually said that, “Whoever Trump puts up I’m going to support them.” Trump could nominate a pineapple and Jeff Flake would be like, okay I’ll do it, whatever. I’m an idiot.

Here’s the thing folks, we have to stop thinking that any of these Republicans are actually anti-Trump. John McCain whose been a loud voice against the Trump policies has voted with them over 90% of the time, supported more than 90% of what Donald Trump has done. Yet, he’s a Trump fighter? He’s bucking the system? No, he’s not. Jeff Flake isn’t either. These guys are all talk because they’re trying to curry some political favor. I don’t know why they think it’s gonna help them because neither of them are going to run for office again, but they do it because the media buys into it. It gets them a little publicity. Maybe it helps them in post political careers. Same thing with Susan Collins and Lisa Murkowski.

Can we stop pretending like there are actually anti-Trump Republicans out there because there’s not? Because when pen comes to paper, and they got to vote, when they have to go and push that button on what to vote, yes or no, on one of Trump’s nominees, they’re all voting yes. When it comes to the policies of the Trump Administration they’re all voting yes. Yeah, John McCain got it right one time. Wow. Who gives a crap, right? We have to stop pretending like any of these people have a conscious, like any of them have a moral compass because they all support the same policies. They just may not always be happy with the wrapper that it comes in, which is the package of Donald Trump. Yeah, it’s ugly, it’s abrasive, and it’s horrid, but they love what’s underneath because they’re filled with the same kind of hate and rage and disgusting contempt for American life that Donald Trump is filled with.

Let’s stop pretending that Jeff Flake is on our side. Let’s stop pretending that people like Flake, and McCain, and Collins, and Murkowski are out there fighting back against Trump. They are fighting for the same policies that Donald Trump wants to implement. They are no different other than the fact that they may not be as abrasive and bullish as Trump himself is, but if you took that away from Donald Trump it would be like these people looking in a mirror and seeing themselves because they’re no different.