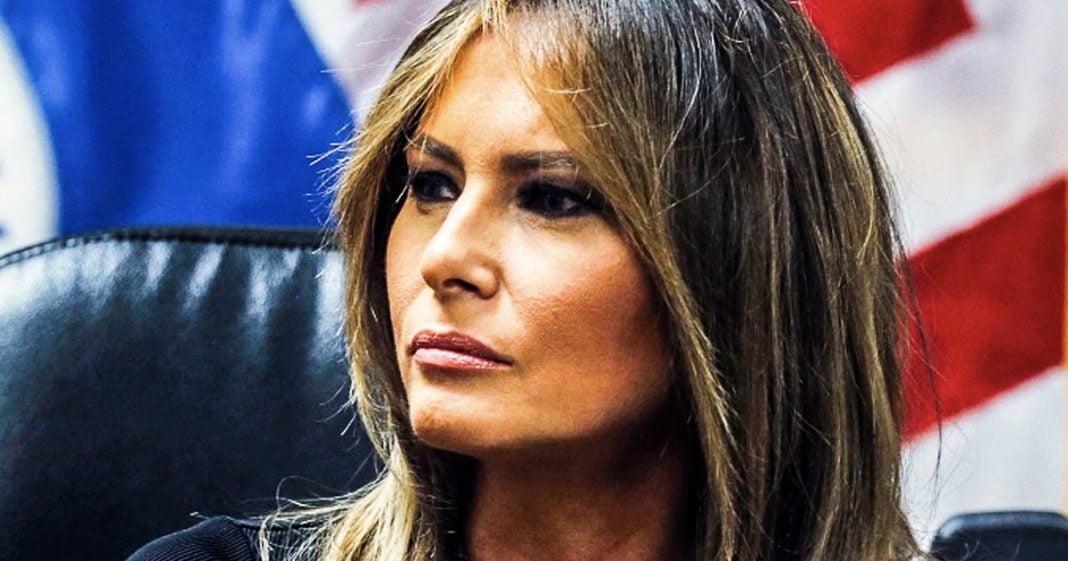 For the second time in as many weeks, Melania Trump visited a child detention center to “visit” migrant children that had been separated from their families. But instead of offering her aid and support to the terrified children, she instead praised the border agents who callously locked them up and lost track of their parents. Ring of Fire’s Farron Cousins discusses this.

For the second time in as many weeks, Melania Trump headed back down to the border to go visit another child prison. But, don’t worry. This time she was not wearing a jacket that said, “I don’t really care. Do you?” She was dressed nicely because, as usual, she pays attention to what she wears. Which is why the whole jacket thing seems odd, because there’s no way she didn’t what kind of message she was sending.

Nonetheless, the woman heads back down to the border, meets in a child prison, and what everybody thought would happen was that she was going to talk about how we’ve got to get these children back with their parents, right? We’ve got to help them, we’ve got to reunite them and then figure out what to do from there. But, no. Instead, Melania Trump … And the video of this is in the description of this video, so if you can stomach it, you can watch it. But if not, let me just give you the highlights.

She did say, about these kids coming over illegally with their parents, “There have to be consequences.” That’s a pretty harsh statement to make when children are a few feet away from you in cages, don’t you think, Melania? But it gets worse than that. She also said the following: “I’m here to support you.” Oh, hey. She’s here to support the kids, right? “And to give my help, whatever I can, for behalf of children and families.”

Well, hold up. You can’t help them on behalf of them, so who were you talking to? Well, it’s clarified in her next sentence here. “I know how dangerous and difficult your daily jobs are, so I really appreciate all you do on behalf of the country.” So that support that she was offering, that praise, that wasn’t to the children who don’t know where their parents are, or even if their parents are still alive. It was to the Border Patrol agents that are forcibly separating children from their parents.

So Melania Trump, a woman who may have actually come to this country illegally and overstayed her visa but somehow lucked out because she’s not a black or brown child, was allowed to stay along with her parents. She goes down there and has the audacity to basically spit in the faces of these kids, by telling the people who have ruined their lives, “I’m here to support you.” Not you. Get back in your cage, little one. I don’t give a shit. And that’s what Melania is saying, basically. That’s her attitude about this. “I don’t give a shit.”

That’s the kind of First Lady we have, right? Don’t you miss the days when the biggest scandal of the First Lady of the United States was that she wore a sleeveless dress one time, and we could see her arms? You know, I would love to go back to that. Instead of this heartless, evil woman. Because that’s what she is. She is pure, friggin’ evil, going down to the border for the second time and refusing to offer any help to these kids. Refusing to comfort them.

She is a mother, and she doesn’t even have it in her to show compassion or empathy for other children. It makes me wonder about how horrible Barron is going to be when he grows up, because if she doesn’t have it for other children, the likelihood of her having it for her own children is almost non-existent. So, there’s no telling how screwed up that kid is now, but he’s not the problem right now. The problem is that we’ve got over 2000 kids who have been separated from their parents, and an administration that not only doesn’t have a plan to reunite them, but doesn’t even care that they’ve done this.