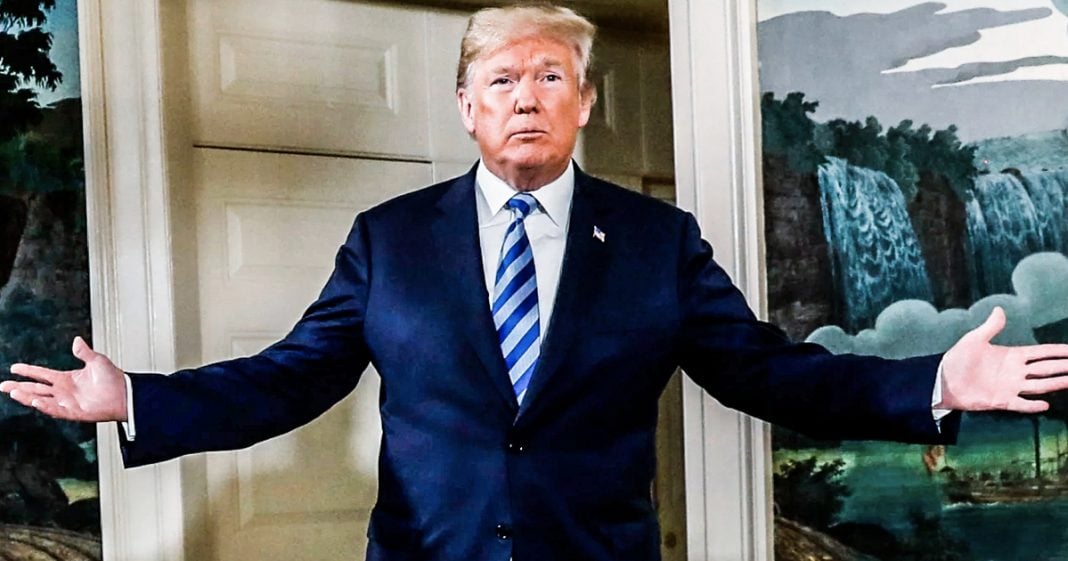 According to the Trump administration, the number of people living in extreme poverty in the United States is so low that it statistically doesn’t even exist. This claim came about from a recent UN report showing that more than 18 million US citizens are languishing in extreme poverty, but now the government is simply saying that these people don’t actually exist. Ring of Fire’s Farron Cousins discusses this.

Right now the United States is basically in a massive argument with the United Nations, not only about the fact that we’re rounding up children from immigrants and throwing them in baby jails, but also because of the fact that we are doing absolutely nothing about the eighteen and a half million Americans who live in what is described as extreme poverty in this country.

So last Friday the administration fought back and they told the UN Human Rights Council that extreme poverty actually doesn’t exist in the United States at all. That’s what they said. They said that less than 250,000 people in the US are living in extreme poverty, which would be .08%, which statistically would mean it does not exist. The Trump administration is trying to act like there are not eighteen and a half million people in this country living in extreme poverty, unsure of how they’re going to survive from day to day.

Now the UN based their numbers on income, on census data. You know, things that actually matter. The Trump administration got their 250,000 person number from the conservative think tank, The Heritage Foundation, and where did The Heritage Foundation get it? Well, basically they made it up. They took estimates of how many people they think are living on less than $4 per day in this country and they came up with 250,000. That’s literally the math that they used. There were no hard statistics. There was no hard data. They just kind of guessed and made up an arbitrary number, $4 a day, as extreme poverty, and a quarter of a million, end of the discussion.

So that’s what the Trump administration actually went to the UN and told them. They said UN, you are lying about eighteen and a half million. Our number right here that I just wrote on a piece of paper says 250,000.

That’s not how it works. But more importantly, it shows that this administration, one, is not taking the issue of extreme poverty seriously and, two, doesn’t give a damn about the people that put them in power. Because if you look at maps, you look at where this extreme poverty is, the worst state in the country is Alabama, you know, all of those hard-core liberals in Alabama, right? No. Those are Trump supporters. The rest of them are in that so-called fly over country, the mid-west, who also happen to be Trump supporters and Republicans.

Donald Trump is denying that these people even exist, and yet they somehow think that they, the forgotten majority they call themselves, are being protected by Donald Trump, that he’s going to take care of them, that he cares about them. I mean do you people understand he literally had his people go to the UN and say that you don’t exist? You think he’s got a plan to fix things? You think he’s got an idea to make the economy any better or your lives any better? Because he doesn’t.

He wants you to not exist, and I’m not just talking about on paper. He wishes people like you weren’t in this country. He would never associate with someone of your status, and I don’t mean that to be offensive to you. I’ve been there, trust me. But people like Donald Trump don’t understand it. They don’t know what it’s like. They don’t know what it’s like to go to the grocery store and try to spend $8 but have your debit card declined. That has happened to me before. It’s happened to a lot of people in this country.

Donald Trump and most of the Republicans and some of the Democrats would rather pretend that we don’t exist as human beings. Why? Because it makes them look bad. It makes them look like they are failures when you put all the numbers down on the paper, the right numbers, not the one from The Heritage Foundation.

Because when you start looking at extreme poverty, you can’t not question what capitalism is doing to this country and how our non-stop quest for corporate profits and tax cuts is actually destroying the people that this government should be protecting more than anyone else.