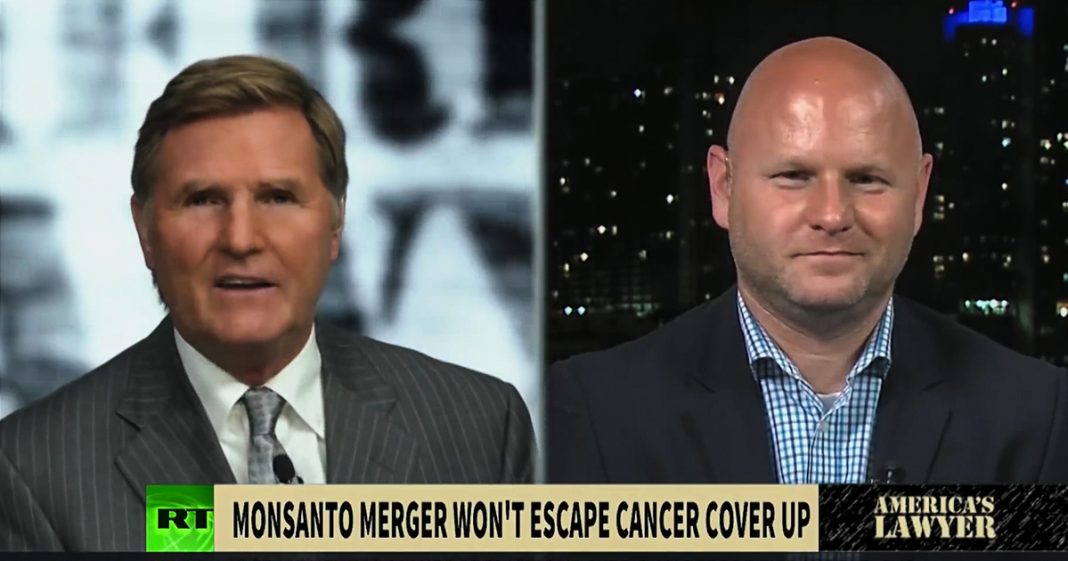 Via America’s Lawyer: Mike Papantonio and Farron Cousins talk about the Bayer-Monsanto merger and how that won’t help the company run away from countless lawsuits that say their products cause cancer.

Mike Papantonio: Media outlets were buzzing recently about the news that Bayer Corporation and Monsanto won approval for a mega-merger from the U.S. Department of Justice. No surprise there, but as usual, the corporate media ignored the disgusting histories of both these companies, and instead focused on the consolidation of power and what it means for investors.

What’s been ignored by these media outlets is the fact that Monsanto is currently facing a tidal wave of lawsuits over the dangers that have been associated with their blockbuster weed-killer Roundup. Recently, documents were released that showed just how far Monsanto went in their efforts to undermine the scientific evidence showing that their chemicals were causing cancer, clear as day. These documents paint a very clear picture of a corporate cover-up that rivals that of tobacco companies and the asbestos industry decades ago.

One of the biggest targets of this Monsanto cover-up was the International Agency for Research on Cancer. The group classified Roundup’s main ingredient, glyphosate, as a probable carcinogen. That happened several years ago. After that ruling, though, Monsanto’s executives put together an action plan to not only attack IARC but also get their spokespeople booked on media outlets to spread their propaganda.

Another line of attack the company engaged in involved hiring industry-friendly scientists to write phonied-up papers that ignore scientific evidence, and to tell us that glyphosate was almost safe enough to drink straight out of the bottle. They really did tell us that. Monsanto’s own documents tell the story that corporate media has ignored since day one, but it’s a story that’s about to be told in courtrooms all over this country.

Joining me to talk about this issue is Farron Cousins, executive editor of the Trial Lawyer magazine. Farron, let’s start with the Bayer-Monsanto merger. What’s going on? What’s this going to mean for consumers across the globe? What is your take on that?

Farron Cousins: It’s going to mean less choice for consumers all across the globe. I know Bayer says, “Hey, we’re going to sell off all of our seed business. We’re not going to create this consolidated consortium of seeds,” but they’re selling it all to one other company, BASF, that’s also joined at the hip with Bayer and Monsanto, because they’ve been helping to fund this GMO Answers program, which is out there to basically spread propaganda about GMOs and how they’re not tainted with things like Roundup. BASF gets all the seeds, so we don’t change the number of people that own most of the seeds throughout the planet. It really means nothing. Consumers are still going to have less choice. Bayer is going to have Monsanto, this agrochemical giant, and consumers are going to get the short end of the stick, as they always have, as they always do anytime there is a mega-corporate merger like this.

Mike Papantonio: Incredible to me is the media’s take. All they’re talking about is the numbers. It’s almost like they ignore the horrendous history of these two companies. Take both of those companies. They’re going to be in the top five or 10 internationally for being sued the most, for having the most fines, the most criminal events that have taken place. Monsanto and Bayer have this long, ugly history, but the corporate media, all they want to talk about, what does this mean for shareholders? Not, what does it mean for consumers that are affected by their products? How is this merger going to affect, for example, the litigation that’s coming up for Monsanto, or all the litigation that has existed for Bayer forever? How is this going to affect litigation?

Farron Cousins: On its face right now, this shouldn’t affect the litigation whatsoever, but if Bayer chooses to do what other companies have done in similar situations, it could. First and foremost, when you buy a company, when you absorb another company as Bayer is trying to do with Monsanto, you also absorb all of their liabilities. This includes any existing lawsuits, any future lawsuits. You own that now.

But, what we have seen companies do in the past, we’ve seen it all over the country, is that once they complete this merger, they may create a subsidiary or a spinoff company, and then put all of those liabilities into that particular company, and then have that company declare bankruptcy because they don’t ever fund it. They don’t give it money, and then suddenly when you’re facing billions of dollars in lawsuits for a company you just created yesterday, you have grounds to go to the government and say, “Oh, look. Look at all these lawsuits this little company has. They’re going to have to file for bankruptcy. That may affect whether or not all the people that have been killed along the way or gotten cancer along the way, that may affect their ability to get any kind of compensation for us poisoning them for decades.” Bayer may not do that, but we’ve seen it too many times.

Mike Papantonio: Let me be clear about that. There’s no question. Monsanto makes a product, Roundup, that causes cancer. The only question is what other diseases does it cause. Now, we saw DuPont and Dow, they made this merger. They put together this merger, but DuPont … Here’s where it really gets interesting. DuPont, after they left putrid toxic waste all over the planet, literally all over the planet from China to California, after they left their toxic waste everywhere, they then said, “We’re going to start another company, and we’re going to give them all of our liabilities.” They want to give them $300 million to cover all, which is not even a close call. They funded this company for one purpose, and that is so that company could say, “Well, we’re really not DuPont that caused all this mass toxic waste to be spread out all over the place. We’re a different company, and we have to declare bankruptcy because we don’t have enough money to pay for all the death and destruction that DuPont left along the way.”

That’s what we see happening here, if I hear you right. That would be my call exactly. We know from the documents, Farron, that Monsanto’s goal was to attack any science that was bad for Roundup. What prompted these attacks? How did all this begin where they phony up all this science? It’s fantasy, just fantasy talk. How did we get here with that?

Farron Cousins: This is something that Monsanto has been engaging in since at least the 1990s, possibly earlier, any time you have any kind of federal or international agency that comes out and says, “Hey, glyphosate in your Roundup is likely a human carcinogen.” The EPA did it in the ’90s. Monsanto fires back. They unleash their lobbyists. They unleash their gaggle of corporate-paid scientists to say, “No, no, no. You got it wrong.” The EPA backed off.

In 2015, IARC, as you had already pointed out, came forward, and they said, “Listen, based on everything we have seen, and we have all this science from around the globe, your Roundup glyphosate is a probable human carcinogen.” Monsanto, obviously you can’t go and lobby IARC to take away this classification like they did the EPA. You can’t pay off politicians or scientists to argue with the IARC.

So, they went a different route this time. This time, they wanted to go the public relations route. They wanted to go out there and attack IARC, say that this was a political ploy by this non-political agency. They had their trolls out online, attacking anybody who wrote a blog post about Monsanto and Roundup, anybody who did an interview on it, which was rare considering that the corporate media doesn’t want to talk about this issue that’s been going on for several decades now. Monsanto was really prompted by IARC, and they just upped their game to a new level because they had nobody left to pay off.

Mike Papantonio: By the way, IARC is part of the World Health Organization. This isn’t some mom and pop operation. They looked at all the signs. They said, “Yeah, it causes cancer.” The only question is, does it cause neurological diseases? Plenty of scientists say it does. It causes birth defects. Plenty of scientists say it does, but they’re able to go out and hire these bottom-feeder scientists, these bottom-feeder professors that work at some of the best colleges in the country. The bottom-feeder scientist says, “I’m not being paid enough working as a professor. Give me that $300,000. As a matter of fact, you write the report, and I’ll sign it for you.” That’s how bad it is. Tell us about this group AgBioChatter that’s now surfacing. We’re seeing this thing about AgBioChatter. Why is Monsanto … How are they using it? How is DuPont, Dow Chemical, how are these big companies using AgBioChatter?

Farron Cousins: This was actually uncovered in a Monsanto document written on February 23rd of 2015. They want to use this group, this AgBioChatter. It is a listserv. Basically, it’s a massive email list of all kinds of academics, members of the media, and PR firms. What they do is they send out a message, let everybody know either one of two things. One, we wrote this paper saying that glyphosate is as safe as rainwater. Who wants to sign off on it? Let us know who the highest bidder is. Or two, they will go out there and say, “Listen, we need scientists to go out there and do an interview, and go out there in the media, and say that no, no, no, IARC got it wrong. The independent studies were also wrong. Everybody’s wrong except Monsanto. They got it right.”

They have this database of scientists, and PR firms, and everyone else who is willing to go out there and be a paid spokesman for these corporations when, in reality, they’re supposed to be impartial academics. They are respected in their fields. They’re respected at their universities, but they sell it all to go out there and get some of that sweet Monsanto or DuPont money.

Mike Papantonio: Farron, there’s this great video that’s on … You ought to go see it. It’s on YouTube, where one of the scientists is confronted with a journalist. A real journalist, unlike our corporate journalists in the United States. A real journalist confronts this corporate type that’s out selling the idea that this is safe, it’s safe enough to drink. The journalist says, “Really? It’s safe enough to drink? Well, we just happen to have some for you back here. Do you mind drinking it?” The guy says, “I’m not an idiot. I’m not going to drink that.” Minute one, he’s saying, “Safe enough to drink.” The journalist says, “Well, okay. Let’s see it on the air.” Guy gets up and he walks out of there. This is one of those AgBioChatter kind of what we call key opinion leaders that these companies actually go out and hire.

I’ve got to tell you, the corporate media has been completely silent about this. They’re going to remain silent. The advertising dollars are just too big for them. Farron, thanks for joining me. Stay on this story. It’s an important one.