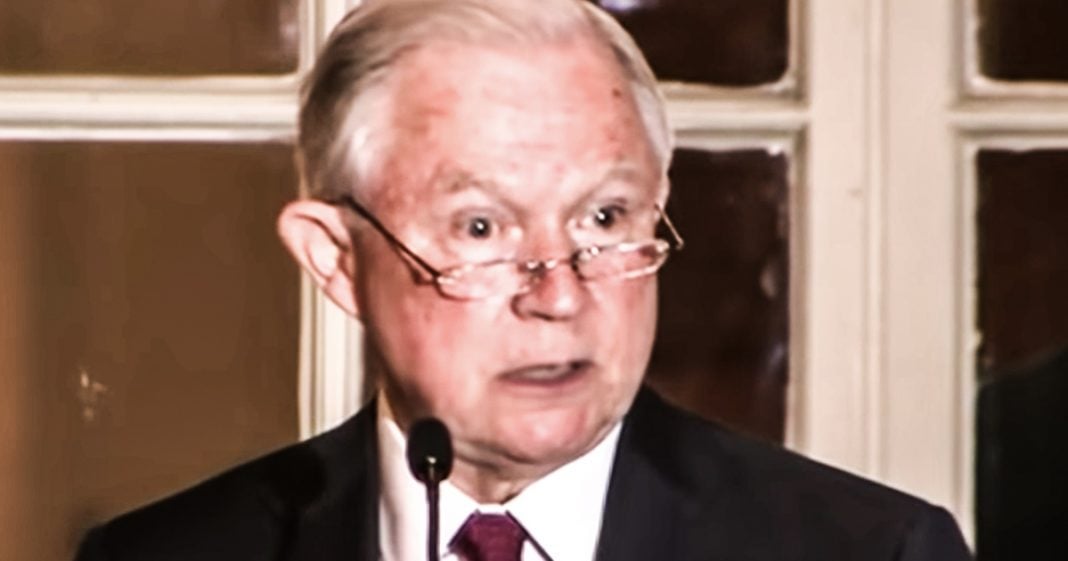 During a speech this week to a conservative legal association, Jeff Sessions made a joke about separating children from their parents while the crowd laughed. These people have no sense of decency whatsoever, and they mock the pain and suffering of the people who are having their lives ruined. Ring of Fire’s Farron Cousins discusses this.

Farron Cousins:
This week, Attorney General Jeff Sessions gave a speech in Los Angeles at the Criminal Justice Legal Foundation, a right wing legal group, where he actually made a joke about separating children from their parents. Take a look. The crowd absolutely loved it, but just watch this clip of Jeff Sessions, during his speech.

Jeff Sessions:
The rhetoric we hear from the other side on this issue, as on many others, has become radicalized. We hear views on television today that are on the lunatic fringe, frankly. What is, perhaps, more galling is the hypocrisy. These same people live in gated communities, many of them, and are featured at events where you have to have an ID to even come in and hear them speak. They like a little security themselves, and if you try to scale the fence, believe me, they’ll be even too happy to have you arrested and separated from your children. [I bet, inaudible 00:01:03] we’d like to see that.

They want borders in their lives, but not in yours, and not in the American people’s lives. That’s why the American people are sick of the lip service and the hypocrisy. They are sick of politicians who abandon promises as soon as the mainstream media criticizes them. They’ve seen it for decades, and now they’re supporting the President, who’s on their side for a change.

Now, before I get into his joke, I have to point something out here. When you listen to Jeff Sessions in that clip, when you watch him struggle to speak, the man looks like he is in the middle of having a stroke. He is looking at a piece of paper and cannot pronounce the words on it correctly.

I’m not saying that to make fun of him. That is a sign of something not being right in his head, perhaps medical, perhaps mental, but something was not right with Jeff Sessions there. That is not how he normally acts, especially when attempting to read off of a piece of paper. Jeff, go get yourself checked out, because something’s not right. That really seemed like you were having a bit of a mini-stroke right there.

Now, to your heartless, horrible, piece of crap joke. You think it’s funny to make jokes about separating children? I understand your point there, like, oh, Democrats don’t care if average people go to prison and get separated from their families. Oh, you mean people that go out there and commit actual crimes? Not people who commit a misdemeanor by crossing a border or coming here seeking asylum, which is 100% legal, but it’s a program that you ended? No, there’s nothing funny about that, and that is a false equivalency, sir, but I wouldn’t expect you to understand that, since you are grossly unqualified to hold the job that you currently hold.

The bottom line is that you, and the rest of the people in this administration, have no soul. You have no moral compass, and you are, for all intents and purposes, an incredibly racist and despicable and deplorable human being. That is what history is going to remember you as, Mr. Sessions.