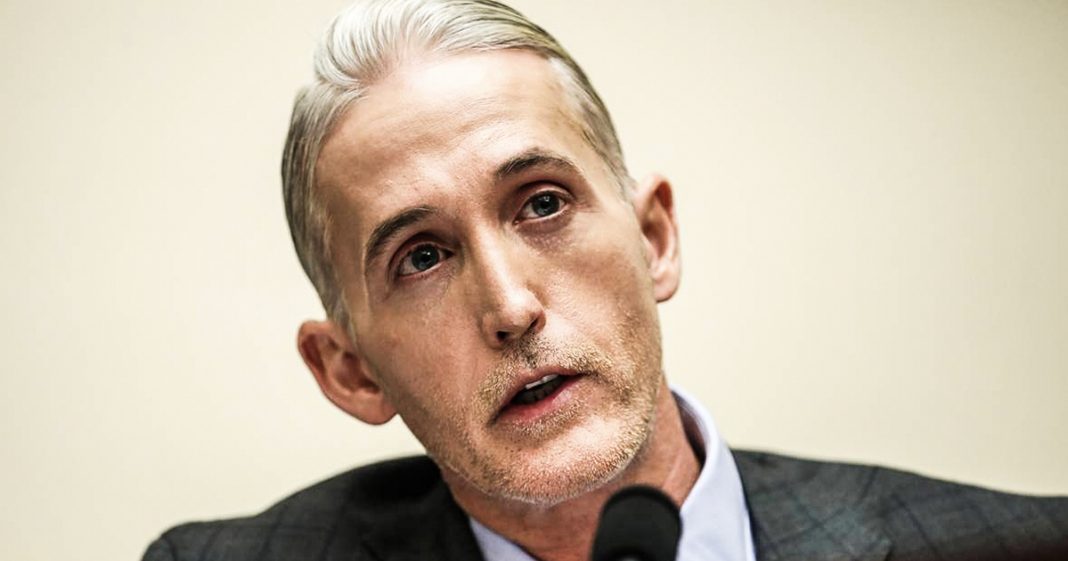 During a congressional hearing on Thursday, Republican Representative Trey Gowdy blew his cork over the fact that the Mueller investigation is still going on after just 13 months, and he told Deputy Attorney General Rod Rosenstein and FBI Director Christopher Wray to “finish it the hell up.” Ironic coming from a man who spent nearly 3 years investigating a fake Benghazi scandal to score political points with his base. Ring of Fire’s Farron Cousins discusses this.

On Thursday of this week, Deputy Attorney General Rod Rosenstein and FBI Director Christopher Wray were called to testify before Congress, because the Republicans there wanted some answers about that recently released Inspector General report which actually said that the investigations into Trump were not politically motivated. But that wasn’t good enough for Republicans, so they held this emergency hearing as what it was called to get some answers about, I guess, why it wasn’t politically motivated.

Trey Gowdy: We’ve seen the bias. We’ve seen the bias. We need to see the evidence. If you have evidence of wrongdoing by any member of the Trump campaign, present it to the damn grand jury. If you have evidence that this president acted inappropriately, present it to the American people. There’s an old saying that justice delayed is justice denied. I think right now all of us are being denied. Whatever you got, finish it the hell up because this country is being torn apart.

See to me, the Trey Gowdy outburst right there is far more important than anything that Jim Jordan did, and here’s why. First and foremost, Trey Gowdy is pissed off that this investigation has been going on for 13 months. Can you imagine? 13 months. Even though we’ve had five indictments or guilty plea, excuse me, two people currently in jail, many more subpoenas and indictments handed out here, but yeah, yeah, yeah, totally 13 months is way too long. Even though Gowdy himself is the one who dragged out the Benghazi hearing farce for nearly three years.

Hillary Clinton sat in public testimony for 11 hours, answered every question they had, and they still couldn’t come up with anything to pop her on. Trey Gowdy was the man responsible for that, but now he’s pissed off that this thing has taken 13 months. “Finish it the hell up, and get on out.” Well, here’s the thing Gowdy, and I hate to have to remind you about your own life, but I do. Because not just the Benghazi thing that you drag on for almost three years, but the fact that I think it was about two, three weeks ago maybe, you, you personally along with several of your colleagues who were actually in that hearing on Thursday met with these same people you were talking to behind closed doors in D.C. and they explained to you everything that they had to start the investigation. They talked about some of the things that they found, and you left that meeting saying that this investigation into Donald Trump was not politically motivated and that it was fully justified.

Now, suddenly, now that all of your buddies are around and this is being shown on C-SPAN and other networks running clips of it, suddenly you’re like, “You need to hurry it up. This is ridiculous. I can’t do this anymore.” Which is it? Were you lying when you left the private meeting with these men, or were you lying to the public in order to gain a little bit more political favor? Because we already know what you said about this investigation. We know that you believe in it that it was not politically motivated and that it is fully justified. Yet, here you are just a few weeks later saying that they need to “finish it the hell up.”

Let me tell you some Gowdy, it’s going to finish when it finishes. It’s going to finish when the special prosecutor has all of the indictments and all of the pleas and all of the interviews that he needs. If you wanted to finish the hell up, how about you walk over to the White House and convince Donald Trump to go sit down for an interview with Robert Mueller, because I promise you, that would help speed things along more than anything else that you can possibly do.