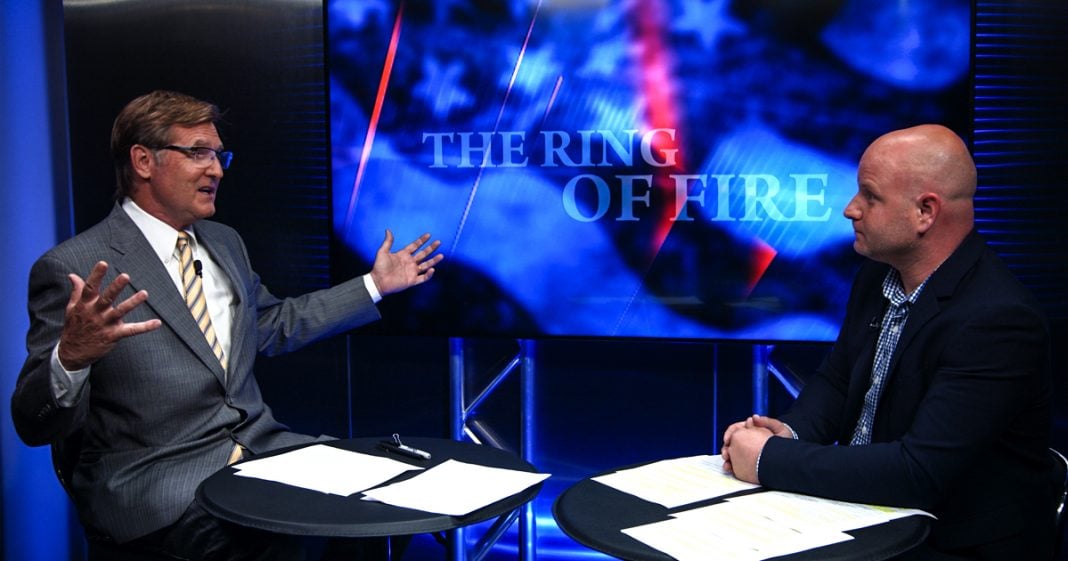 Scott Pruitt and the EPA are being sued for ignoring Air Pollution standards, and this lawsuit could force the agency to stop destroying our air. Ring of Fire’s Mike Papantonio and Farron Cousins discuss this.

Mike Papantonio: Scott Pruitt and the EPA are being sued for ignoring air pollution standards and this lawsuit could force the agency to stop destroying our air. Or at least save what we can. Look, it’s another Pruitt story.

Farron Cousins: Except it’s one that matters.

Mike Papantonio: It’s one that really does matter.

Mike Papantonio: This is important. Well, I think all of the Pruitt stories matter. Even the Pruitt story where we learned that the lobbyist were letting him live for a fraction of what they should be charging for the condo that he was living in, and then we find out, oh, by the way, Pruitt has been approached and actually has done some of the things that these lobbyists have asked him to do. Pruitt is a thug. He’s just absolutely a thug. But here we’ve got a good lawsuit because it’s in the form of a writ of mandamus. He’s being ordered to do what he knows he’s supposed to do and his failure to do that, it makes it into a viable lawsuit. These kinds of cases have become very effective lately. This complaint was filed in Northern District of California.

So, that’s what this lawsuit centers around. Farron?

Farron Cousins: Yeah. You know, back during the Bush years, the US Supreme Court, because the EPA back then had been sued because they were not enacting anything from the Clean Air Act, which is exactly what Scott Pruitt is basically being accused of here, and the US Supreme Court at the time, controlled by Conservatives, said, “Hey, you have to do this, EPA. You cannot not do your job.”

Mike Papantonio: Last week, we have another story, and he wants to cover up … Interesting point. This is such a crazy story. Pruitt comes out and says, “I have proof. I have it right here in my back pocket. I got proof that shows unequivocally that there’s no such thing as climate change. He sued and he says, “Listen, you want to show us this because everything we’re looking at, it shows just the opposite.” He says, “Well, I don’t really want to hand it over,” because why? Because he doesn’t have it. Because he was lying about it.

But, again, it was an environment group that said, “We got to do what we got to do. He said this to the American public. This is what he is basing his entire administration on. So, Scott, how about showing us this material?” He says, “Ah, I don’t want to do that,” because he doesn’t have it.

Farron Cousins: Well, I’ll tell you, look, the entire time we’ve been doing Ring of Fire here, I honestly can say I don’t know that I have ever seen any government official or any at least department head that we have ever had to cover that is as scandalous and corrupt and incompetent as Scott Pruitt.

Mike Papantonio: How long does he stay? Give me your take. What does it take for Trump to say, “This guy is such a cancer.” Trump’s got so many cancers on his administration, but this guy stands out, is like a big old tumor right on Trump’s forehead. At what time does he say, “You know, I got to get rid of him.”

Farron Cousins: Never. He never says it. Scott Pruitt is doing everything that the entire Republican party has always wanted. As long as he keeps delivering, repealing these regulations, not enforcing the rules, it doesn’t matter how many other little distractions he has.

Mike Papantonio: Okay, let me point something out. This doesn’t have anything to do with rank and file voters. You understand?

Mike Papantonio: In other words, sometimes a Republican says, “I got to do these crazy things because my base is crazy and I want my crazy people to vote for me.” Because it’s something that’s broad. It might be something like guns, it could be something like immigration. It’s a broader issue. This is not a broad issue because the average person out there doesn’t understand even what’s happening here. This is a corporate issue. This is the Republicans delivering to their corporate pals, saying, “You sent a gazillion dollars. We’re going to give this to you. Here it is.” Don’t you see that? That is the difference in this story, in most Scott Pruitt stories.

Farron Cousins: Yeah. Look, any one of the things that Scott Pruitt has done would have gotten anybody else from even the Bush administration kicked out of office.

Mike Papantonio: Yeah. They would have been gone.

Mike Papantonio: In Las Vegas, this shooting survivors are filing a lawsuit alleging that the venue, the hotels, and the security didn’t do enough to protect concert goers on the evening of the shooting. Actually, as you know, we’ve interviewed these folks, a few of the lawyers that are handling these cases. The stories that we’re hearing are remarkable. This case is one that wins, all day long. There may be some people that don’t qualify because maybe their injuries aren’t severe enough. There are laws that say if you’re within a … They call it the zone of impact. Zone of impact is you’re 10 yards from where somebody falls dead from being shot, from what occurred here. They die in front of you. Then because of that, there’s all types of emotional types of recovery that you can make because of that.

What we’re going to find is that you’ve got … There’s left, what, 546 people injured, 58 dead, and as this case makes its way through the system, it’s going to make some new law. The law is going to be how far away from that zone of impact can you be? If you’re on the other side of the field when the shooting took place, do you qualify to be able to recover anything? What’s your take on this case as it’s filed, as you’re reviewing what happening? What’s your take on this case?

Farron Cousins: I think a real winner here and I think that people need to really understand what happened, the failures of this. It’s not just people saying, “Oh, I was near somebody, they got shot, I want to sue.” Especially MGM Resorts, that owned the Mandalay Bay where this guy was shooting, were letting this guy come up and down the service elevator with his big bags of guns because he was a high roller with them, so they didn’t want to make any waves, they didn’t want to ask what was in his bags.

Mike Papantonio: And he was passing out money.

Farron Cousins: Right. So, he was allowed to do whatever he wanted, locked in his room for I don’t even know how many days, but they didn’t check on him even though he had the “Do Not Disturb” thing for days, and days, and days, which the rules for that have already been changed.

Farron Cousins: They knew something wasn’t right, but they didn’t want to touch him because of all the money he was spreading around.

Mike Papantonio: Yeah. It was all about money. We’re going to report on this some more as the case develops. But this is going to be a teaching moment in this area.