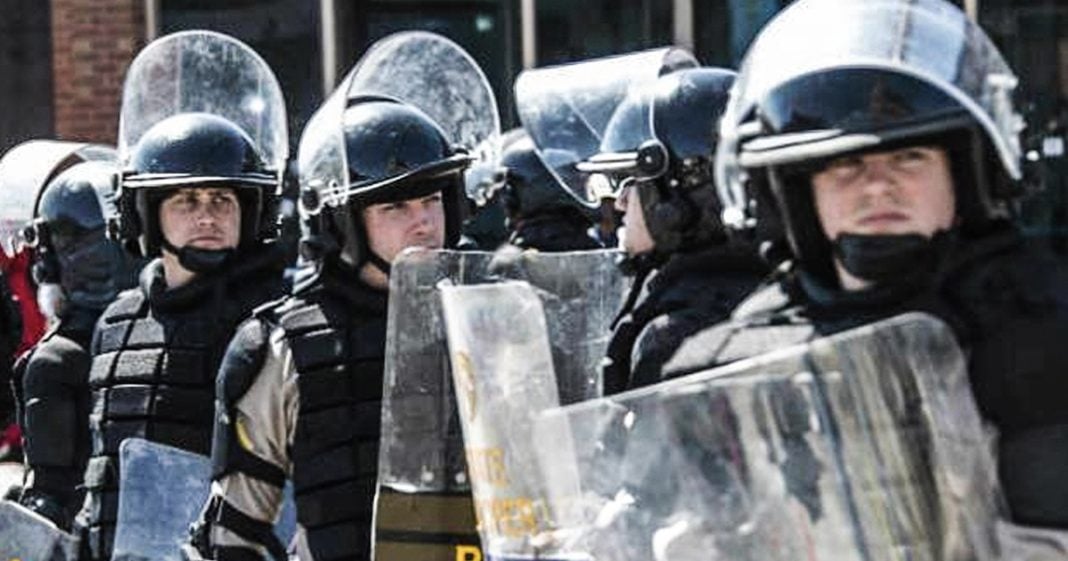 Police in riot gear were called to forcibly remove a group of non-violent protesters at an ICE facility in Portland, Oregon this week, showing just how little our First Amendment rights actually matter in today’s political climate. This is a violation of basic civil rights, which is ironic considering that the protests were about the violation of basic human rights. Ring of Fire’s Farron Cousins discusses this.

On Thursday of this week, protesters in Portland, Oregon, showed up at an ICE facility in order to protest the Trump Administration’s policy of separating immigrant families as well as to raise attention to the fact that 2300 of these separated children … The government has no plan on how to reunite them with their parents. So protesters showed up.

And shortly after protesters showed up at this facility in Portland, riot police were called. Full riot gear. Shields, batons, helmets, the whole nine yards to deal with these non-violent protesters.

Here’s the great irony of what happened in Portland with these protesters, which I think five or six people were actually arrested and put in jail because of this. They were there to protest the gross human rights abuses being committed by our federal government, and instead of being able to protest human rights abuses, they themselves had their constitutional rights violated by being told they have to leave. By forcibly being removed, and, some of them, by being thrown in jail.

Those people, those protesters, had a first amendment right to be there, and protest, and raise attention about what is happening, but the government didn’t want them to do it, so they immediately … I mean, these people weren’t there for too long at all before the riot police showed up, as if they were expecting all out warfare between the peaceful protesters and the police force.

But that’s what we’ve come to as a country here. We know that the Trump Administration absolutely hates protesters. We know that several states around the country have actually passed laws to make it easier for people to hit protesters with their cars and not face any kind of legal consequences for murdering people, and that’s what we’ve come to. We do not want to let people have their first amendment rights anymore.

The administration constantly is attacking the freedom of the press. Now they’re attacking our right to peacefully assemble. What’s next, folks?

You know, I love how all these right-wingers are out there talking about the infringement on the second amendment, while ignoring the fact that virtually all our other constitutional protections are being eroded while no one’s actually touching the second amendment whatsoever.

This is absolute absurdity. This is police state type stuff we’re seeing. What happened in Portland is what brutal dictators do to shut down dissent in their own countries, except now, we’re not talking about something that’s happening overseas. We’re not talking about people protesting the separation of families in a Middle Eastern country, or an Asian country that we’ve never heard of. It’s happening in our own backyards, and the administration is not tolerating people trying to exercise their first amendment rights in order to bring light to the first amendment rights abuses taking place on our own soil.