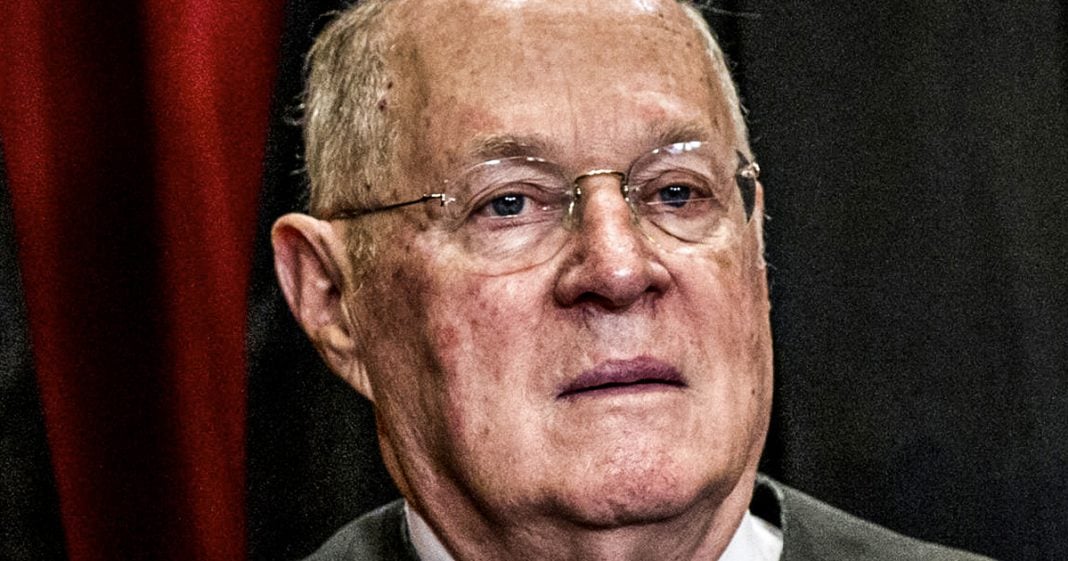 With Supreme Court Justice Anthony Kennedy announcing his retirement, Democrats have been given one last opportunity to prove that they are going to stand up for the American public and not allow a vote on a nominee until after this year’s elections. Mitch McConnell set the precedent for that, so Democrats need to follow his example if they want the public to support them. Ring of Fire’s Farron Cousins discusses this.

So on Wednesday it was announced that Supreme Court Justice, Anthony Kennedy was going to be retiring. Kennedy, appointed by Ronald Reagan, has always been seen as a bit of a moderate, the swing vote. Maybe he’ll go republican, maybe he’ll go liberal, although the vast majority of the time he always goes conservative.

So anyway, this guy’s leaving, which is gonna give Donald Trump the opportunity to appoint a new lifetime justice on the US Supreme Court, which will effectively remake the court for an entire generation. And between the liberal and democrats fitting on Twitter about whether or not this is Bernie’s fault, or Susan Sarandon fault, or Jill Stein’s fault, what they should be doing, and actually most of them are. It’s just the whiners that our there blaming Susan Sarandon for Trump getting two Supreme Court picks, which is ridiculous.

But anyways, most of the are out there urging the democrats, begging them to fight back. Do not let Mitch McConnell, who held up a Supreme Court appointment for a year, do not let him bring any nominee that Trump puts forward to a vote. Stand up to him and do exactly to him what he did to you. Mitch McConnell effectively stole a Supreme Court vacancy from Barack Obama, because he said, this is according to McConnell, “A president should be allowed to appoint somebody during an election year, because the American public’s about to make an important decision, and so after they make their decision we should make ours. That only seems fair,” according to McConnell.”

Well, in case Mitch McConnell didn’t realize this, 2018 also happens to be an election year. So I think, along with most other democrats, that we should probably wait until after this year’s midterm elections to bring anyone to the floor for a vote for that vacancy.

Here’s the problem. Democrats, some of them have already signaled that they’re not gonna obstruct a vote until they see who Trump is going to put forward. Well let me go ahead and give you an idea of who Donald Trump is gonna put forward. The name, the face, the gender, the religion, none of that matters of the person that he’s about to nominate because they’re all gonna fall into the same category.

That is what the next nominee will be. It doesn’t matter what their name’s gonna be. It doesn’t matter who it will be. They will all, anybody that Trump is considering, fit that exact mold. And that is why this is so dangerous. If Trump gets two Supreme Court picks within his first two years in office, again, this is gonna remake the court of the decade.

So now, democrats are being given a very rare opportunity. A rare opportunity to show the American public that they actually have a little bit of fight in them. That they’re will to go to the mat with these republicans who did the same thing to them. That they’re will to stand up and understand that the public doesn’t want this done right now. That they do not want a man like Donald Trump, who is under multiple investigations, to be able to remake the Supreme Court. They understand that. They want obstruction at this point. And it’s up to those democrats to do what they’re voters, what they’re constituents, and what most people in this country want them to do. And if they fail not only is gonna cost them dearly in the midterms, but it will confirm everything that the anti-establishment, progressive left has been saying about these people ever since the 2016 primaries.