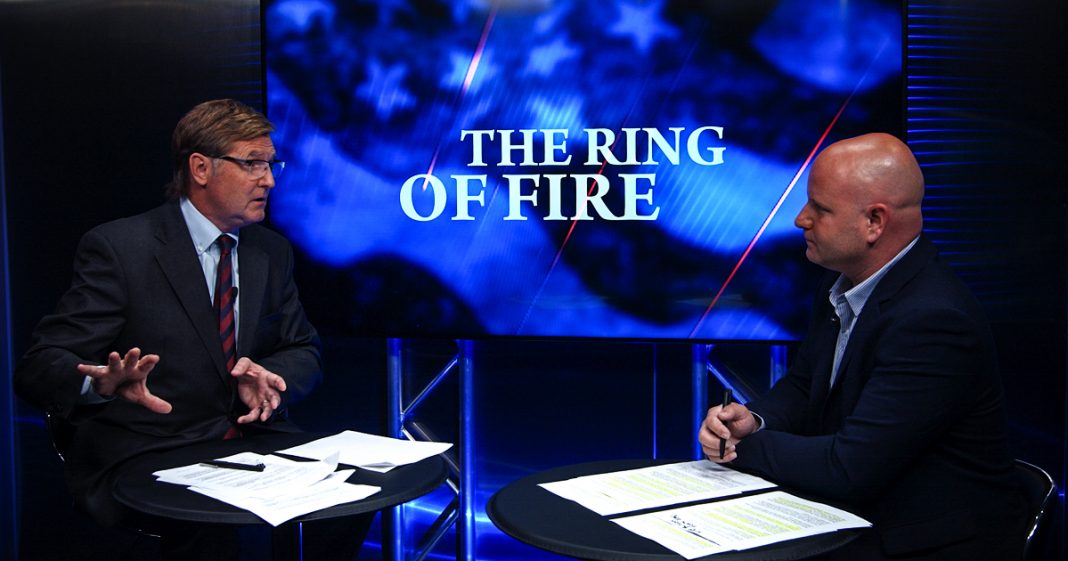 Defense contractors are cashing in with the administration’s horrible immigration policies, and these policies likely won’t change as long as there’s money to be made. Ring of Fire’s Mike Papantonio and Farron Cousins discuss this.

Mike Papantonio: Defense contractors are again cashing in with administration’s horrible immigration policies and these policies won’t likely change as long as there’s money to be made. Now this is a story to me, I looked at this story, it’s the contractors, just one contractor, MVM, is where this story focused. MVM is a contractor, they were a defense contractor, but now they’re saying, listen, we have this ability to handle all the problems with children crossing the border and then we have to be able to detain them, take care of them, make sure they eat right, have housing, and we’re the people that do that. Okay?

Now the interesting about it, what struck me about this story, it’s just another pigs at the trough for contractors. Okay. Pigs at the trough, what I mean is these people, I don’t know if you know this right now, there are more multi- multi million dollar homes around the Washington D.C. area right now than any time in history. You know who they are? They’re defense contractors. Okay? They made so much money in Iraq, in Afghanistan, they’re always looking for the next war. Okay? They’re the ones that were chumming up, yeah let’s go to war with Russia over Hillary’s election because it’s so important to us. We cared so much about Hillary, let’s go to war.

They’re the same people who are always making the big defense money. So now, what we have is now they’re making a transition. Every time you see something like this border issue come up, you’re gonna see these little characters coming out of Washington D.C. and saying, we’re perfectly suited to handle this kind of problem. How many times have we seen it? I mean, whether it’s a natural disaster, contractors come in besides FEMA, it is just money. It is pigs at the trough and that’s what we have happening on the border right now. Already.

Farron Cousins: It is and it’s a lot easier for these companies instead of having to go ship all their people over to Iraq or Afghanistan where MVM, this group you mentioned, they were doing plenty of work over there. They were working for the CIA, logistics, security, all kinds of vague terms for government contracts, which is what they all do. And so now they’re saying, hey, what we want to do is we want to take care of all these kids that you’re taking away from their parents when they cross the border. We’ve got tons of people, they know everything about kids.

Mike Papantonio: Have you ever done it before? No.

Farron Cousins: Yeah, I took care of my nephew one day, I know how to do this. And so they have been posting all of these job postings that they’ve uncovered here, that all deal with some kind of child care. They’re trying to hire people left and right, just all over the place, in anticipation of these contracts which they’ve now been awarded, I think a small one for about 8 million that’s gonna go through 2022.

Farron Cousins: So that shows you right there. There is no end in sight for this policy. It doesn’t matter who comes together, if you have Laura Bush and Obama and the Democrats saying this is horrible, it’s pretty much set in stone. We’re handing out contracts for the next four, six years.

Farron Cousins: To do this, it’s going to continue.

Mike Papantonio: All right, they’re using- this is a story we covered last week. Where we found out that during the Obama years that the level of abuse for these children was over the top.

Mike Papantonio: The ACLU came out with these reports and the level of abuse during the entire Obama administration was so bad that people, not only were they losing children, we did a story where they literally don’t know where 1500 children are. Remember?

Farron Cousins: Yeah, right. That’s from 2017, but the Obama era, they tased them, they beat them, they didn’t allow them showers.

Farron Cousins: That was starting in 2009, the year he took office.

Mike Papantonio: Yeah. Okay so these contractors now are using that type of thing to say, we really have a problem. We really care about these children. Yes, we’re used to working in a war environment, we worked in Afghanistan, we’ve worked in Iraq. How much money did they make in Iraq? Just the contractors? You did this story one time on it.

Farron Cousins: Yeah, 138 billion dollars is just what the defense contractors made in only Iraq. That’s not even Afghanistan.

Farron Cousins: Right, and about 15% of that the Government already conceded was lost to waste, fraud, and abuse.

Farron Cousins: Those three words they always use, waste, fraud, and abuse.

Mike Papantonio: They ship in, in C-130s, they ship in 12 billion dollars into Iraq, and then they say- when they start asking questions, where’s the money? And nobody knows where the money is because private contractors were handling that money too. Now, you see these cases popped up, they’re called whistle blower, qui tam cases, there are more whistle blower cases that popped up just in the Iraq case, the Iraq War than I’ve ever seen because it is a new way of doing business. And that’s why there are those multi-gazillion dollar homes all around Washington D.C. where these contractors and their lobbyists live. So now, what they’re gonna do is they’re gonna take the border case, they’re gonna take this abuse of children that took place for eight years under Obama, they’re gonna use that and say, well it’s gonna be worse under Trump, you would think, so we need you to hire us and we need another 140 billion dollars. And I gotta tell you, my projection on this case, if you look at the way they operate, it wouldn’t surprise me if by the time this is over just taking care of these children under contractor rates will be 40 or 50 billion dollars.

Farron Cousins: Oh, absolutely, and see what this also does though, why this is attractive to any administration, is because it then allows them to avoid the liability on it.

Farron Cousins: If a kid dies, or if we torture them, which is what reports are saying now, is basically what’s happening, ACLU has said it, the UN Human Rights Council has said that. But if it’s a private contractor, that shifts things a little bit. Then you can say look, I’m Jeff Sessions, I didn’t approve this. I didn’t know. We put them in charge, even though they hadn’t spend a day in their life taking care of children at this massive scale. I think the new tent city they’re trying to build could hold upwards of well over 1000 possibly as many as 5000.

Mike Papantonio: Important point and you raised it, but I don’t want this point to be missed. They’re already contracting for another four years.

Mike Papantonio: You see. They know this is gonna go on. This is like a new trough, a new piggy trough for the contractors and you’re gonna see them just being moved in there. Taxpayers are gonna be killed, the kids they’re supposed to be taking care of, we’re gonna see stories that continue. Not as bad as what we saw in the last eight years, I hope, but stories that tell the story about how contractors really work.