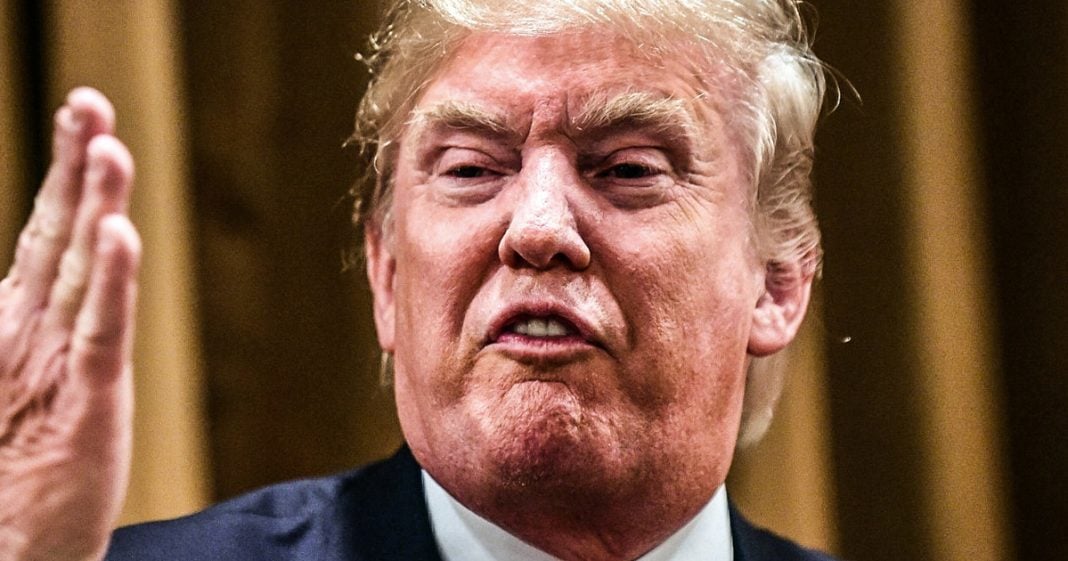 According to leaked transcripts of the President’s recent G7 meeting appearance, Donald Trump threw a major temper tantrum over NATO, claiming that the group was just as bad as NAFTA because the US is paying too much for it. The man has no clue how the world works and our longtime allies understand that this is very dangerous for the world. Ring of Fire’s Farron Cousins discusses this.

Well, it’s been a few weeks since Donald Trump’s G7 meeting, but we’re still actually finding out more and more information about some of the stupid things that he did at that meeting. The latest actually comes from a transcript from one of the officials there who was taking notes on everything that was said at the meeting, and it revealed that Donald Trump threw a massive temper tantrum over the US’ involvement in NATO.

According to the transcript, Donald Trump is absolutely pissed off about the fact that the US is paying more to NATO than anyone else. Technically, some European countries have not been paying what they were supposed to paying for NATO, but so far that really hasn’t hindered the organization whatsoever. If the US is paying more than everybody else, it’s because technically, as people always like to brag, aren’t we the richest country in the world? Aren’t we the best? Aren’t we the brightest? Why would you not expect us, with all of our boastful bragging, to be the ones to have to shoulder most of the responsibility for this organization?

But according to the transcript, Donald Trump went off on a tangent, said NATO is as bad as NAFTA ’cause the US pays in all this money and we get absolutely nothing in return, which that is completely false. The US is not getting nothing in return for NATO. Those are our very close allies. We need them and that is why we are a part of it. It is supposed to be to help us keep the peace, but in reality it’s morphed into something that’s more like just a bunch of buddies who wanna go to war whenever they wanna go to war.

Now, I’m not trying to defend NATO in any way. I understand they do a lot of crappy things all over the world and they’re currently involved in them. However, the United States does depend on them. Donald Trump is attempting to blow up that alliance. Why? Well, it actually has nothing to do with the money that we’re paying because later on he actually revealed the real reason. He believes that we need to just hand over Crimea to Russia. He’s really mad that our NATO allies over in Europe haven’t just done that. Why not give it to Vladimir Putin in Russia?

Now, this was part of the meeting. This is what the man said. As most people who’ve been paying attention to the situation understand, Russia has been weaken and undermine NATO for quite some time now. Basically, Donald Trump showed up at this G7 meeting, threw this temper tantrum in an attempt to do Russia’s bidding here. Now, this is not Russiagate hysteria. This is not new Cold War talking points. This is literally what happened at the meeting that is easily verifiable. There is no way to juggle around these facts. This actually happened. Donald Trump is out there advocating for these countries to hand over Crimea to Russia. If they don’t, he is going to go to a NATO meeting in just a few weeks and basically make the whole thing about money so that they can’t get anything else accomplished.

Donald Trump absolutely on at least this issue, most likely more, is doing Russia’s bidding for no reason, at least on the surface. We have to assume as rational, thinking human beings that there is a reason why Donald Trump is out there trying to advocate for Russia to our allies and alienating the people closest to us. Hopefully, somebody like Robert Mueller is gonna be able to figure out what that underlying reason is.