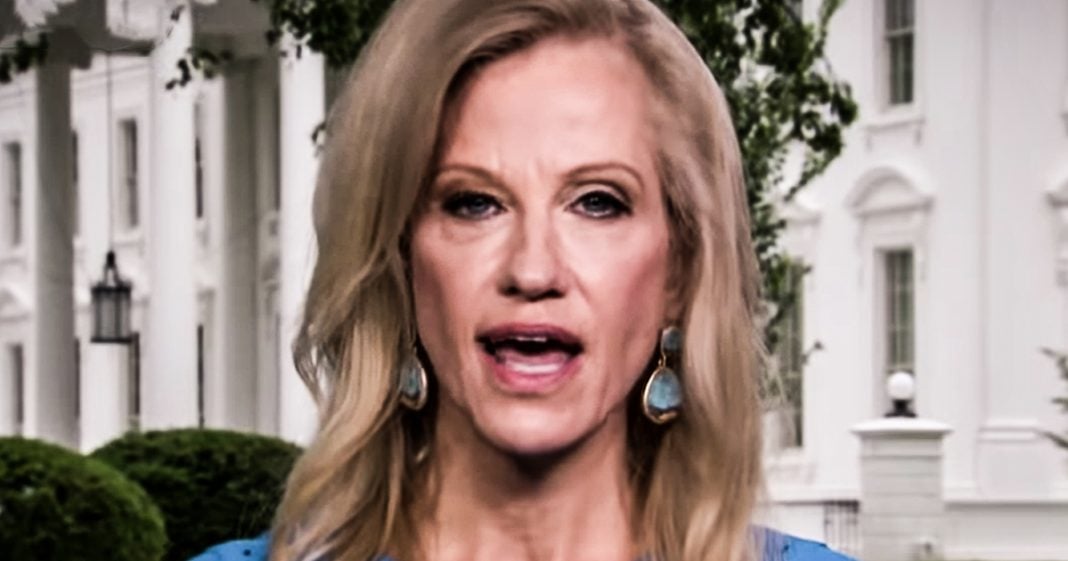 During a recent appearance on Fox & Friends, Kellyanne Conway demanded that Democrats start behaving in a mature, professional way. But then, unprovoked, she made sure to point out that Trump’s personal insults about people and their appearance are totally harmless. This administration is so hypocritical and clueless that it is almost painful to watch them. Ring of Fire’s Farron Cousins discusses this.

Speaker 1:
The White House is absolutely not ready to give up on their arguments that Democrats need to be more civil towards Republicans. On Wednesday, Kellyanne Conway appeared on Fox News to let us know exactly what she wants Democrats to do. Take a look.

Kellyanne C.:
My reaction is there’s a difference, Ainsley, between rhetoric, and the social media muscle, and cable news cohones, as I call it, that some people have, and crimes. People are inciting, asking for crimes or violence. In the case of that actor out, and who I’d forgotten about, out in California who’s got a new movie coming out, so I guess it’s a great fanfare. He actually had tweeted out that someone should go to her house and take her children, God forbid. I mean, this is not insulting, all the stuff that we’re used to around here, right?

Insulting what somebody said, or how they look, or where they work, or what they wear. This is calling for something much deeper. That’s very, very concerning to many people. There’s a difference between these stupid playground insults that people hurl at each of us and asking for more action, but people are calling for that. Also, let me just make clear, there’s no moral equivalence between quoting from a rally three years ago and what’s being said by a member of Congress on her official time asking for us to be, “Pushed back upon in public.”

Here’s the interesting thing about that little commentary she just gave. She’s demanding that Democrats behave in professional ways, she wants us to be more mature, she wants us to be respectful, but she did add the little caveat of the people who are out there insulting other people’s appearances, making kind of rude remarks about people on Twitter, that’s totally okay. In case you didn’t realize it, the person she’s referring to is Donald Trump. Kellyanne Conway in the same breath that she is demanding that Democrats act like mature human beings, actually gives the President a free pass for being quite possibly the worst human being in the United States alive today. This man has repeatedly gone on Twitter, even within the last 24 hours, and it doesn’t matter when you’re watching this, because that’s always going to be true, insulting people.

Insulting their appearances, making up bullyish nicknames for them, like Sleepy Eyes Chuck Todd, Crazy Maxine Waters, Low IQ Maxine Waters. All kinds of insults this man is lobbing at people, so Kellyanne Conway made it a point to let us know that those kind of insults, those are okay. That doesn’t fall under the needing to be civil to one another category and that is exactly why Democrats cannot fall into this trap. Do not let morons like Kellyanne Conway try to con you into being more civil, which by the way, there’s really not a lot of incivility among the left right now. They want to ask tough questions to these idiotic Donald Trump cabinet members that the press refuses to ask.

They want to know why they’re okay with locking babies in cages. They want to know why Scott Pruitt still has a job. If the media’s not going to ask those questions, then the American public has every right to approach them peacefully, not aggressively or violently, but to approach them and ask those questions. That’s not incivility, Kellyanne, that’s actually how this country is supposed to be working. You go on continue defending the horrible behavior of this President, the horrible things he says, the time he mocked a disabled reporter, because if you want to start with making people be civil, then you need to begin with your boss.