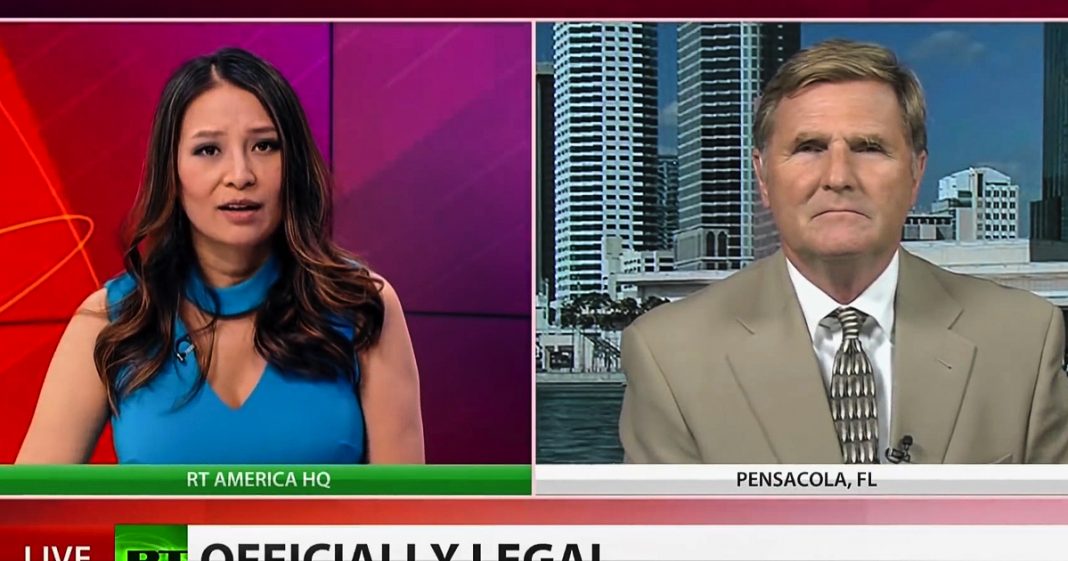 Via RT America: The FDA has announced it has approved a brand new drug derived from marijuana. Epi-Diolex is used to treat severe seizures and epilepsy. The drug contains CBD or cannabinoid which is derived from cannabis. CBD has the same benefits as THC, the main active chemical in marijuana, but does not produce psychoactive effects when ingested or consumed. This is the first drug approved by the FDA derived from marijuana and may signal a change in drug scheduling from the Drug Enforcement Agency. For legal analysis, RT America’s Manila Chan is joined by Mike Papantonio, host of America’s Lawyer.

Manila Chan: The FDA has announced it has approved a brand new drug derived from marijuana. Epidiolex is used to treat severe seizures and epilepsy. The drug contains CBD, or cannabidiol, which is derived from cannabis. CBD, for short, has the same benefits as THC, the main active chemical in marijuana, but does not produce psychoactive effects when ingested or consumed. Now, this is the first drug approved by the FDA derived from marijuana, and may signal a change in drug scheduling from the DEA. For more on this, we’re turning now to Mike Papantonio. Of course, he’s the host of America’s Lawyer.

Pap, great to see you. First, how big is this for the FDA to approve a cannabis-based drug?

Mike Papantonio: Well, the good news is the FDA’s decision to approve this treatment shows that they’re no longer able to deny the science that shows us that cannabis oil treatments are incredibly effective in certain kinds of conditions. For so long that we didn’t know, because the DEA wouldn’t even allow people to test drugs like this. The science and the trials that have been done showing that these marijuana derived oil type medications can treat seizures, they’ve been piling up for years. As a matter of fact, full disclosure, I own part of Charlotte’s Web, which is one of the first cannabis oils that was actually used to treat epilepsy. The name of the bill that was passed in Florida was called the Charlotte’s Web bill, which gave us the right to be able to sell this type of oil.

This decision’s going to allow people to get prescriptions for cannabis oils. It will now be covered under their insurance plans, which is a huge step for these patients that have been having to pay out of their pocket for these treatments. It should also give the agency the ability to fast track the approval of similar kinds of treatments derived from cannabis. It’s gonna open a whole new market of treatments for seizures, pain relief, inflammatory conditions. This is one of the most effective ways to help combat the opiod epidemic that we’re faced with. As a matter of fact, they’re now finding that they can use marijuana to treat opioid addicts. I think this is really important, especially for an organization that is just so abysmal as the FDA. You know, I’ve talked about the FDA for so long. It’s such a dysfunctional organization. I think they’re always pushed by corporate America. That’s what happened here.

Manila Chan: You’re saying that this is setting precedence for everything else to follow that could solve a lot of other issues that America has, like you said, with the opioid epidemic. But what legal thresholds would the scientists behind this or advocates and attorneys, what sort of legal threshold do they have to overcome for cannabis to meet before the FDA could approve this sort of medicine?

Mike Papantonio: No, we have a misunderstanding about the FDA across the board. The FDA is not really most of the time driven by really what I would call pure science. It’s driven mostly by corporate influence. That’s part of the problem here. This is what we have to worry about. Big pharma isn’t happy about the idea of being able to use cannabis oil unless it comes through one of their pharmaceuticals. Major drug companies were late to the party on medical marijuana, and the studies show that they’re already losing about $4 billion a year as more and more areas allow for medical marijuana and this cannabis oil.

So, the FDA’s decision is rarely really driven by just pure hard science, as you may not … These are the kind of cases I handle all the time, pharmaceutical cases. It’s abysmal the way the FDA makes decisions. Most of the time, the clinical-

Manila Chan: But Mike, what’s gonna happen? What’s gonna happen though if the DEA refuses to classify anything with a marijuana extract, including CBD … They still call it a schedule one substance, which means they don’t count this as having any sort of medical benefits. How are the two government agencies gonna square this or are people gonna get thrown in jail for having a prescription?

Mike Papantonio: Well, they’re now allowing some scientific research type of exceptions to what you’re talking about. That’s the type of thing that’s held us up for so long. These exceptions are gonna continue to grow as we find more and more states actually legalizing marijuana. At some point, the feds have to say okay.

Manila Chan: And real quickly Mike, I’d like to get your thoughts on Justice Kennedy, his plans to retire next month.

Mike Papantonio: Well, good riddance. He was always viewed as this swing vote who was gonna change things. Not really. He’s never been a swing vote. He’s been a conservative. So, no big loss.

Manila Chan: All right. I guess we’ve got to wait and see who takes his seat. Thank you so much, as always, sharing your expertise with us. Mike Papantonio, host of America’s Lawyer, right here on RT America.