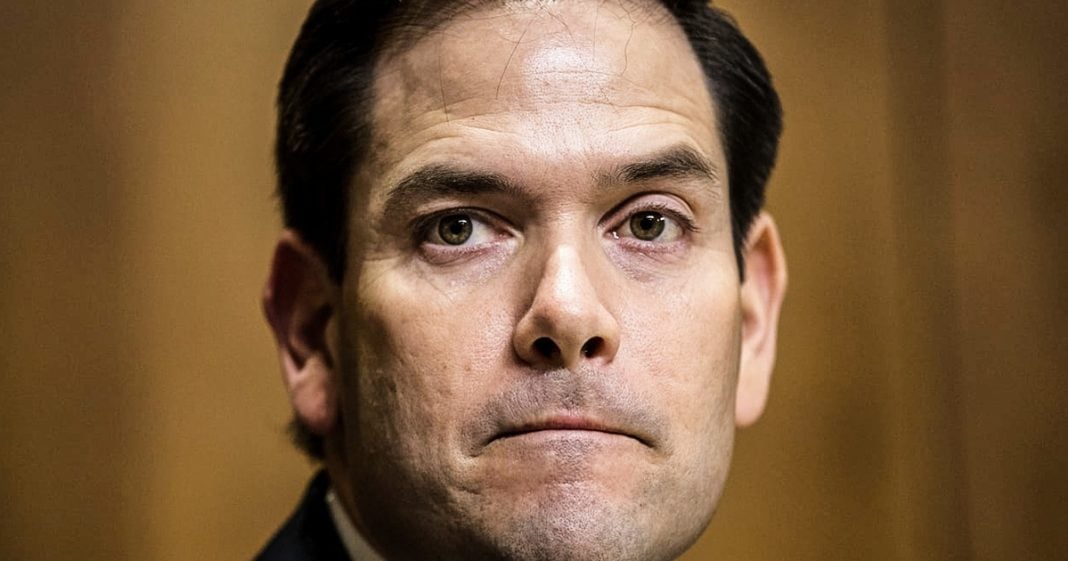 Republican Senator Marco Rubio tweeted out an accidental truth this week, saying that Republicans who disagree with Trump usually don’t come forward because the media is going to attack them anyway. So Marco is admitting that he’s afraid of the media, and that’s why he and his Republican colleagues won’t attack the President? This man is too weak to hold a public office, as Ring of Fire’s Farron Cousins explains.

Republican Senator Marco Rubio has finally admitted why Republicans refuse to stand up to Donald Trump. It’s not because they agree with him a 100% of the time so there’s nothing to stand up to. No, no, no, no. Rubio says that they disagree with him, you know, sometimes, but they won’t stand up to him because of the media.

Now, here is the exact tweet that Marco Rubio sent out explaining his position here. He says, “Many Republicans won’t criticize Trump even when they don’t agree with him because it means siding with the media that never cuts him a break, turns even little things he does into an act of evil, are also unfair to them and in the end will attack you anyway.”

If we can make a little bit of sense out of Rubio’s word salad here, “are also unfair to them.” That little clip there. I’m assuming Rubio doesn’t want to attack Trump because the media also attacks Trump. So if he is attacking, then he’s on the same side as the media that also attacks Rubio. So Rubio won’t attack Trump if the media is attacking Trump, because he doesn’t want to side with the group that’s also attacking him because he’s afraid of the attacks. Then he says, obviously they attack you anyway. That part makes perfect sense more so than that previous little snip, but Rubio is admitting that Republicans aren’t going to stand up to Trump, even when they disagree with him, even when they see him destroying this country because the media is still going to be mean to them and to him and to everybody.

If only that gosh darn media wasn’t so hurtful to the feelings of precious little snowflake Republicans like Marco Rubio, maybe they’d stand up to Donald Trump. Maybe they wouldn’t let him continue to destroy this country. Maybe he wouldn’t allow him to enact these tariffs that are driving people out of business in this country and wrecking the economy, but it’s all the media’s fault, right. It’s the media’s fault that Marco Rubio doesn’t have big enough testicles to stand up to big bad Donald Trump, because that’s what we’re talking about at this point folks. It has nothing to do with the media.

This is Marco Rubio trying to play both sides of it as he has brilliantly done ever since Donald Trump became president, and he’s admitting that he is too weak and too spineless and too gutless and too cowardly to stand up to a man that he knows is absolutely ruining everything great about both this country and everything about Rubio’s Republican Party. Not that there’s anything great there to ruin, but Rubio knows what kind of damage he’s doing. He just doesn’t have the fortitude to stand up to Trump or to even get a group of Republican senators to stand up to Trump to make him stop or try to rein him in.

Rubio’s tweet here is a great example, and I know Rubio is not up for reelection but plenty of these idiots are, of why everybody needs to go out and vote. I don’t want you to print out this tweet. I want you to keep it with you in your pocket or maybe take a screenshot of it and keep it on your phone. The next time Donald Trump does something horrible and Republicans remain silent about it, I want you to pull up that little picture of this tweet, and just remember that Marco Rubio is admitting that he and his fellow Republican colleagues are too terrified to stand up to the man destroying this country.