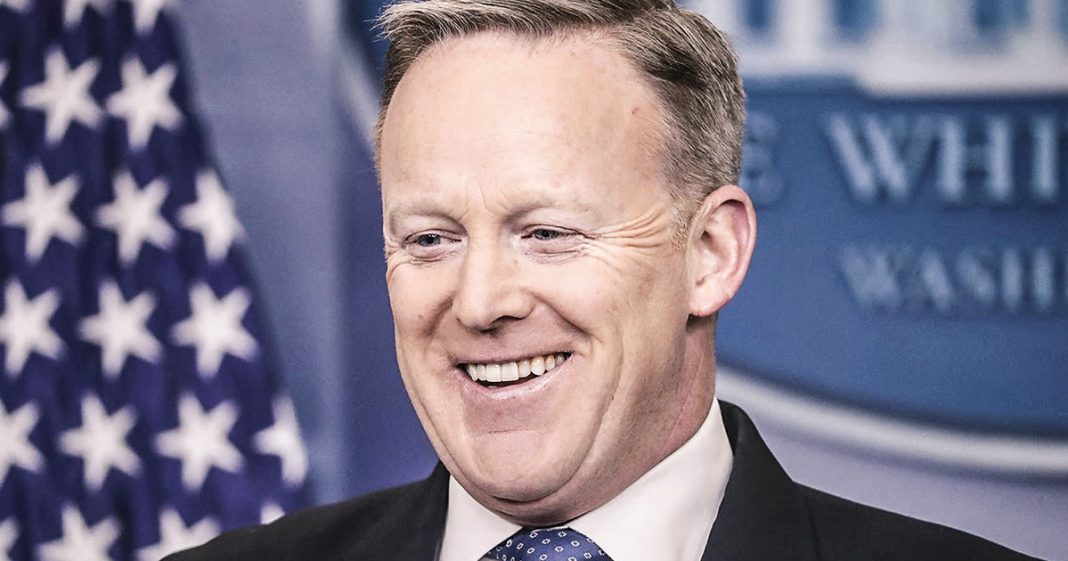 Sean Spicer is emerging from the metaphorical bushes that he has been hiding in since leaving the administration and he’s going to be filming a TV pilot to shop around to networks. No one asked for this, and since the man has no credibility to speak of, the likelihood of his show getting picked up is virtually nonexistent. Ring of Fire’s Farron Cousins discusses this.

There’s been a lot of talk recently, obviously, about Sarah Huckabee Sanders, the current White House Press Secretary, but what about Sean Spicer, the buy she replaced? Whatever happened to him? Well, after several months of trying to find a new job, only to be rejected by everybody who he applied with, Sean Spicer is finally, maybe, coming back to television.

Right now, Sean Spicer is currently working with a production group to develop a talk show. It’s going to be called Sean Spicer’s Common Ground. They’re looking to film a pilot sometime in the next month, and then they’re going to start shopping it around to networks. There’s not a lot of information available out there about this, but the New York Times did talk about the fact that Spicer has said he wants to talk about politics, but also get into things like sports and culture and maybe even marriages. Basically, Sean Spicer wants to become, I guess, kind of like a Maury Povich mixed with a Keith Oberman, maybe. I don’t quite understand exactly what he’s going for here. That seems like a broad range of topics for a talk show, but I can go ahead and tell you this: Nobody wanted this show. Nobody wants to watch Sean Spicer on television. And how do we know that? Because he’s already been rejected from all of the other networks including Fox News.

When he left the White House, he attempted to get a job as a contributor on Fox News, and they said, “Thanks, but no thanks.” Same thing with CNN. Nobody wanted to hire Sean Spicer because, just like Sarah Huckabee Sanders after him, Sean Spicer did nothing but lie to the American public, and he did so in a very combative way that made everybody hate him.

Also, you can’t discount the fact that SNL had quite a fun time making fun of Sean Spicer on a near weekly basis, and that further hurt his reputation, but nothing hurt him more than the damage he did to his own credibility, like that one time when he was hiding in the bushes because he didn’t want to speak to reporters.

My advice, Sean, is that nobody wants to see this show. Nobody wants to pick it up. Nobody wants to run it, and nobody wants to watch it. Maybe you need to go find some bushes to go hide in for another few months, until the public might be willing to accept you back onto their TV screens. But until then, we’ve got enough to deal with, with the former people of the Trump administration going on TV and lying to us on a daily basis, so we don’t need you added to that list of voices.