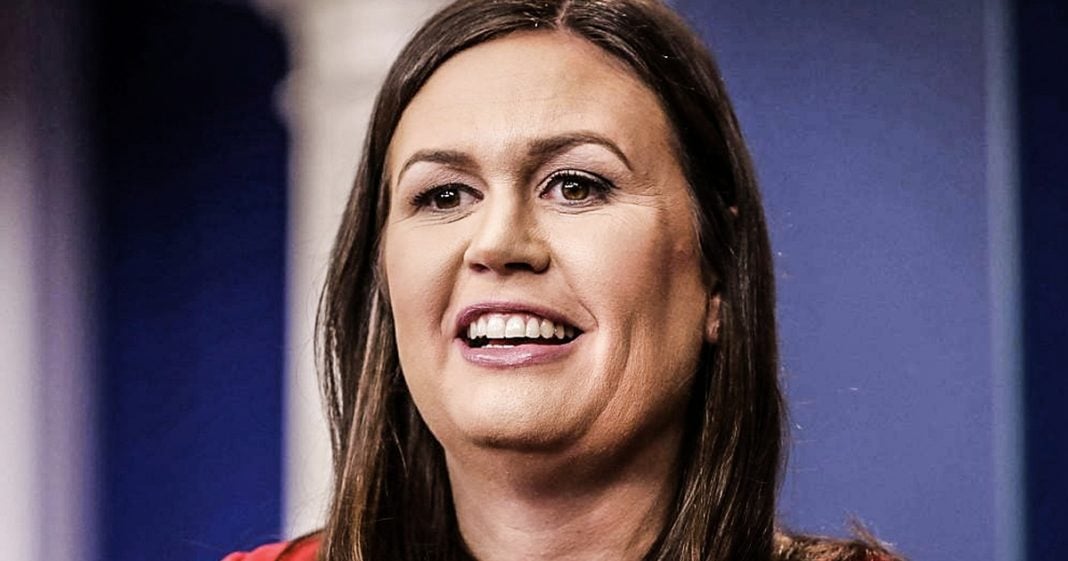 Taxpayers will, at least temporarily, be footing the bill for Sarah Huckabee Sanders’ new Secret Service security detail in the wake of the Red Hen “incident” where she was politely asked to leave the restaurant. Looks like the Secret Service will now have to protect her from any other mean restaurant owners as we continue to waste more and more money as a country. Ring of Fire’s Farron Cousins discusses how absurd this really is.

White House Press Secretary Sarah Huckabee Sanders need not worry about mean restaurant owners anymore because according to the administration, Sarah Huckabee Sanders, at least temporarily, is going to be given Secret Service protection at her home just to make sure that she doesn’t ever have another uninterrupted meal. Now that’s not the official reasoning given by the administration, but honestly, that’s the only conclusion that we could come to because as it stands right now, nobody has threatened her. It’s actually her supporters that are out there calling in the threats to the Red Hen Restaurant, the establishment itself, and the employees. They’re standing outside armed to the hilt, ready to take on anybody that goes in, but Sarah Huckabee Sanders is the one that’s going to get taxpayer-funded Secret Service protection.

This whole thing has gotten absolutely out of hand. Sarah Huckabee Sanders is playing the victim card better than I think I’ve ever seen anyone play the victim card. You were denied a meal. Okay? Not even that you didn’t get to eat that night. I’m sure you went somewhere else. You were also at the Red Hen Restaurant given a free cheese plate for your trouble, so you did technically get some food. The owner didn’t come out and grab you by the shoulders and throw you out into the street. No. They politely said, “We don’t want to serve you. We would like for you to leave. Don’t forget to take your cheese.” And that’s it.

Conservatives are acting like they held a knife to her throat and said, “If you don’t get out of here, we’re going to end you and everyone like you.” This is absolutely absurd. Conservatives have lost their damn minds. And I know that that statement implies that at one point they had minds so forgive me for that. But seriously, that’s what this whole hubbub is about. The fact that Sarah Huckabee Sanders didn’t get to eat dinner at her first choice restaurant on a Friday evening. And now we, I, me, you, everyone has to pay for her security detail because she’s a triggered snowflake at this point? That’s what this is about, folks.

There are not threats pouring in against Sarah Huckabee Sanders. She does not need Secret Service protection. She is not a victim. The real victims in this country are the truth, reality, the American public, the ones who have to put up with her lying to us on a daily basis, whitewashing the most horrible atrocities committed by this administration. Not only were we paying her salary to do this, but now we are the ones footing the bill for the Secret Service to be round the clock at her house until this whole Red Hen fiasco dies down.

This is absolutely pathetic, folks. I am so sick of this administration, of Conservatives in general trying to throw the victim card out. Puerto Rico is not fully restored. Flint doesn’t have clean water yet. Thousands of children that have been separated from their parents have no idea where their parents are. Some of them are so young they don’t even know their parents’ names so there’s no way to find them. Yet, the biggest concern of this administration is that Sarah Huckabee Sanders had to miss a meal.