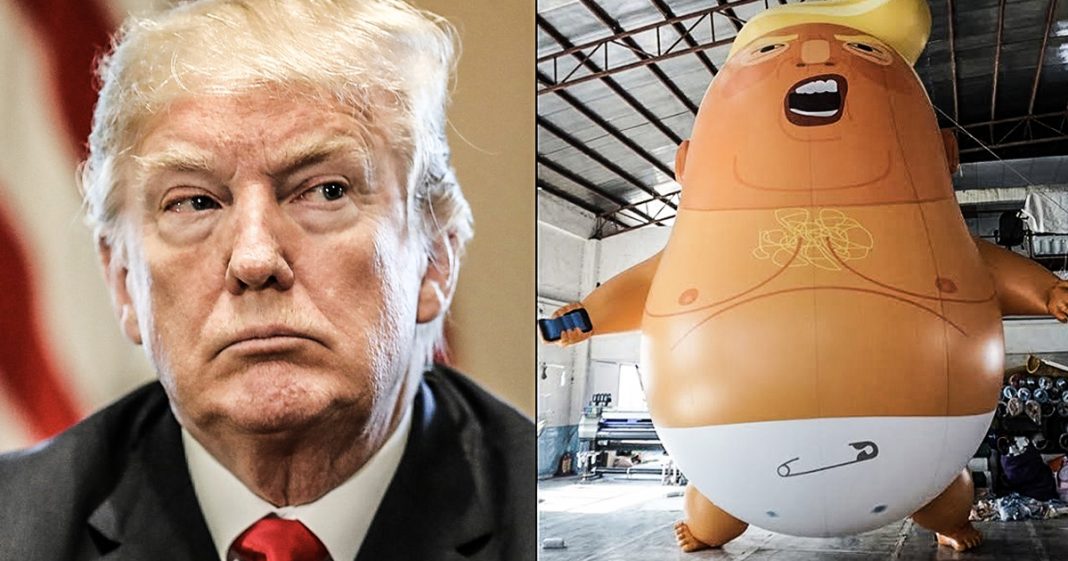 British protestors are planning on letting their disdain for the American president known to the world, and they are preparing to launch a 20-foot tall blimp in the shape of a giant baby version of Donald Trump – complete with diaper – in the air when Trump touches down for his visit. They understand that the best way to attack Trump is to attack his ego, as Ring of Fire’s Farron Cousins explains.

When Donald Trump touches down in the United Kingdom he is going to be greeted by a 20 foot tall blimp that is actually an image of a baby Donald Trump with a diaper. That is the form of protest that British protesters have decided is the best way to show Donald Trump that he is not welcome in their country and that they do not respect him.

This to me is one of the greatest forms of protest imaginable, because the people over there seem to understand Donald Trump in a way that a lot of the folks in the United States don’t quite get. Here’s an exact quote, this is from Leo Murray, he is the guy who organized all this, got the blimp together, raised the money to do it. This is what he says, and this is so spot on, “Moral outrage has no effect on Trump because he has no shame. He’s immune to it but he has a tremendously fragile ego, so ridicule is an effective form of protest. So we want to make sure that he knows that all of Britain is looking down on him and laughing at him.”

They’re going to make sure that he gets off that plane and where ever he goes, that there is a giant 20 foot baby Trump following him around the city, and they’ve made sure that if they can’t get the permit to fly the blimp, that they have already got a barge ready and they’re just going to have it on the barge. So there is no way that the president is not going to see this thing.

They’re going to make sure that he knows what the rest of the world thinks of him and it’s going to be interesting for Donald because one of the reasons he’d been putting off this trip was because he didn’t want to be met by protestors, so they’ve up it. They may not be in the streets, I’m sure there’ll probably be a lot of them though but they don’t have to be at this point because the biggest form of protest imaginable is going to be hovering over Donald Trump’s head through his entire visit.