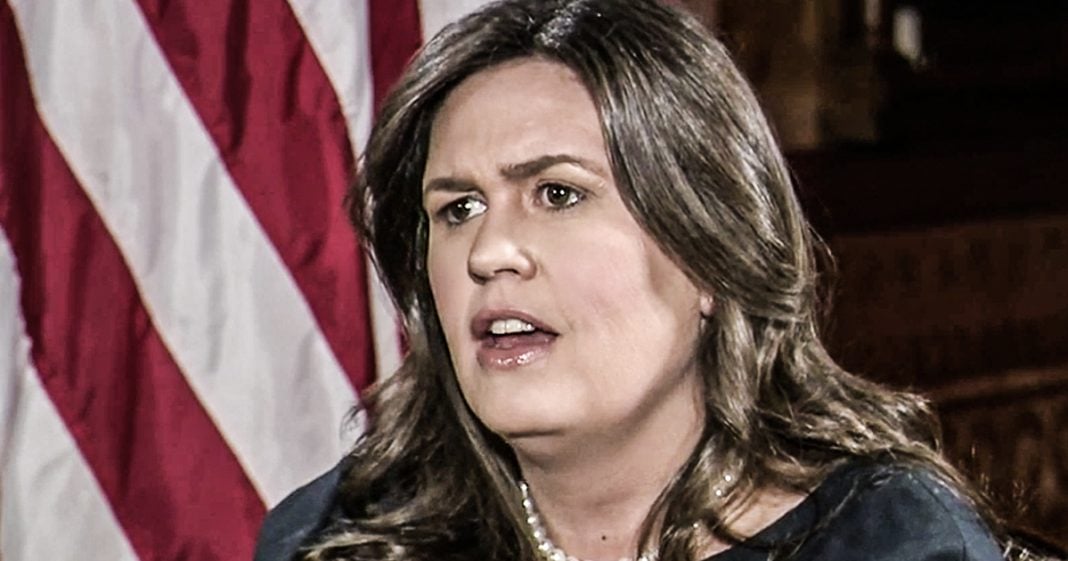 Sinclair Broadcasting Group has forced their local news channels to run a softball interview with Sarah Huckabee Sanders in an attempt to paint her in a more “human” light. Sinclair owns stations that reach more than 72% of Americans, and they have become the official corporate mouthpiece of the Trump administration. Ring of Fire’s Farron Cousins discusses this.

Recently the Sinclair Broadcast Group, which owns the local news stations that reach about 72% of people in this country, forced their news organizations to run a Bottom Line with Boris segment where he gave a softball interview to Sarah Huckabee Sanders and basically just let her rail on how horrible the media and Liberals are to her without ever having to address the fact that she’s actually a horrible human being.

Here’s a brief clip that these networks were forced to air.

Boris: The way many in the media treat White House Press Secretary Sarah Sanders is disrespectful and despicable. Here’s what she told me about her relationship with the press.

What would you say the reason is for some of the overarching and really over-the-line heat that you have faced from some folks, sometimes very personal? What is the root, you think, of some of the treatment you’ve received?

Sarah Sanders: I think some people, Democrats in particular, at some point they’re going to have to decide if they love our country more than they hate this president. And I hope that they’ll make the right decision in that process.

Boris: What is something that people at home may not know about you that they’re not seeing when you’re sparring with the media or representing the president?

Sarah Sanders: That maybe that I’m a little nicer than sometimes,

All right. So keep in mind again, these networks that Sinclair owns, 72% of the local news stations in this country were forced to air this segment. It’s what they call a must-run segment. There’s been a lot of talk about those. Recently Sinclair is tightening their grip on their little local news channels so they’re trying to force them to run this pro-Trump administration, pro-Sarah Huckabee Sanders propaganda because that is exactly what that clip is all about. It’s actually a two-part interview they did with her. One part aired June 21st. The other aired June 25th and at least 21 different states so far have aired this clip. Others plan on doing it in the very near future.