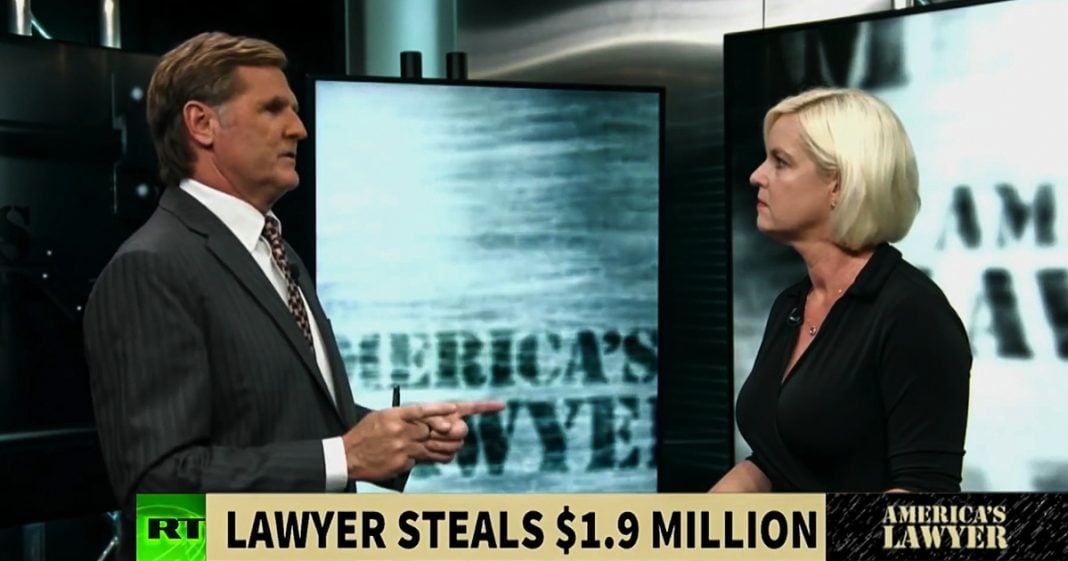 Via America’s Lawyer: Mike Papantonio is joined by Mollye Barrows to explain the case of a New Jersey lawyer who fooled elderly clients and stole nearly $2 million from them.

Mike Papantonio: Authorities say a lawyer who hosted a radio show stole about $2 million from six of his elderly clients. He faces multiple charges and says he’s going to challenge them in court. Joining me to talk about this is Mollye Barrows, legal journalist for the Trial Lawyer Magazine. Mollye who was this radio host and tell us about his story.

Mollye Barrows: Well, it’s pretty simplistic at the end of the day as far as what he’s charged with and he’s denying these accusations of course. But 66 year old Robert Novy, New Jersey attorney, prominent, had this high-profile radio show. He gave elder law seminars so he talked a lot about topics that were of concern to the elderly. That seemed to be the majority of his base.

Mollye Barrows: There you go. And unfortunately some of them did and at least six of these clients were taken advantage of according to prosecutors. They indicted him. In fact he was arrested back in 2016 so I’m not sure why it took so long for this indictment to actually move forward. But he’s basically charged with using power of attorney, using trust statements and getting control of their funds and then funneling it to his personal bank accounts and spending it on himself.

Mike Papantonio: One thing I’ve observed in the practice of law is it’s just like the practice of medicine. Rather than saying to somebody who’s done that, you know, there’s no second chance here. There’s no rehab. You were seen enough. You’re showing your side.

Mike Papantonio: We don’t need to see more. We’re not going to give you your license back. They do the same thing with doctors. Doctors, they may have five horrendous malpractice cases and the board that reviews it keeps saying, ah maybe he’s going to come around. I think there has to be a zero tolerance on things like this.

Mike Papantonio: But this guy had a profile because he did a radio show.

Mollye Barrows: Yeah. So he was automatically trusted by a lot of folks because they thought they know him and he was always talking about those elder law topics of concern if you will. But it turned out that some of these clients that he took advantage of were current. Some of them had passed away. Some of them also had Alzheimer’s or dementia. So he was, like you said, deliberately targeting people who were vulnerable and easily manipulated and essentially taking their money and putting it in his own accounts and then spending it on himself.

So in his defense his attorney said, no this was unintentional. He never meant to do any of these things. He would go the extra mile for his clients. But basically just on the money charge, money-laundering charge alone, which he has a first degree one. He has some lesser charges. If he’s convicted on that first degree money-laundering-

Mollye Barrows: He’ll face ten to twenty years as he should.

Mike Papantonio: Okay. So the point is, if he’s not convicted though, you still have this going on.

Mike Papantonio: I mean you don’t have that many complaints-

Mike Papantonio: … of stealing money. A track record And then have the bar association say, you know what, you’re one of us. We’re going to let you do it again. Some bar associations understand that. I tell everybody. I tell everybody, you know if they think something’s wrong and something doesn’t add up, then it probably doesn’t add up and they probably should take some action. And our only hope is that you can have the regulators say, okay enough is enough. One time on something this serious is enough.

Mike Papantonio: And you know what? He may be innocent at this point but right now when you see a pattern like that it usually adds up to something else.

Mollye Barrows: And he needs accountability not just in criminal court but also among his peers as well. Great point. Well, we’ll continue to follow this Pap. Thank you so much.

Mike Papantonio: Mollye thank you for joining me.