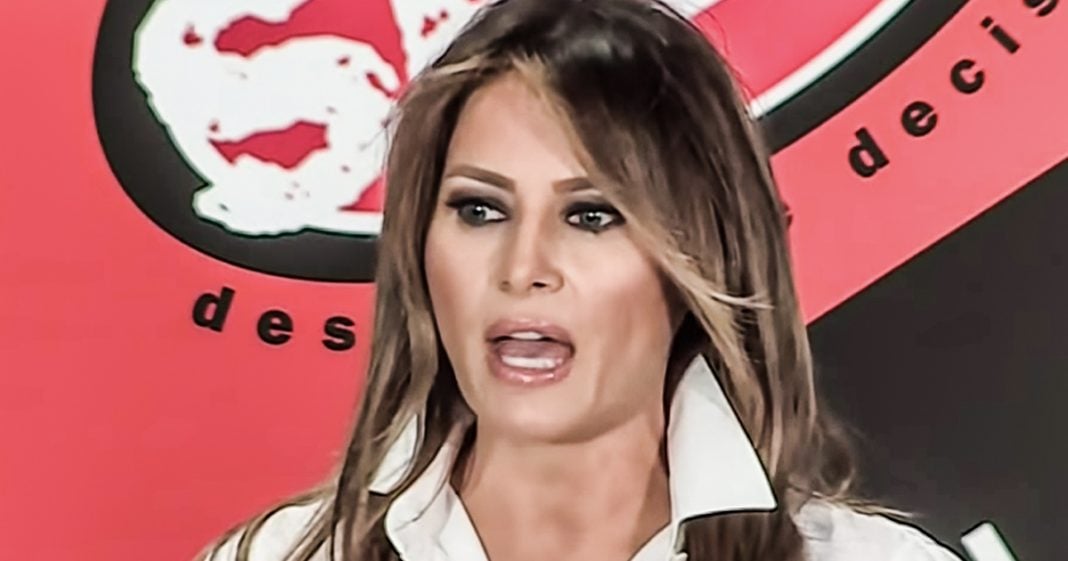 During a speech to the group Students Against Destructive Decisions, First Lady Melania Trump accidentally revealed why she won’t stand up to her husband’s bullying. In the speech, Melania said that it is easier to say nothing than to stand up to someone, which must be why she’s not addressing the horrible actions of the man that she married. Ring of Fire’s Farron Cousins discusses this.

On Sunday evening, Melania Trump attended the annual gathering of the Students Against Destructive Decisions, where she gave a speech about the importance of kindness, compassion and all of the things that we would like our children to have as they grow into adults. Here’s a brief snip of Melania Trump’s speech to that group:

See, what’s really interesting about what she just was finally able to say there is the last part: “It’s easier to say nothing than it is to actually do something and stand up to someone, perhaps a bully.” So she accidentally just admitted why she’s not standing up to her husband with his bullish behavior towards damn-near everyone in this country that doesn’t blindly follow him. Because it’s easy. Because it’s easier for her to sit in that White House and not say a word about him or to him than it is to actually do something.

So instead, she chooses to go out there, be this massive hypocrite about, “I want to stop bullying. I’m creating this Be Best campaign. I don’t really care, do you?” Melania is just like the rest of the group, folks. She is as heartless and as hypocritical as her husband. That’s why she’s not standing up to him. It’s not be she’s afraid of him, it’s because she doesn’t care that he does this. She supports it. She was a birther as well, questioning the validity of Barack Obama’s presidency and his birth certificate. She is a horrible human being. And we need to stop pretending that any one of the Trump family is anything but that.

But Melania, to go out there and act like she cares, or in some instances, like she really doesn’t care, is absolutely disgusting. She does not care if these children are nice, she doesn’t care what kind of human beings they grow up to be, because she got what she needed in life. She’s got money, she’s got power, she’s got fame and she’s got looks. So nothing else matters. It’s an absolutely disgusting and despicable way to go through life, but that is exactly what she has become.

There was a point when a lot of people, myself included, had a little bit of sympathy for her. You know, it felt like she was almost trapped in this marriage that she didn’t wanna be in, but now it has become increasingly clear that this is who she wants to be and it’s where she wants to be and if this is the kind of behavior you’re going to have, go out there, say one thing but do another behind closed doors, then you’re absolutely open for criticism and we are not going to hold back.

Your husband, at the same time you’re out there telling these kids to be kind and compassionate towards one another, is on Twitter assaulting and attacking people like Maxine Waters and Mark Warner, Democrats because they dare stand up to him. He’s calling them names. Chuck Schumer, Chuck Todd, anybody he can get his tweets out to, he’s attacking. And you’re saying nothing because you are complicit and complacent and most likely, you probably support everything your disgusting husband is doing.