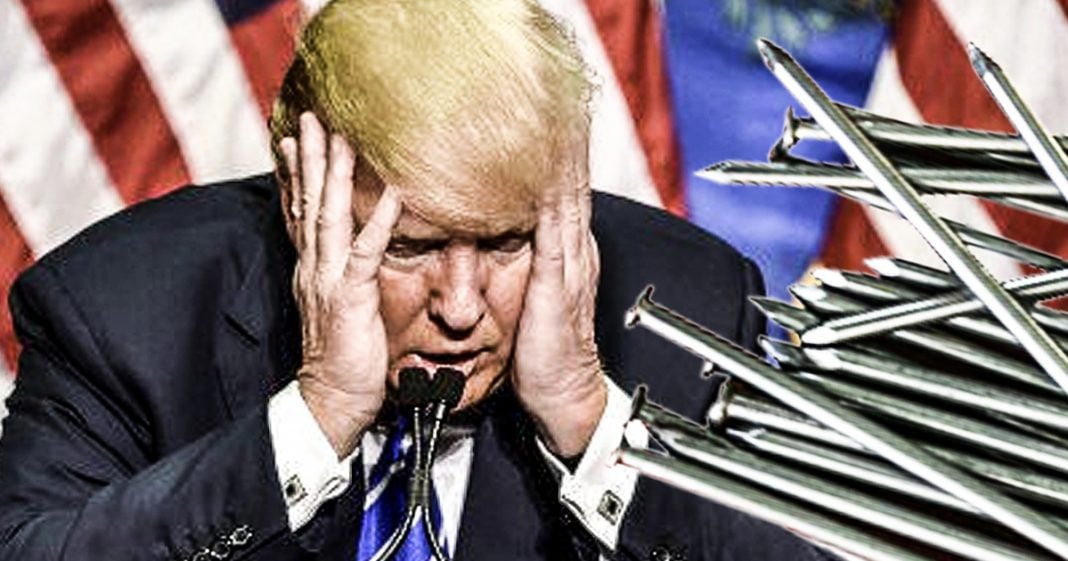 The New York Times recently ran an interview with George Skarich, one of the leading producer of nails in the United States. Skarich supported Donald Trump, but now that Trump’s tariffs have caused his sales to plummet and forced him to lay off hundreds of employees, he’s now begging Democrats to step in and help him. He can’t say he wasn’t warned this kind of thing would happen, as Ring of Fire’s Farron Cousins explains.

You know one of the things a lot of people like to ask us online is, “Should we have any sympathy for people who supported Donald Trump and now find their lives in complete shambles?” And the answer to that question is, “I don’t really know.”

This past week, a new report from the New York Times came out that told the story of an ardent Trump supporter who has now found his business absolutely destroyed because of Donald Trump’s tariffs. This isn’t just a local farmer. This isn’t a small business owner. This actually happens to be the vice president of the largest nail manufacturing company here in the United States, George Skarich. Skarich was interviewed by the New York Times about Donald Trump’s tariffs, especially on steel and aluminum that are effecting his nail business. Now he says he’s had to lay off hundreds of workers, I think upwards of 500 of his own workers, and he one hundred percent blames Donald Trump and his tariffs.

Skarich is a guy who absolutely, one hundred percent supported Donald Trump’s election. He voted for him, he got duped and now that Trump’s policies are absolutely destroying his business, he actually said that he is out there begging Democrats to come help him out. Specifically, he has said he is lobbying Democrat Claire McCaskill to do something about Donald Trump’s tariffs to help save his business.

Now listen, I have absolute sympathy for the 500 people or however many people have been laid off from this company, I do. But for a person like Skarich? Absolutely not. You know, I am so sick and tired of hearing these sob stories of people who voted for Donald Trump and then when he did exactly what he said he was gonna do, they start freaking out and say, “Oh my God! This is gonna ruin my business, my life. How am I going to feed my family?” You should have thought of that before you voted for him, idiot. It’s not like people weren’t out there warning you every, single day. I mean hell, it’s not like the President didn’t warn you he was going to do these things. I mean to his credit, Donald Trump has actually kept a lot of his promises. It’s just that his promises were absolutely horrible for policy here in the United States. Did you not think he was going to follow through with it? Because, he did and now you’re screwed. Well, I should say nailed in this case.

But nonetheless, I have no more sympathy for these people. You put yourself in this position. If we can help you, we’ll help you. That doesn’t mean I feel sympathy for you, but I do believe that when somebody’s down on their luck they should be able to get a helping hand. That’s never gonna change, but that’s the difference between Democrats and Republicans. This guy’s out there begging for somebody, a Democrat, to come save his ass after he realized that his own voting habits and his party affiliation have absolutely destroyed his company and destroyed the lives of up to 500 people who used to work for him.

This is gonna continue happening. We’re gonna hear more stories about this. Now, we do have some stories right now. Raw Story had a great one this morning talking about a farmer who’s losing tons and tons of money. His farm is going under because of Trump’s tariffs, but he still says, “If he could go back and do it all, he’d vote for Donald Trump again even if it meant his own financial ruin.” That’s why it’s very hard to have any sympathy for these Trump supporters who are finding their lives destroyed by the man that they put in office.