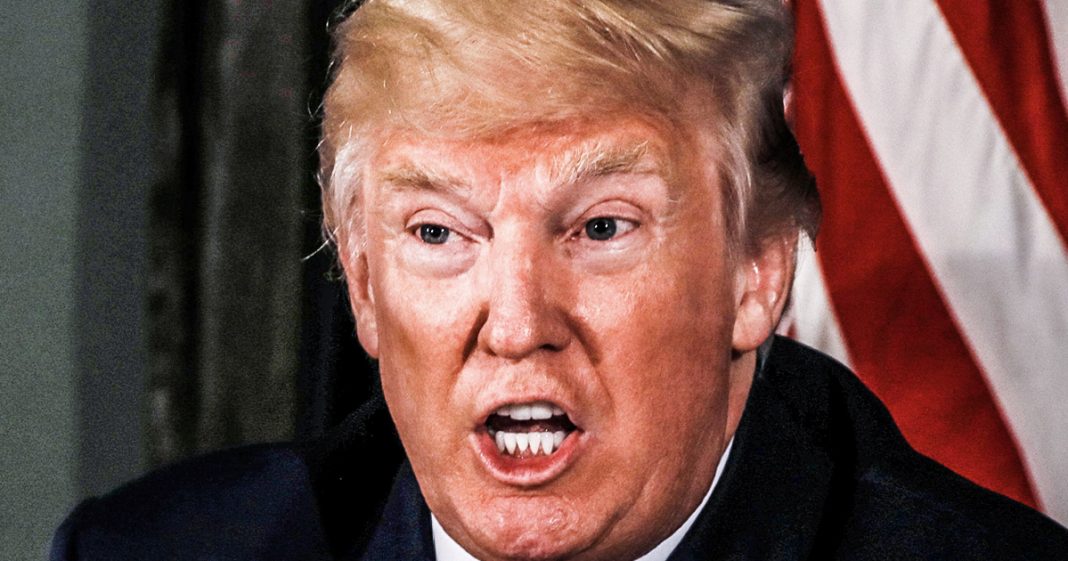 On Sunday, Donald Trump actually tweeted out that we should stop waiting on courts and due process for immigrants so that we can just “ship them back” where they came from even faster. This is a direct violation of the due process clause of the US Constitution, which absolutely also gives due process protection to immigrants. Ring of Fire’s Farron Cousins explains why Trump and his supporters don’t actually care about the rule of law.

Really the only job of the President of the United States is to honor, uphold, and protect the United States Constitution. That’s really it, I mean, as far as the job description goes. You’ve got to do one thing, and Donald Trump proved this weekend through his own Twitter feed that he is absolutely not willing to do that one thing, which is to protect the United States Constitution. This weekend, Donald Trump tweeted out the following here: “We cannot allow all of these people to invade our country. When somebody comes in, we must immediately, with no judges or court case, bring them back from where they came. Cannot accept all of the people trying to break into our country. Strong borders, no crime.”

First and foremost, let me just correct him here. You wouldn’t say “bring them back from where they came,” you would say “bring them back to where they came.” Just a quick little grammatical thing, since Donald Trump seems to really struggle with grammar and spelling and all that. But this idiot just suggested no courts, no due process, no nothing, no lawyers, no representation, snatch them up at the border and send them back to wherever it is they came to the United States from.

Now, here’s the thing. The United States Constitution applies to everybody in this country, legal or illegal. You walk into this country, you’re protected by that due process clause. That cannot be undone, except — and yes, there always are exceptions — if you are an illegal immigrant in the United States and you are captured within 100 miles of the border that you crossed, and you’ve been in the country for less than 14 days. Very strict criteria there in order for the due process thing to not kick in.

Most of the people that are currently detained here in the United States do not fall under that very narrow “no due process” clause, so everybody, pretty much, at this point is entitled to it. Because you know what happens when you take them and you lock them up for two, three weeks? You force due process on them, and that’s good, they need due process, they deserve it. And if somebody is apprehended within 100 miles of the border and they’ve been here under 14 days, if they’re seeking asylum, they still get due process as well. But we know that this administration has pretty much done away with asylum. They said they’re not going to grant it. If you’re fleeing violence, be it gang violence, domestic violence, war violence, whatever, they don’t care. They just want to send you back, and that is illegal as well.

Yet Trump is out there spreading this propaganda, using these words like “invade” and “infest,” while at the same time trying to dismantle one of the core protections of the US Constitution. Because think about it this way: Suppose we get rid of due process for allegedly illegal immigrants. What’s to stop them from stopping you on the street, claiming that you’re illegal, not giving you due process to easily say, “No, I live here, here’s my birth certificate,” and just shipping you back to wherever it is they made up that you came to the United States from? Nothing. The answer is nothing. There would be nothing stopping them from doing that.

So if you don’t speak up, if you don’t care about what’s happening to immigrants in this country, just remember that this is always just the first step. You go after one group first; once there’s none of them left, you move on to the next one. Do you really want to risk being that next one, or should we stand up and fight back against this administration that has no respect whatsoever for the rule of law in this country?