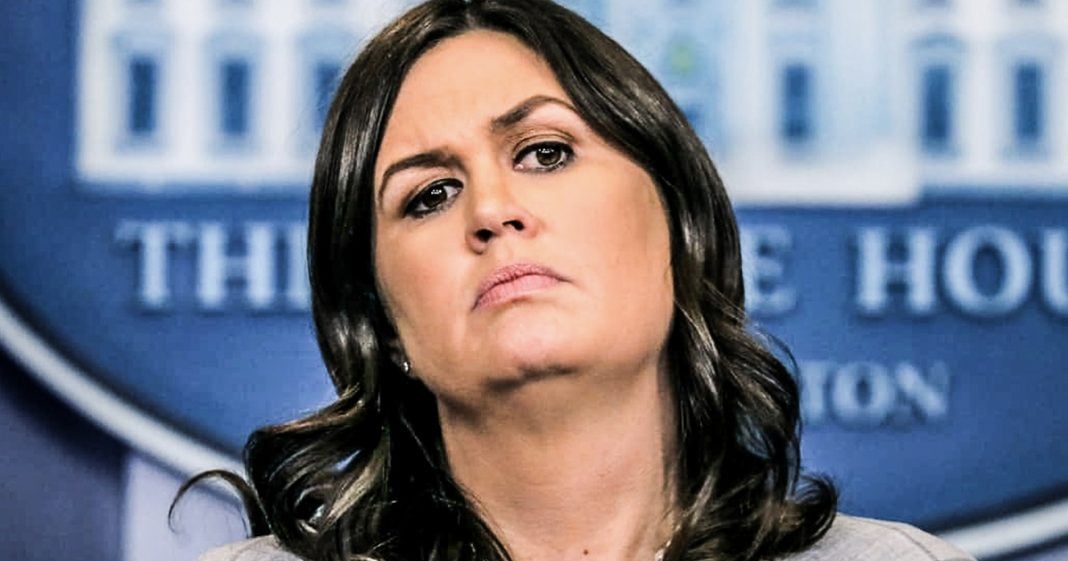 On Friday evening, Sarah Huckabee Sanders and several of her family members were asked to leave the Red Hen restaurant in Virginia by the owner after the staff voted to not serve her. This caused a combination of both praise and scorn online in the days that followed, and many conservatives took to the Red Hen’s social media pages to blast the restaurant for doing what conservatives have been doing to others for decades. Ring of Fire’s Farron Cousins discusses this.

On Friday evening, Donald Trump’s press secretary, Sarah Huckabee Sanders, obviously exhausted from a very long week of lying to the American public and avoiding reporters who wanted to talk about immigration, decided to head out with a few members of her family to go and have a nice relaxing dinner. Unfortunately for them, they weren’t able to exactly do that because the restaurant they chose, the Red Hen in Virginia, decided not to serve Sarah Huckabee Sanders.

Now the owner of the restaurant says that when she came in with her family, they all sat down so she went to the staff, the owner did, and said, “Should we or should we not serve her?” She let the staff vote on it. The staff said, “Absolutely not. For moral reasons, we do not want to serve this woman and her family.” So the owner told Sarah Huckabee Sanders that she would have to leave. Now on Saturday, Huckabee Sanders took to Twitter to confirm that this happened. Said, “It speaks a lot more to the owner than it does to her.” But does it?

I mean, listen. Republicans have been out there defending everybody’s right to refuse service to people based on their religion, their race, their sexual orientation, but here we have a restaurant that’s not basing it on any of those. They just said, “You’re a horrible person, I am a private establishment who can refuse service to anyone I want, so long as it’s not discrimination, and that’s what I’m doing. I am exercising my legal right to kick you out of my establishment.” Well, that reasoning is not good enough for conservatives, because they immediately freaked out, got online to the Red Hen’s Facebook page and their Yelp reviews and tried to tank this restaurant’s rating because they felt that Sarah Huckabee Sanders is a horrible human being.

Again, the difference here, because a lot of them are trying to compare it to the religious guy that wouldn’t bake a wedding cake for the gay couple, it’s not the same. There was open discrimination in that case. If you say, “I’m not going to serve you because of your sexual orientation, your race, religion, anything else.” That is illegal discrimination but if you say, “I’m not going to serve you because you’re a lying piece of crap.” That’s not illegal, there’s nothing wrong with that. That’s not stifling anybody’s free speech, that’s not infringing on any of their rights, that’s just a private business owner doing what they’re legally allowed to do. But what’s really interesting here, is all of the conservatives that came out of the woodwork, even some who’ve talked bad about Donald Trump, to defend Sarah Huckabee Sanders on this, saying, “The restaurant should have served her.” Really? As somebody who spent several years, basically most of my college years, working in a restaurant, let me go ahead and tell you, if the restaurant doesn’t want to serve you, I strongly suggest you leave because if you do end up making a stink and getting served, you’re not going to want to eat what comes out on your plate. Trust me.

So anyway, Huckabee Sanders is playing the victim here, when in reality, the entire country’s the victim in this instance. We pay her salary, she gets up there and lies to us every single day about things that we know we can easily verify are not true coming out of her mouth, yet she does it anyway. So I don’t feel bad for her and you shouldn’t feel bad for her, nobody should have any sympathy for this horrible woman just because she had to go find another place to eat her dinner.