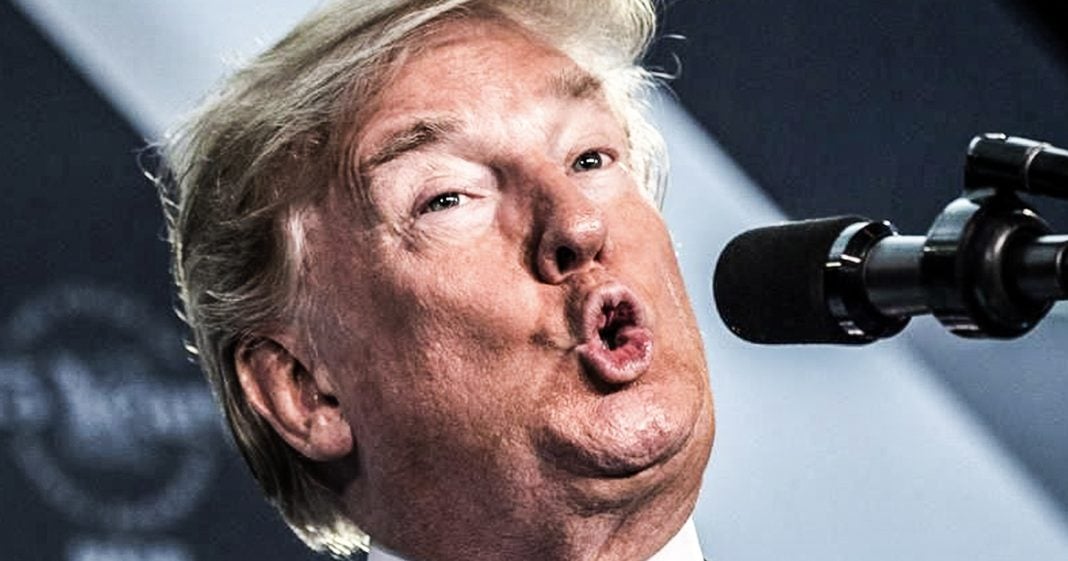 During a speech to the National Federation of Independent Businesses this week, Donald Trump accused Canadians of coming to the United States and smuggling shoes back to Canada in order to avoid tariffs. How are they doing this? One pair at a time, apparently, because Trump says that they are actually wearing the shoes in order to get them across the border. These are tourism dollars, but Trump and his supporters are too stupid to understand that. Ring of Fire’s Farron Cousins explains.

During Donald Trump speech earlier this week at the National Federation of Independent Businesses, he decided to talk about something that affects these businesses, NAFTA. Most of us, Democrat, Republican alike actually agree that NAFTA has been really, really bad. The United States has lost close to one million jobs as a result of NAFTA, and Donald Trump also thinks it’s a horrible trade deal. Unfortunately, Trump doesn’t think it’s a horrible trade deal for any of the legitimate reasons out there. He just thinks the U.S. got screwed. But during his little tirade, he started to tell a story that really just made him sound like a crazy person standing on a street corner yelling at passersby. Take a look.

Donald Trump:
Two days ago, in a major newspaper, talking about people living in Canada, coming into the United States, and smuggling things back into Canada because the tariffs are so massive. The tariffs to get common items back into Canada are so high that they have to smuggle them in. They buy shoes, then they wear them. They scuff them up. They make them sound old or look old. No, we’re treated horribly.

Apparently, there’s this big conspiracy that I guess all Canadians are involved in, where they just as a group descend across the border into the United States. They each buy one pair of shoes, I guess. They put them on, and I guess they leave their old shoes. So I don’t know what we do with those. They scuff them up and they just walk back across the border. That is what Donald Trump just told that crowd. This is the massive shoe smuggling ring that Canada is apparently running. Do you know how many people that would take to make this anything that would screw over the United States? They would have to be robbing warehouses full of shoes and somehow smuggling them back across the border.

What Trump is actually describing though, Canadians coming into the United States and buying a pair of jeans or buying a pair of shoes. Do you know what that is? Those are tourism dollars, you moron. Those are people who came to the United States because they wanted to visit the United States. They saw a thing in a store that they liked, so they purchased it. According to the U.S. duties and customs and all that stuff, it’s a little complicated, but if you’re in the U.S. for less than, I think, 24 hours, you have to pay a duty anywhere between 7 and 20% on goods valued over $200. Now if you stay over 48 hours, that bumps up to $800 before you have to pay any duties.

So we’re really not losing any money on a Canadian coming down here, going shopping, getting a pair of shoes or a pair of jeans, and then going back to Canada. People in the United States actually do that in Canada as well. Hell, we do it in Mexico. How many times do you hear a friend or relative or coworkers say, “I’m going to Mexico for the weekend” with their big trip, whatever, and they come back with all these little trinkets and souvenirs. They didn’t smuggle those in to avoid tariffs. They bought them because they were there and they wanted a souvenir.

Donald Trump is so stupid that he thinks these other business leaders there are stupid enough to think that there is some massive shoe smuggling ring being run out of Canada in an attempt to just screw over the United States and avoid tariffs. That’s where we are as a country, folks. We have a president who does not understand economic policy. I guarantee you he knows nothing about the 24- or 48-hour period and the financial limits. I promise you, he doesn’t know anything about those, and yet here he is lecturing people who run businesses about U.S. international economic policy. We are screwed.