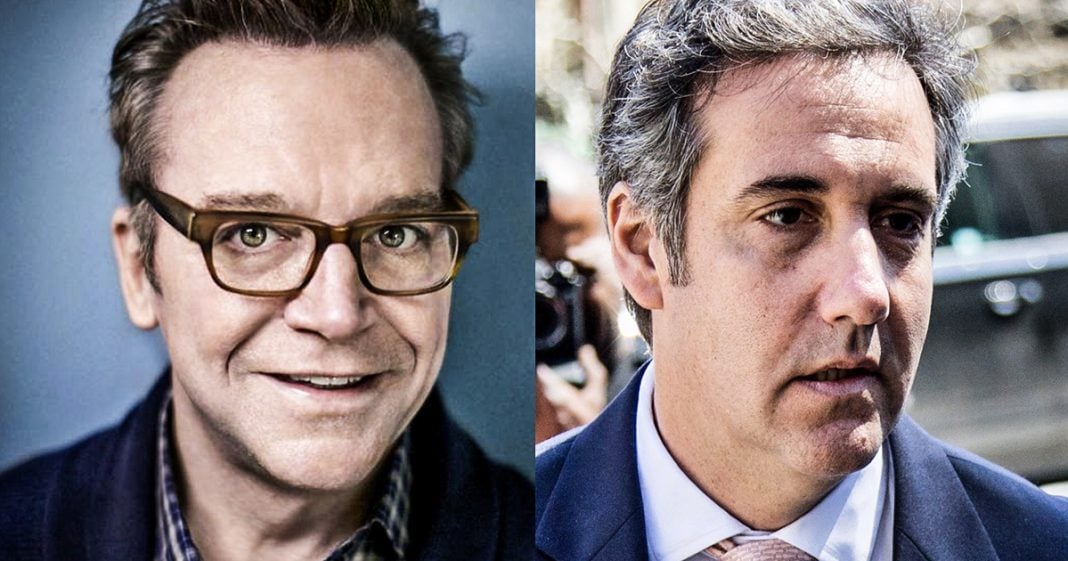 Comedian Tom Arnold tweeted out a picture of himself and former Trump lawyer Michael Cohen this week, and later made the claim that the two were going to team up to “take down Donald Trump.” Tom Arnold may not be the most qualified to overturn a presidency, but Cohen certainly has the information to do it, so we’ll see what happens. Ring of Fire’s Farron Cousins discusses this.

Tom Arnold, comedienne, actor, former husband of Roseanne Barr, and star of the movie The Stupids, says that he is working with Michael Cohen, Donald Trump’s former lawyer, and that they’re trying to come up with a plan basically to bring down Donald Trump. On Thursday of this past week, Tom Arnold tweeted out a picture of himself with Michael Cohen, and the picture just simply said “I love New York.” Cohen retweeted it, but then during an interview with NBC where Tom Arnold was explaining, he says that he’s working on a new program for VICE News. It’s called the Hunt for the Trump Tapes. So, what they’re trying to do is find any damning footage, really, of Donald Trump, horrible things he’s said, admitted to a crime here or there, or whatever, and they’re going to put that into this little series that they’re making.

The idea for it, Arnold says, came out after the Access Hollywood tape came out, because they realized if there’s one there have got to be more than that, so Arnold says he was meeting with Michael Cohen in order to obtain information that may be relevant for this series, and here’s what Arnold said about what Michael Cohen has. “This dude has all the tapes. This dude has everything. Guess what? We’re taking Trump down together.” That’s a pretty big statement. Now, I’m not a huge Tom Arnold fan. I think the guy’s, you know, kind of iffy, I guess would be a good word, but Michael Cohen on the other hand is a guy who at this point has nothing to lose. He’s already lost his friendship with Donald Trump. He’s already agreed, at least among his friends, to say that he’s going to flip on him and turn stuff over to Mueller, so why not work with Tom Arnold. This has the potential to be something very important, but it also has the potential to be a complete waste of time.

You know, I don’t want to be too down on Tom Arnold, but don’t you think we could have maybe a real investigative journalist, somebody out there kind of working on this. I mean Ronan Farrow has done some phenomenal stuff with regards to uncovering stuff for the Me Too movement and sexual assault. Maybe if he has a little bit of time that would be a good person to do this, because he’s a really great reporter. Not Tom Arnold though. We need somebody with a little bit more credibility. Somebody, you know, who actually has the power and authority within the journalistic world to have an impact, but I will reserve judgment for whenever this series comes out because maybe, in spite of all the odds against him, Tom Arnold will be the one to finally bring down Donald Trump. I wouldn’t get my hopes up though.