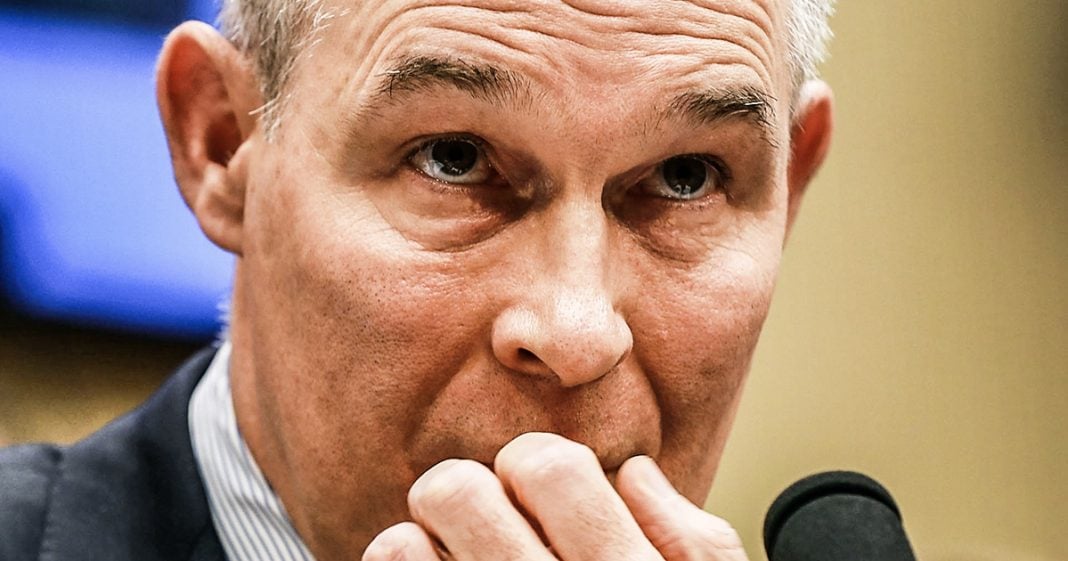 According to documents obtained by The Intercept, EPA Administrator Scott Pruitt spent $1,500 on “tactical pants and polos” as part of his official office expenditures. This man can apparently get away with anything, and too few members of the Republican Party are willing to stand up against the blatantly obvious corruption happening in their party. Ring of Fire’s Farron Cousins discusses this.

At this point, it really seems that Scott Pruitt, the administrator of the Environmental Protection Agency, it seems like he’s just screwing with us at this point. Like, he’s deliberately trying to do the most outrageous and stupid things just to see how much it’s going to take for the public, for the Republicans, for everybody to call for his removal from office. I mean, this guy has gotta be trolling this country in a way that we have never seen before because there’s no way, I mean there’s just no way, any human being could be as stupid and corrupt as Scott Pruitt is. Here’s why I say that.

But again, at this point, the only way I can stay sane is to just imagine that Scott Pruitt’s just trolling us at this point. This isn’t real. He’s only doing it to show how silly he can be, right? I mean, at some point, Ashton Kutcher’s gonna come walking out of the EPA and tell us we all got punk’d. I’m 100% certain that that has to happen, otherwise, Scott Pruitt is 100% the dumbest and most corrupt person to ever serve in the federal government.

Let’s also not forget, while we’re talking about this idiot, the fact that he is actively out there trying to destroy the environment, destroying decades worth of environmental protections, most of them put there by Democrats, but even some that were put there by Republicans. He is dismantling all of it. He’s screwing over taxpayers for things like special pins and magical pants, all so that he can reward Republican donors with a few fewer regulations. I hope it’s worth it, Republicans. Because everything Scott Pruitt does at this point, that’s on you. You voted for this administration, you voted for Republicans, you are responsible for all of the insanity coming out of Scott Pruitt’s office.